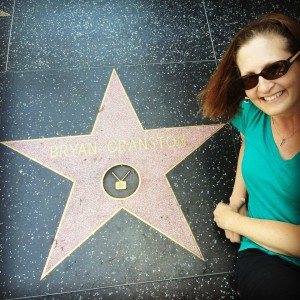 When I first met Walter White, I was in pretty bad shape. Incapacitated by my own depression and anxiety, I couldn’t bring myself to concentrate on much of anything. But the moment I began watching Breaking Bad and laid eyes on that desperate man trembling with a gun in his signature tighty whities, a bullet-riddled RV smoking in the desert behind him, I was transfixed. A struggling high school chemistry teacher diagnosed with inoperable lung cancer, Walt turns to a life of crime with his former student Jesse Pinkman, producing and selling crystal meth to secure his family’s financial future before he dies.

I had always hated—actually, feared—violence and bloodshed. As a high school sophomore, I fainted during a filmstrip about making tourniquets. As a result, the drivers’ ed department exempted me from viewing Red Asphalt, a body-strewn movie produced by Highway Patrol in my home state of California. But the next year I fainted in my U.S. History class as my teacher simply described his Vietnam injury. Well into adulthood, I continued to experience all manner of dizziness, nausea, and cold sweats when faced with suffering.

So why did I take instant interest, even comfort, in a man who lurched down a dirt road with unconscious, poisoned men rolling around the floor of an RV? Why me, the girl who did not attend one drinking party in high school or college and who has never lit, snorted, or injected a thing? With every reason to fill my mind with good things, why did I keep wanting to return one of the most disturbing TV shows of all time?

Walt, and just about every other character on the show, is a wild mess of unbridled human darkness. Watching them can make anyone feel better about their relative mere foibles. At least I’m not disappearing bodies in barrels of acid!  But I don’t believe mine is a case of moral superiority and its false reassurances.

Walking with Walt—and heartbreaking Jesse—in their desperation, a desperation more intense than what I face in my everyday worries and imbalances and fights with kids, comforted me because it made me feel more human. Life is far from stable for them, but they still get up every day with the power to make choices, as flawed and fraught as those choices are. I knew I could do the same.

As Walt says in the first episode, after Jesse questions him about his new direction in life, “I am awake.”

Messed up, but awake.

Even as I began to find more chemical and emotional balance, I stuck with Walt. I couldn’t leave him alone in the mess he was making of his life. When he stared at the broken plate in the trashcan and realized what he had to do with his captor, I felt the weight of my own daily decisions churning in my gut. When he shaved his head for the first time, I felt parts of my old self fall away as I tried to make the best of who I was.

Walt always returns to past scenes from his life to “fix” things, much to the detriment of others. This summer, I had to make some amends as well.

I grew up just twenty miles from Hollywood but had never visited. The iconic sign and Walk of Fame were as mysterious as the pyramids to me. Though I was raised in a virtual wonderland of sights, a place people fly to from all over the world, my parents didn’t like the stress of going much of anywhere. LA equaled the ends of the earth.

Visiting Hollywood was not a “bucket list” item as much as filling a gap, another California wound I had nurtured in my disdain and fascination for the state I had left. I’ve had to admit that parts of me remain—my childhood anxiety mixed with the messy glory of a quaking, sunny, polluted, adventurous, and stifling place as ugly and beautiful as my soul.

After buying cheap T-shirts (my son’s has already shrunk to the size of a sports bra), squealing at Chihuahuas in handbags, and snapping shadowy pictures of filthy sidewalk stars from Charlie Chaplin to Johnny Cash to Marilyn Monroe, I sought what I had really come for, the only star I was willing to touch, Bryan Cranston, who plays Walt.

In front of the Redbury Hotel at 1717 Vine Street, among smashed gum, cigarette butts, and the exhaust of an armored car, I lay by my favorite actor’s name. My husband snapped a picture as the sizzling ground burned my elbows. Somehow, I’d made things right. 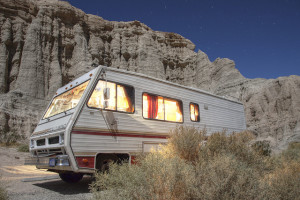 My hero is a middle-aged meth manufacturer, liar, thief and murderer, who convinces himself that his love for himself, his “growth, decay, and transformation”—the way he describes chemistry—is love for others. “Hero” is probably the wrong word. But I can watch Walt for hours, live in the deepening crevices of his face, ride his emotions and lies. This is what humans are capable of. I am not with Walt, but I can feel what he feels. And what feelings. By the grace of God wake I.

The Apostle Paul exhorts the Philippians to dwell on what is true and lovely, and I have heard many believers exclaim,  “Breaking Bad? No way. We have no business watching shows like that.” But I think of the darkness of Job and Revelation, God’s witnesses bleeding at the hands of others or their own, or for reasons we will never know.

Suffering may not be lovely, but it is true, and truth is lovely enough. Because truth is alive. Truth is dangerous. Truth is the one who knocks.

The image of Tania Runyan with Bryan Cranston's Hollywood star belongs to the author.
The Creative Commons image entitled "Wes's RV at Redrock Canyon State Park" is attributed to David~O on Flickr. .