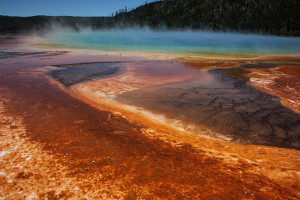 At Grand Prismatic Spring in Yellowstone National Park, brilliant orange and yellow microbial mats ring the turquoise blue water. Spreading outward from the scalding-hot pool is a thin whitish crust across which shallow water flows, depositing minerals as it cools. The water makes its way to the nearby Firehole River into which it sizzles and steams.

Across the glistening crust, bison tracks meander in the direction of the pine-covered hills. Humans cross this surface on boardwalks, but bison take their chances on the crust. Bison skeletons, boiled clean, have been found in hot springs, testifying to the risk.

Park visitors love to see the geysers, hot springs, and large animals, including the bison and elk. But in terms of the overall wellbeing of the biosphere, indeed, of their own well-being, they should probably consider the microbial mats, which are composed of abundant and diverse archaea and bacteria that thrive on the potent brew of chemicals and geothermal energy.

Everyone knows about bacteria, but many people do not know about archaea, one of the most ancient life forms on Earth. Their ignorance is understandable, because to acquire even a rudimentary knowledge of archaea requires a person to grapple with difficult science, the kind that shatters long-standing ideas. Such knowledge can feel unsettling at first, like walking on crust.

When they were first identified, scientists thought archaea were found only in hydrothermal environments, such as deep ocean vents and hot springs, but it is now known that they are ubiquitous, even living in the human gut. Although they seem to be simple, they are complex chemical powerhouses that are critically important to maintaining Earth’s biogeochemical cycles.

Originally classified as some kind of odd bacteria, they are now a third kingdom, the other two being bacteria that do not have a cell nucleus, and eukaryotes that do (animals, plants, etc.). In some ways archaea are more closely related to humans than they are to bacteria.

It was only twenty years ago that the first complete archaean genome was determined. The lead researcher on the paper, published in 1996, was Carl Woese, a microbiologist at the University of Illinois, Urbana-Champaign. Trained at the undergraduate level in mathematics and physics with his PhD in biophysics, he jokingly referred to himself as “a molecular biologist turned evolutionist.” His unconventional academic training enabled him to see microbiological problems with fresh eyes.

Woese began his genetic sequence research in the 1970s motivated by his desire to understand how evolution worked leading up to the emergence of genes, a point he called the Darwinian Threshold where the classical theory of evolution began. Because Darwin lived in the nineteenth century, he did not have the ability to study life at the molecular level; he was forced to look at whole organisms from which he formulated his idea of natural selection.

Working at the molecular level, Woese postulated that horizontal gene transfer between different organisms, instead of vertical transfer (e.g., descent from parent to child), could have led to rapid evolutionary change and the rise of complex organisms. Only then could natural selection come into play.

However, horizontal gene transfer does not end at that point. For example, it is a factor in the increasing problem of antibiotic resistance as genes from resistant bacteria are transferred to non-resistant bacteria. It also is at the heart of the burgeoning field of genetic engineering.

On the basis of his extensive study of ribosomal RNA (rRNA) using polymerase chain reaction, Woese and his colleagues redrew the tree of life, making archaea its own kingdom. This initially met with ridicule, but as supporting data mounted and gene-sequencing technology became more powerful, the ridicule turned to acceptance and then to praise.

Eventually, archaea would have been classified correctly with or without Woese. However, he advanced science considerably by opening up a new way of learning. Most microbes cannot be cultured in the laboratory. Woese showed that the sequencing of rRNA genes could prove the existence of a microbe without its being cultured. This had ramifications far beyond microbiology.

Yellowstone played a part in Woese’s research. He visited Octopus Spring in the 1980s where two of his students were researching archaea in hot alkaline water. Another student did important work on microbial mats at Mammoth Hot Springs.

It wasn’t Yellowstone’s megafauna (its bison, bear, elk, mountain lions, and wolves) that interested Woese. Bacteria and archaea were the true rulers of life in terms of their vast numbers. But everything was open to question. In an interview, he was asked to define life. “That’s the problem,” he replied. We can’t.”

Woese, who died in 2012 at the age of 84, is now considered a towering figure who revolutionized microbiology and ecology and reconfigured evolution as an interlinking web where genetic translation of information matters more then the shape of a bird’s beak or the appearance of wings. The implications of his work are profound, from how life originated on Earth to the nature of extraterrestrial life.

In A New Biology for a New Century, Woese said, “Our task now is to resynthesize biology; put the organism back into its environment; connect it again to its evolutionary past; and let us feel that complex flow that is organism, evolution, and environment united. The time has come for biology to enter the nonlinear world.”

The above Creative Commons image of a microbe pool in Yellowstone National Park and is attributed to Steve Jurvetson on Flickr.