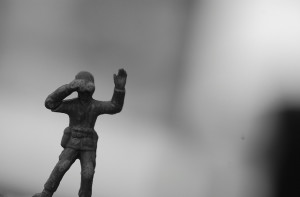 He was despised and rejected by men, a man of sorrows, and familiar with suffering. Like one from whom men hide their faces he was despised, and we esteemed him not.
—Isaiah 53:3

Six or seven years ago, a coworker of mine played a drunken game of chicken with a semi-truck on his bike at ten o’clock at night. His funeral doubled as a memorial service and an Alcoholics Anonymous meeting.

My coworker, whom I will refer to as Flip, was an adjunct member of the faculty in the same university department that employed me as a lecturer. Flip was in his early forties, wore horrible Hawaiian-print shirts, and spoke with the glibness of a used car salesman.

“Got any advice on how I can butter up the ol’ boss and get a full-time job like yours?” he once asked me. Nope, not really, Flip.

I refrained from attending his funeral, but two of my coworkers went—out of obligation more than anything else. Neither of them knew him particularly well. They drove home absolutely gobsmacked by what they beheld that night.

A woman who never met Flip, who probably only attended the event for the AA meeting, offered to improvise a song in his honor based on one of the psalms. The pastor who officiated over the funeral did not know Flip either. Midway through the funeral, he announced his intentions to adopt Flip’s children since no relatives had come forward to file for custody. When the AA portion of the event began, one of the group leaders noted Flip had not attended a meeting in months.

When’s the last time any of you saw Flip? I imagined him saying. I doubt he ever dreamed he’d attend his next meeting in a casket.

My coworkers left the funeral feeling like Flip had not left much of an impression on anyone. In my mind, he had been a greasy blotch on the fabric of the faculty in my department. I guess if he was a human stain, he was the kind that came out in the wash with ease.

Fast-forward six or seven years to the day before Christmas Eve.

My friend and former coworker Bryan, who attended Flip’s funeral, sent me a text saying another coworker of ours—a man as slippery and strange as Flip—had died at the age of fifty-one after the onset of a sudden illness.

This coworker—a man I will refer to as Al—had also reminded me of a used car salesman. His comments about women were as ugly and outdated as the plaid suits worn by the cartoonish hucksters on TV. An adjunct member of the faculty like Flip, Al had asked Bryan for advice on landing a full-time teaching position at the university.

“I don’t know what to tell him, Chad,” Bryan said to me. “I don’t think he’s going to get that position.”

Even though Al annoyed me, I knew Bryan considered him a friend—at least insofar as one can befriend a person one pities. It humbled me to see Bryan reach out to a man I dismissed as a reject.

When Bryan called to invite me to see the film Dodgeball with him and Al, I reluctantly agreed. I knew Jesus loved rejects, and I figured I should, too.

Al smuggled a package of Twizzlers into the theater. After sharing his candy with us, he snickered, “Those Twizzlers were in my ass!” He’d apparently seen one too many films depicting drug mules hiding forbidden cargo in bodily cavities. Even though he clarified that he’d only stuffed Twizzlers down the back of his pants, I was in no hurry to eat more.

I was in even less of a hurry to be Al’s friend after that. Bryan and I laugh about this incident now. “I hope he didn’t try to smuggle any Twizzlers into the afterlife.” We have nothing else to say, I suppose.

Sometime before I left the university to pursue a PhD I would never obtain, Bryan told me Al’s wife was thinking of leaving him. Al laughed when he told Bryan about it, but I suspected grief bubbled beneath the surface like black oil. My heart ached for Al, and I had no idea why.

The next time I thought about Al was when Bryan told me he had died—some six or seven years later. Even though I thought of Al as a reject, I felt a surprising sadness when I learned of his demise, which only increased when I realized his obituary did not mention a wife.

As I think about Flip and Al now, I see how inaccurate I was in appraising their worth. I realized almost immediately after hearing about Al’s passing that I felt loss over his death because he had been worth something all along. He and Flip were both bearers of God’s image, and created to love and be loved by God and humanity.

When I encounter people like Flip and Al in the future, I hope to remember the words of musical maverick Larry Norman, the godfather of Christian rock. On his deathbed in February of 2008, he said, “I feel like a prize in a box of Cracker Jacks, with God’s hand reaching down to pick me up.”

The image of God treasuring a rinky-dink trinket from a box of Cracker Jack has stayed with me ever since I read about Norman’s passing. It makes me think of Jesus, who saw worth in people where others only saw worthlessness. I, too, want to see “the least of these” as beloved by God—jewels not to be mistaken for junk.

Al’s obituary described him as Catholic. I know nothing of Flip’s religious background. I can only hope that when God removed them from this life, he regarded each of them as a child regards the plastic ring he finds under clusters of caramel corn and peanuts: with a bliss that would baffle any jeweler.

Chad Thomas Johnston is a slayer of word dragons who resides in Lawrence, Kansas, with his wife Rebekah, their daughter Evangeline, and five felines. He has written for Image Journal’s Good Letters blog, In Touch magazine, The Baylor Lariat, and CollapseBoard.com. Johnston’s first book, the whimsical memoir Nightmarriage, was a finalist for a 2013 Shirley You Jest! Book Award in nonfiction writing.

The above royalty free image is attributed to Steve Snodgrass on Flickr.