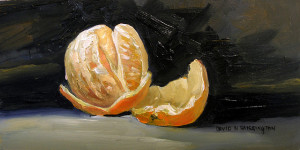 In his book Culture Making, Andy Crouch notes that the only way to change culture is to make more of it. You want a better communication device? Come up with something that will replace the iPhone. Hate your rolling pin or your lawn mower? Come up with a better one.

Annoyance, in some ways, is the mother of invention.

Each semester I teach a course in which Culture Making is a major text, so my students can repeat this dictum by heart—in fact, they do, in nearly every class, and I suspect they have it tattooed on their forearms.

The artists in the class understand the idea instinctively.

But what about the rest of us? Those of us who don’t paint or dance or sculpt—what do we do?

Crouch also talks about “cultivators”—the gardeners. In my little Brooklyn backyard we have both grass and garden beds, and most of what I do out there is cultivating: bringing order where chaos once reigned. I plant in neat rows. I pull up weeds. I water, when I remember. I pick things before they bolt.

When I write criticism or teach in a classroom, I’m doing the same thing. I look at the untamed weeds of the film industry, or of undergraduate minds full of ideas but not much order, and I bring order by introducing points of connection and organizing principles.

Only after cultivation happens can creators come in and do their work effectively.

But there is a third role in this that I think sometimes gets overlooked.

I regularly collar people and insist they read Robert Farrar Capon’s The Supper of the Lamb, first published in 1967 and selected by Ruth Reichl for inclusion, in 2002, in the classics of food writing series published by the Modern Library.

Capon was an Episcopal priest who wrote theology books on Jesus’s parables and was also an enthusiast of home cooking. He wrote for The New York Times on topics like bread and breakfast. He saw cooking and eating for delight—in the midst of an increasingly mechanized modernist food system, characterized by soggy vegetables in cans and tasteless, pre-sliced white bread, and a fixation on lowering one’s calorie intake—as the place where love and spices, theology and wine, butter and grace met in a place both impishly irreverent and sacred.

The kitchen for Capon was holy ground, with a side of parsley.

And yet: while Capon is no enemy of professional foodstuff creators (the vintners, the cheesemakers) or of professional cultivators (chefs and critics), he sees a third group of people as essential, and so do I.

These folks, he calls the “amateurs,” or sometimes the lovers.

If you paint, or write, or love to cook, you know who he means, instinctively: they are the people for whom you make things. They are the audience. They are the receivers of the gift.

Amateurs are vital for the work of culture care. Amateurs turn art into art by completing it with their own experiences. They reflect wonder and joy to the experience. They let culture flourish with their resources, attention, prayers, and enthusiasm.

But being good at being an amateur requires cultivating the right frame of mind, training the right shape into our attention and our hearts.

I can’t think of anyone else better to explain that than Father Capon. Any lover of culture or the world should heed his words:

The world…is a gorgeous old place, full of clownish graces and beautiful drolleries, and it has enough textures, tastes, and smells to keep us intrigued for more time than we have. Unfortunately, however, our response to its loveliness is not always delight: It is, far more often than it should be, boredom. And that is not only odd, it is tragic; for boredom is not neutral—it is the fertilizing principle of unloveliness.

In such a situation, the amateur—the lover, the man who thinks heedlessness a sin and boredom a heresy—is just the man you need.

There, then, is the role of the amateur: to look the world back to grace…. Peel an orange. Do it lovingly—in perfect quarters like little boats, or in staggered exfoliations like a flat map of the round world, or in one long spiral, as my grandfather used to do. Nothing is more likely to become garbage than orange rind; but for as long as anyone looks at it in delight, it stands a million triumphant miles from the trash heap.

That, you know, is why the world exists at all. It remains outside the cosmic garbage can of nothingness, not because it is such a solemn necessity that nobody can get rid of it, but because it is the orange peel hung on God’s chandelier, the wishbone in His kitchen closet. He likes it; therefore, it stays. The whole marvelous collection of stones, skins, feathers, and string exists because at least one lover has never quite taken his eye off it, because the Dominus vivificans has his delight with the sons of man.

Fr. Capon suggests that being a great amateur means we learn to think boredom is a heresy, heedlessness is a sin. It means we train ourselves to be attentive to beauty wherever it is found, however flawed it is.

Great amateurs start from a posture of embrace, and instead of seeking to make ourselves feel better about ourselves in the culture we experience, we are always looking for hints of grace wherever they may be found.

People of faith, those called to pour out their lives on behalf of others, should be the best in the world at this. So often we’re not.

Great lovers of culture look the world back to grace—necessary and neglected work. If we’re not doing it, who will?

A version of this essay was delivered as a talk during an event hosted by the Trinity Forum at the National Press Club on June 1, 2015.