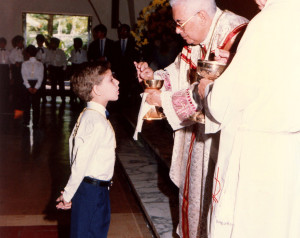 So, this meal is not like other meals. It is a meal that challenges my desire to have control of what goes into me and how. In this meal, I like to feel I’ve surrendered something, that I’ve become vulnerable standing there at the foot of the altar with my mouth open, giving someone else the power to do what they will.

The other day, the younger priest at my church misfired in his attempt to give me communion. He’s not like the older priest, who sticks the wafer right in there, saliva be damned, germs be damned, all of it be damned.

The younger priest, who is a good man all told, worries about viruses and colds and the transmission of disease. And his hand wavers. He doesn’t want to get too close, the younger priest. Because of that, and surely without ever intending any harm, he has become a Host-chucker.

The other morning at Mass, he chucked it a little too hard. The Host bounced off of my outstretched tongue and went sailing. For a moment, the young priest’s physical instincts kicked in. He almost made a grab for the falling Host, trying to catch it before it fell.

Something held him at the last minute and he let it fall. There it was on the ground. “Oops,” he said, smiling weakly. Then he bent down, and picked it up, and tucked it into his robe somewhere. I never saw it again.

I wanted to go back into the sacristy after Mass and ask him about it. I wanted to discuss this episode of the fallen Host. I was curious about what happens to a consecrated but spoiled Host. It had been in my mouth, after all, for a fraction of a second.

The Host was mine. And then, it wasn’t. Just after it bounced out of my mouth, I looked at it there on the floor of the church. A panicky sort of thought invaded my mind: “What is that thing? What is it really? What do I believe that it is?”

That’s what I wanted to ask the young priest. “What happened to us out there?” I wanted to ask. “Has everything gone funny? Did we just prove, accidentally, that we have no idea what we are doing here, taking and giving communion?”

Instead, when mass was over, I walked back outside to the parking lot and got in my car. I drove the few minutes back home as I do every morning. I tried to forget.

A few days later, a book happened to fall into my hands. “Oh, did it,” you say to yourself knowingly, “did the book just fall into your hands, or were higher forces at play?” Well, I don’t know the answer to that. The book, you see, is by a Buddhist monk.

Why would God send me messages about the true nature of the Holy Wafer through the writings of a Zen Buddhist monk? I don’t know. I do know that this monk, Thich Nhat Hanh, seems to have a special relationship with Christ, strange as that may sound. He wrote a book called Living Buddha, Living Christ.

In that book, you will find the following words:

It is ironic that when mass is said today, many congregants are not called to mindfulness at all. They have heard the words so many times that they just feel a little distracted. This is exactly what Jesus was trying to overcome when he said, This is My body. This is My blood. When we are truly there, dwelling deeply in the present moment, we can see that the bread and the wine are really the Body and Blood of Christ and the priest’s words are truly the words of the Lord. The body of Christ is the body of God, the body of ultimate reality, the ground of all existence. We do not have to look anywhere else for it. It resides deep in our own being. The Eucharistic rite encourages us to be fully aware so that we can touch the body of reality in us. Bread and wine are not symbols. They contain the reality, just as we do.

Was that what lay helpless on the floor that day in church? Was it the “ultimate reality,” the “ground of all existence” lying on the ground?

I think that’s exactly what it was, and what it always is. “This is Holy Communion,” writes Thich Nhat Hanh, “to live in faith. When we practice this way, every meal is the Last Supper. In fact, we could call it the First Supper, because everything will be fresh and new.”

Sometimes it takes a mistake, a kink in the normal workings of the world, a Host dropped ingloriously on the floor, to draw attention to what is true.