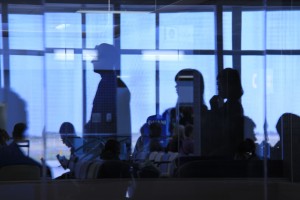 I was walking down a concourse in the Philly airport when I looked up to see the Famous Writer staring down at me. Actually at first glance I was sure I was looking at the British actor, Bill Nighy. But it was not. It was him, a well-known literary writer who had moved to Maine ten years ago.

I was stunned, but kept on walking to the food court, where I ate a seven-dollar hot dog and thought about the writer. It was strange to see someone famous, especially someone from Maine. I was already back there in my mind, feeling safe with all the stolid types waiting at the nearby gate.

I knew he traveled far and wide; his writing was all about looking for something—the American soul? About this, I was not sure. But I knew the search was his concern.

I had considerations about him. I had last seen him at a reading I attended years before when I lived in Portland. Perhaps that was how he remembered me, although the reading was full of other middle-aged women. Later I read one of his short stories, in which he remarked, “Women who go to lectures always want something.”

I did not like that, although it has its truth. One wants, seeing the famous, to be lifted out of the self, to be part of their world, atop the frontier of writing. But so often, they disappoint, seem smaller and less generous in person. More like the rest of us.

I had read some of his books. His was the terrain of Walker Percy and Cormac McCarthy, a version of modern American anomie—vague malaise, adulterous meetings in Hyatt hotel rooms of mid-size cities. The excitement of being lifted out of the self, the possibility, and the letdown. Always the self remaining, a little emptier now, spent and disappointed.

It was a dim vision—not without a moral dimension, but dim. I wanted there to be more to it, more beauty.

Sure, we’re all fuck-ups, I thought, but look at the beauty of our strivings, our foolish, unachieved hopes. Not the ennui of “look at me, look at me” reflected in the cheap veneer of hotel room bedside tables. To my judgmental eye, this seemed part of the writing culture he inhabited, which also said “look at me”—the conferences and MFA programs with their elaborate narcissism, artsy young women hovering around aging, famous men, the discussions of “trying to write,” the angst and grabbing for something, anything.

It was not for me, not at my age. But perhaps it no longer was for the writer. In a recent book, a character says of Maine, “They have a high opinion of themselves here. They seem to admire virtues you can only understand by suffering difficulty and confusion.”

That was true, I thought—the endurance and the fatalism.

The writer was—surprise—reading as we waited to board. On the plane, I was seated in the row ahead of him. I covered the title of a British mystery with my hand. If only I had brought Dostoevsky, I thought, but it would have weighted down my hand luggage. I was afraid to talk to him, and doubted he would look at my book, but did not want to be diminished in his eyes.

We landed late that night in the Portland, Maine, “jetport,” as it amusingly styles itself, with its twelve empty gates. There was a baggage delay. “They were sleeping!” an unshaven, flannel-shirted guy joked. I hoisted my bag. The writer was on his cell phone. I glanced at him, but he did not look at me.

I was going back home through the dark, back to my neighbor, Sonny, who drives to work at 4:30 in the morning, waking me with his backfiring truck. Back to the “dark and lonely work,” as the writer had once called it, when he was younger. Back to the hardest thing—not to look at oneself, but the page and its pale, blank expanse. To which, I reflected, the writer had gone home as well.

Originally published as “Famous Writer” in Good Letters May 1, 2009.

Ann Conway has published in Commonweal, Maine Arts Magazine, Faith and Leadership and other venues. Her essay, “The Rosary,” originally published in Image Journal, was placed on the notable list of Best Spiritual Writing 2011. She received a fellowship from the Collegeville Institute in 2013 and received her MFA in creative writing from Seattle Pacific University.  A former regular blogger for Good Letters, she currently writes at “Commonplaces” where her subjects are often disability, Maine, the voiceless, and spirituality.