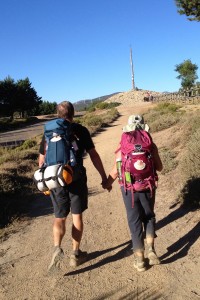 My Uncle Jimmy died in September at the age of ninety. Born in Sicily, he immigrated to New York when young and served in the U.S. Army during World War II. He was the husband of my aunt for sixty-one years, the frolicsome father of my two cousins, a regular part of my life until I married and moved away.

I can still see my uncle clearly as he was in January 1994. The way his brown eyes sparkled. The way his thick hair swept back from his forehead. The way he arm-wrestled my four-year-old son to laughter, easing tears caused by my father’s death.

That was the last time I saw my Uncle Jimmy. Almost twenty years ago.

On the day my Uncle Jimmy died, I didn’t even know that he was ill. He’d lived in Florida for two decades and I in Seattle for three. Through those years our correspondence was limited, consisting only of Christmas and Easter cards with a few scribbled pleasantries. Some years, even cards were lacking.

No, on the day my uncle died, I wasn’t at his bedside hugging him. Instead, I was in a Spanish cathedral embracing a very different Jimmy, not one of flesh and bones, but of gold-plate and jewels, the bust of Saint James, apostle of Jesus, whom Spaniards call Santiago.

According to Christian tradition, after Jesus’ resurrection, James traveled to the Iberian Peninsula to spread the Gospel. Upon returning to Jerusalem, he was beheaded, becoming the first Christian martyr. His acolytes carried his corpse to Palestine’s coast and placed it on an unpiloted boat that miraculously crossed the Mediterranean, passed through the Strait of Gibraltar, and landed on the shore of Spain among the fiord-like rías of Galicia.

In Galicia, the body was buried in a small shrine and the town of Santiago grew around it. By the twelfth century, an immense Romanesque cathedral had been built over James’ tomb and was attracting half a million pilgrims each year. People walked there from all over Europe, hundreds and hundreds of miles, crossing mountains, valleys, plains, and rivers, risking starvation, dehydration, injury, raids by bandits, death. For them, the pilgrimage was an enactment of the spiritual journey to God and the hardships were tests of faith.

Today, hundreds of thousands of pilgrims annually walk El Camino de Santiago, The Way of Saint James, or simply, The Way. Heads swathed from blazing sun, blisters bursting in boots, backs bent under packs dangling emblematic scallop shells, they now come from all around the world and include believers and non-believers alike. During the last two weeks of my Uncle Jimmy’s life, my husband and I were two of them.

The Way is very much like leapfrog. Though the most traveled route is 500 miles long and starts five miles from the Spanish border in the Pyrenean foothills of Saint-Jean-Pied-de-Port, France, some pilgrims walk from farther points—Rome, Zagreb, Warsaw—others from spots nearer Santiago—Pamplona, León, Sarria.

All along The Way, pilgrims encounter each other, walk together for a distance, talk in spontaneous pidgins of English-Spanish-French-German-Italian. They lose each other at rest stops or to slow or quicken their pace, then rediscover each other at intervals of minutes, hours, days.  On the road, in restaurants, and in refugios, they bond through a cycle of challenges, triumphs, chow, chat.

We spied our first fellow peregrinos in an otherwise empty hotel breakfast room on the morning we set out from León. They were sitting at another table, a chic Spanish-speaking couple in brand new hiking gear. Finishing our pastries and coffees, the four of us stood, heaved our packs, smiled—neither my husband nor I speak Spanish—went outside and found the route. We walked neck in neck for hours. When the road split, we turned left and they turned right.

Two days later we recognized them in a restaurant in Rabanal, heard them speaking English to another couple, introduced ourselves. By the end of our conversation, we’d come to know them as Miguel and Liliana from Colombia. By Villafranca, we were dining with them, sharing insights on how to deal with blisters, manage backpacks, parent children, face midlife.

Likewise, in bits and pieces on The Way, we came to know Kyung Mi from Seoul, who clicked her walking sticks on gravel, offered me a parasol when the sun grew hot. And the group of students from the Catholic Newman Center at University of Washington, who early mornings shared the glow of headlamps and song-filled sunrise prayers. And Matteo from Genoa, who climbed a mountain pass with me, insisting I practice my Italian to distract me from my bleeding feet.

When pilgrims reach Santiago, they embrace in front of the cathedral. Strangers only weeks before, they now regard themselves as friends. Together they enter the cathedral and walk their last steps together up stairs that lead behind the altar. There they hug the gilded statue of Saint James, then descend to the Pilgrims’ Mass.

At Mass I gazed around me at hundreds of peregrinos, many now dear. People who had walked into my life, touched my heart, and would soon depart. People like so many others—my parents and grandparents, lost neighbors, colleagues, friends—who had once been marvelously present but had vanished due to distance, distractions, death.

I wanted to put my arms around them, all the people of my life. Those I’d known well and those I wished I’d known better. Those here and now. Those there and then. I wanted to hold them forever in a way that Facebook can’t.

Towards the end of the Pilgrims’ Mass, eight red-robed attendants launched the botafumeiro, a massive silver incense dispenser hung by a sturdy rope that swings an enormous arc across the church transept. At the first oscillation, the organ began to boom as every eye in the cathedral lifted to heaven with the fragrant smoke.

Then I understood. The Way doesn’t end in Santiago. And if we continue on it, loving those who cross our path, we can hope to be united with each other in God’s realm.

Jan Vallone is the author of Pieces of Someday: One Woman’s Search for Meaning in Lawyering Family, Italy, Church, and a Tiny Jewish High School, which won the Reader Views Reviewers’ Choice Award. Her stories have appeared in The Seattle Times, Good Letters, Faith & Values in the Public Square, Catholic Digest, Guideposts Magazine, English Journal, Chicken Soup for the Soul, and Writing it Real. She lives and teaches writing in Seattle.