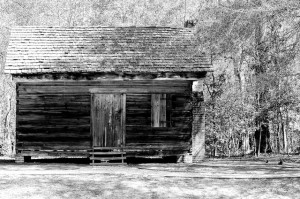 From my office window I can see the pale yellow plantation house, its sharply pitched roof peeking from behind a huge conifer, its two Italianate cupolas, one at either end of the house.

Since 1901, Sweet Briar House has been the home of the president of Sweet Briar College, a small women’s college in the foothills of the Blue Ridge, a bucolic place of towering trees and beautiful architecture, but also a place that was once home to nearly one hundred slaves.

Nearly all traces of this history are gone, except for possibly the most telling trace: a small log slave cabin thirty paces from the president’s home.

For years the cabin was hidden in plain sight, because it served more antebellum uses—chapel, bookstore, coffee shop, and, most recently “Farm Tool Museum” labeled on the campus maps and college website when I joined the English faculty five years ago.

Ever since arriving I have wanted to write about it, but my attempts have come off as sentimental and unearned. It has never felt like my story to tell.

Fast-forward six fall semesters to the arrival of Joseph McGill, founder of the Slave Dwelling Project, whose mission propels him around the country sleeping in slave quarters as a way of raising awareness about the contributions of the enslaved to American history.

I won’t mince words: Joseph’s arrival on campus was a godsend. His presentations, in which he told the stories behind many of the thirty-eight dwellings he has slept in, attracted students who knew little to nothing of the College’s plantation past, as well as lifelong Virginia residents searching for traces of their own kin on local plantations.

But the lectures were just the beginning. The real gift and power of Joseph’s work comes through staying the night in the slave dwelling and inviting others to join him. Finally, I thought, here was a way for me to do something that would acknowledge the slave-holding legacy of this place where I now make my living.

I was the last one to arrive at the cabin, as I had to help get our two kids in bed—one of the stipulations that I had worked out with my wife, Jess. When I walked in, introductions had just begun. There were nine of us, counting Joseph, and we all took a turn saying what brought us.

Joining us that evening was one of my colleagues, Lynn, an archeologist who has devoted her career to the history of enslaved peoples on the campus, an Irish writer from the artist’s colony across the road, a Sweet Briar alum who was one of my first students, a member of Coming to the Table, an organization that promotes reconciliation between the races though educational outreach, the College’s naturalist-in-residence, and, much to everyone’s surprise, a local woman and her partner, whose great-grandparents were the last residents of the cabin.

Lynn passed around a photo of the great-grandparents and their children, and a list naming the extended family. Seeing the photos and hearing what she knew about them changed the feeling inside the small square room, making what we were doing less like commemoration and more like communing.

After we finished introducing ourselves, Toni, of Coming to the Table, lead us in a ritual. She created a shrine of sorts by laying out one of her grandmother’s old blankets and then arranging framed photos of her relatives, some of whom were slaves, in a semi-circle. As a final touch, she added the photo of the cabin’s last inhabitants.

While she constructed the shrine, she carefully explained each step. I could tell that she must have performed this ritual dozens of times for different audiences, most of which were probably highly suspicious. And I have to admit, at first, the high-Mass Catholic in me was, too.

She called us to stand in a circle around the shrine and asked us to join in announcing the names from the list Lynn distributed. She went first, and we watched as she called out a litany of names, dipped her fingers into the bowl and flicked the water to the floor, followed by “aho, ashe, amen”—words of blessing in Native American, African, and Hebrew, respectively.

Here was the kind of the recognition and acknowledgement I had always imagined but could never accomplish on my own.

Then Toni asked us to offer up the names of our departed relatives. She proudly called out the names of the relatives whose photos lay at our feet. This was much harder. Some of us, including me, could barely get through our litanies without pausing for long moments. Voices cracked. Tears were shed.

Charlotte—grandmother, I began. Her name gave me no trouble at all. She is my daughter’s namesake and lived to the ripe age of ninety-three. Harry Henry—grandfather. Still, no problem. Though he died in 1988, I could see him in my mind’s eye. Gerald Constantine-grandfather—again, no problem.

But then came my mother—Lois…I began. She passed less than two years before, and simply uttering her name choked me. This was the biggest surprise in a night full of surprises and revelations.

What I didn’t and couldn’t have fully understood until I joined the circle of remembrance and prayer with people I barely knew, was that the sorrow and pain that erupted when I said my mother’s name was not unique to me. The others around the circle felt it too.

My pain was theirs, and theirs mine.

Joseph McNeil’s Slave Dwelling Project is a work of a mercy. By sequestering himself in these old dwellings for a night and inviting others to join him, he is helping us to confront the paralyzing anger and pain that we feel in the face of suffering.

Dave Griffith is the author of Good War is Hard to Find: The Art of Violence in America. His essays and reviews have appeared in Image, The Normal School, Creative Nonfiction, The LA Review of Books, Killing the Buddha, Offline, and the Paris Review Daily, among others. He lives in Michigan with his wife, the writer Jessica Mesman Griffith, where he directs the creative writing program at Interlochen Center for the Arts. He recently finished a book manuscript titled Pyramid Scheme: Making Art and Being Broke in America.