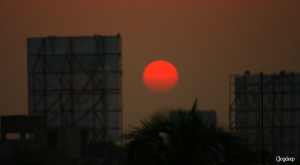 The summer before you died, I hid on the roof in Tollygunge. I walked part of the way home from Sudder Street and by the time I got to the apartment building where I was staying, the sooty red sunset had spent itself. Dusk sifted in the quarter’s dim air, and from the park by the main road a wedding feast’s smoke, incense, and music rose up from beneath a red lit tent. I had lost my keys; I couldn’t get into the little apartment. But I could get into the stairwell, so I went up to the roof.

I thought I was alone above Calcutta.

The trip to this city had been planned quickly. I was offered a task and an adventure, a chance to do new work; I would stay with three young American men in their makeshift office-cum-apartment, which amused me. But you were sick and I didn’t know if I should go.

“When would you come back?” you asked when we talked on the phone.

Then you returned to telling me about the friends I didn’t know, the names and situations I slowly recognized from a TV show you watched religiously in your fog of pain and chemo. I nodded, listened. Your face was like a banner over that hot, strange city that existed, for now, only in my imagination.

On the roof, the dark cast a haze over every dim thing. In the peculiar half-light I could barely see my feet, but I could hear them as I walked around the gritty slab of the roof, following the shallow parapet. The hot breeze brought salt and a rot that stung all of my senses. When it did, I saw a mother and child on a roof below me.

The child’s feet ran with the beat of the wedding song and his hands jabbed the air. The woman sat stiff in a chair, almost invisible. The dark tips of her eyes and mouth shifted, and as I made her out I saw that she was looking at me. She did not move. Neither did I. After a few moments, I sat down and dropped my bag.

The dark was buoyant now; I could see the city around me more clearly. As the color deepened, the child’s steps slowed. My shoulders and head were still visible to the woman, rising over the parapet. For her I took down my sweaty hair, palmed and shook it out, then pulled it back again. I was conscious of her and I was tired, a sick pressure of heat and grief at my stomach, a bit of you that had found me here.

I heard the gate open at the alley and heavy steps on the stairs, a pause at the apartment door and a male American voice mutter, “Shit.”

“She isn’t here?” Another said.

Footsteps went down the stairs again and hands clanged through the gate. From the roof I heard the young men run down the alley and split at the turn, the sound of their shouts melting into the chants of the wedding music. One set of footsteps came up the stairs slowly, keys jangling in time.

I looked once more over at the woman and then I lay down on the roof. When I did, I heard her speak. The child chattered; she quieted him. In an apartment below us, the voice of a television tuned up and shot through all the windows, reaching up to us from three sides of the building. I thought of you and your bright mind, dim and sick, pulling back to a kind of childhood that broke your mother’s heart.

I heard her chair scrape, her voice call. The child’s feet scurried for the stairs and the footsteps coming for me smacked closer to the roof. I stood up quickly to see her a final time, to see if I could make out her face clearly in the darkness where I could now see bats and birds falling delicately in the blue sky. When I got to my feet, she was gone.