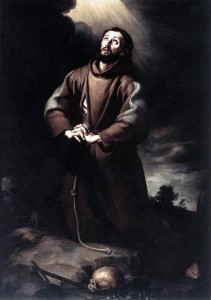 During a windstorm, our wooden statue of St. Francis is knocked over. I lean him back onto the uneven garden patch beside the porch but the next morning, as I am ushering my children out the door for school, I hear my daughter cry, “Oh no, St. Francis has fallen!”

I get them in the car, and even though we are close to being late, I run back to the door to pick him up and set him aright. Something deeper than sentimentality makes me cry out when I see that his wooden arm is split. Inside, a rod connects his forearm to his elbow. I try to shove it back together but there is no time before I have to go.

My love of Saints started with this garden statue.

I almost missed it while we were cleaning out my grandmother’s house, taking what we could, hoping some of it was useful and could be passed down to our children. I walked by the patio doors and glanced out the glass pane and saw the wooden back of St. Francis.

The body of the Saint is carved out of one log, and the arms and small details could be scraps from another; it’s a non-descript figure, one that neglects the details of his face, his bald pate, the folds of his garments, in favor of the simplicity for which St Francis himself lived and died: more stick figure than illustration, more idea than image.

When I saw him, cobwebs were draped between the birds on his outstretched arms, dust and outdoor particles were lodged so deep in the wood grains that they would never scrub off, a strand of rope was tied at his waist, and his eyes (two simple slashes in the wood) were closed in peace; I loved him.

When he showed up at our house and my husband loved him too, I felt the thrill of a shared faith. There was something about this Saint. And despite that the fact that he has captured the imagination and fervor of millions before us, as well as supplied the name of a religious order of monks and a pope, he is our Saint.

Growing up in a low church, I was told we were all saints. It wasn’t until my daughter started kindergarten at a Catholic school and was sent home with coloring pages about St. Therese, St. Francis, and St. Patrick that I began to understand the appeal of Saints with a capital S.

The stories of the Saints are mythical, and I don’t mean in the common understanding of myth (a fantastical story that is untrue). No, these are myths that feed our imaginations, that capture shared meaning and recognition, that paint deep living images of the truest things, the things we know in our hearts, minds, bodies, and spirits. I am learning that this is what Saints are: representations of our shared faith, who belong to every individual who claims them.

St. Francis has become real to me because he points away from himself. His hands, upturned, are open to the Christ he follows. His joy for life and his turning from wealth, welcome me toward the life he led. In his book “The Lessons of St. Francis,” John Michael Talbot says that St. Francis appeals to so many people because he is himself so real. He was “radical…loving…passionate…gives us hope.”

But St. Francis is defying my expectations. He invites me into a life that, from the outside, looks idealistic: love of nature, simplicity, and kindness. But when I draw nearer into the way of Francis and, ultimately, the way of Jesus, I am confronted with my own inability to move and change, like a physical force that curves me back in on myself.

A friend from grad school named Matt Jenson who teaches at Biola University wouldn’t be surprised at this feeling. He did his whole thesis on the metaphor, taken from Martin Luther, of the sinner being “curved in on himself.” Matt called this tendency to isolate ourselves “sinful scoliosis” but he notes that saints (with a little s, but I’m taking the liberty to include Saints too) are “drawn outward by the Spirit in union with Christ.”

St. Francis still stands in the same spot, a little bit broken, among the pots of rosemary, pink fairy vines, and fallen leaves. It’s not worthy of him. But I don’t think he would mind. He reaches out with wooden hands that have no divided fingers. He welcomes us. He welcomes our guests. He calls to the flesh and blood birds that will surely shit on him.

Even though, in my spiritual scoliosis, I am a bit wary of his openness, I still keep him there at my front door. I suspect that walking alongside St. Francis will push me closer to the Christ that he saw in a vision, a vision that left him with the stigmata wounds that would fester until his death. I am afraid though, fighting against my tendency to curve inward. I am afraid because I suspect that any encounter I have will probably leave me scarred for life too.

Christiana N. Peterson grew up in Texas and received a PhD in Creative Writing from St. Andrews University in Scotland. She has published poetry at Catapult, Curator, and Literary Mama as well as articles on fairytales and farm life at Art House America, her.meneutics, and cordella. She lives with her family in rural Illinois in an intentional community where she is learning the joys and challenges of church and farm life. You can find more of Christiana’s work on her blog thebeautyofthishour.wordpress.com and follow her on twitter.