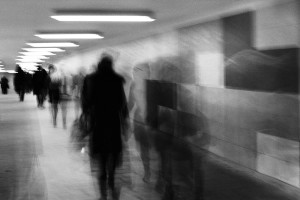 When I first met Daniel Bowman Jr. at the Festival of Faith and Writing, we both experienced that you’re-not-how-I-pictured-you-from-Facebook moment. While he may not have felt self-consciously compact, I became quite aware of my own awkward, lumbering stature that banged into a book table or two. Still, I tried to make a good impression while obsessing over the fact that I wasn’t wearing earrings twenty minutes before my appointment to read a poem at the chapel.

“I’ll feel naked up there without earrings,” I told him. “Wanna come with me to the campus store to find some?”

Nice to meet you. I’m neurotic and say inappropriate things.

Dan, on the other hand, was fighting a whole ninja army of thoughts: What do I say to de-escalate the anxiety rising up from standing in the middle of a conference with hundreds of people? How can I be endearing and likeable? If I’m witty will she want to get to know me better?

We not only survived the encounter, but over the next couple of years, grew in our friendship. We shared our writing, spent time with mutual friends at retreats and conferences, and even set up a co-reading at a local coffee shop in my area. Meanwhile, I began to observe some quirky patterns in Dan’s behavior—nothing too worrisome, since we are, after all, poets. But he often avoided eye contact or had trouble transitioning to hellos and goodbyes. Sometimes he became agitated during unpredictable social situations.

Eventually, at the age of thirty-seven, he was diagnosed with Autism Spectrum Disorder. ASD, now a term in the Diagnostic and Statistical Manual of Mental Disorders that replaces the distinction between autism and Asperger’s with one umbrella term, applies to a sprawling well, spectrum, of people who experience impaired communication and social interaction.

As Dan has noted in his poems and essays about navigating ASD as a newly diagnosed adult, many people don’t understand the breadth of ASD. They associate autism with autism activist Mary Temple Grandin alone or, worse, Rain Man, and picture robots lacking emotion while possessing an amazing ability to do mathematical “parlor tricks” on the spot.

“Drop a box of toothpicks on the floor” Dan said, “and I’ll be lucky if I can count past twenty.” A writer and English professor, Dan doesn’t fit the math-science savant stereotype. And quite unlike Rain Man, he exudes affection and emotion while helping his friends and students navigate complicated literary and interpersonal challenges.

But these interactions take their toll: “It’s a rich and complex emotional experience,” Dan writes, “and that’s really at the heart of autism: there’s no such thing as a simple interaction. Interaction does not come naturally/intuitively, so we power through it with intellect and that leaves us on edge and mentally exhausted.”

Dan has found much solace, though, in the book Writers on the Spectrum, by Julie Brown, which details ASD’s manifestation in the lives of writers such as Thoreau, Melville, Dickinson, and Yeats. “If you really want to understand me and what I’m going through,” he said one morning as we sat on a deck looking out at Lake Michigan, “read that book.”

So I entered my friend’s world to read about these rich, complex lives. Autism can look like Hans Christian Anderson exploring isolation through the emotional safety of fairy tales, or Emily Dickinson seeking to mend a “Cleaving in [her] Mind” with her acute sensory language, or Lewis Carroll delighting in his “playground of the mind” within a disjointed, unpredictable Wonderland.

As I read, I began to think about people from my past who may fall on the spectrum, people I often ignored or scorned. Maybe that girl from my education class years ago. Maybe that guy from church. Maybe the piano teacher. Maybe my father.

The Carroll chapter, through the discussion of the Duchess, brings up Professor Michael Fitzgerald’s concept of “autistic aggression,” a “compulsion toward manipulating and dominating others aggressively” that can arise from the frustration of not being able to function easily in a world of neurotypicals.

My father has always seemed a bit…off in his ability to interact with others. He has trouble sustaining friendships and flies off the handle when things don’t go as planned, like when he missed a turn on the freeway and experienced a terrifying meltdown behind the wheel. Where do those struggles come from? Could he have carried ASD with him his whole life, a son of immigrants born in Wheeling, West Virginia, in the 1930s, a time when schools didn’t accommodate, let alone recognize or screen for, social and behavioral challenges?

He had a difficult childhood, I suspect. As a result, so did I. And that matters.

All lives matter. Of course. Jesus said it himself. But part of understanding that all lives matter is taking the time to understand individual lives and experiences. When #alllivesmatter began to replace #blacklivesmatter, the effect, at least to me, wasn’t an expanding spirit of inclusiveness. Rather, the sentiment seemed to dismiss the black experience.

All lives matter can just as easily read no lives matter. It’s emotionally and intellectually lazy. I know because I constantly avert my gaze from the individual stories of immigrants and veterans and transgendered youth, the ones I’m too busy to try to understand. All lives? Sounds good to me. Now we can move on.

I’m not going to pretend that reading a book and visiting a few websites has turned me into an ASD expert or advocate. But I’ve dipped my toe in the river. Dan has said that one of the constants in the autistic life is alienation: “For one very close friend to decide to learn about it, to hear me tell my story, and offer support—that’s invaluable. It’s a potentially life-changing gesture toward relationship and community.”

When you expand the perspectives from which you view the world, you expand your heart. And it hurts. As C.S. Lewis famously writes in The Four Loves, “To love at all is to be vulnerable. Love anything and your heart will be wrung and possibly broken.” The more I try to understand just a few minutes in Dan’s life, the longer the hairline fracture in my heart. And I can barely begin to think about my father. But I will. I know I will. I’m ready to be cracked and wrung.