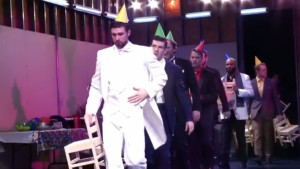 The Glory of the World—now running at the Brooklyn Academy of Music—is about Thomas Merton in the same way The Big Lebowski is about the Gulf War—almost inscrutably. Few plays about pacifist monks need a fight choreographer, a giant rhinoceros, a sprinkler, a ukelele, two air mattresses, and a remote-control helicopter.

The original story sounds almost as wackadoodle as the play, which took shape at the Actor’s Theatre of Louisville, Kentucky, home to the Humana Festival of New American Plays and near the Abbey of Gethsemani, where Merton lived.

On his way to work every morning, director Les Waters walked past a plaque that reads “On this site, Thomas Merton had a spiritual revelation.” And he got curious. He contacted the playwright Charles Mee about collaborating on a project to celebrate Merton’s one-hundredth birthday in 2015.

The result was The Glory of the World, which features a cast of seventeen men in a warehouse-like space who are holding a centennary celebration for the monk, who never appears on stage. They are men of all sorts, each toasting what they consider Merton’s “fundamental” quality: his Catholicism, his Buddhism, his pacificism, his communism, his contemplative life, his books, his scandals.

The production made its way to Brooklyn when it was spotted at the Humana Festival by former Episcopal monk Roy Cockrum, who won the $259 million Powerball in 2014 and has devoted the money to producing theatre.

The men arrive on stage through a rolling garage door, bearing Solo cups and a giant gift-wrapped box. The party makes its way through a surreal sequence of set pieces: Two men make out for minutes during a dance-like scene, while the rest mirror their movements in the background.

At one point, two of the men lay down plastic sheeting and strip down to Speedos, turn on a sprinkler, and pantomime swimming, sliding from one side of the stage to the other. A group of younger men strip down to T-shirts and tank tops and strut around to music flexing their biceps. The men sit on tiny chairs in a semicircle, eating cake, wearing tiny birthday hats, and describing various religions and other isms in terms of human excrement, like a bunch of playful frat boys majoring in philosophy.

The play culminates in an exceptionally long fight scene that begins as a serious quarrel and ends in a comic, joyous hand-to-hand battle with swords and chainsaws and a man stripped down to his birthday suit and clanging metal bowls—until they’re interrupted by the arrival of the pizza boy.

What all this has to do with Merton, besides the constant toasting and name checking, is much more embedded in the play’s staging than anything like a plot. It recalls quite strongly the medieval Feast of Fools—a scandalous, almost blasphemous festival designed to turn the world upside down for a while.

Apparently celebrated with little official approval and yet linked to church feast days, the Feast of Fools was a time for revelry, excess, drunkenness, and a brief social revolution presided over by figures such as the Boy Bishop or the Lord of Misrule. Depending on whom you read, the Feast was celebrated by clergy, or derived from various pagan festivals, or linked to social revolution, or all or none of the above.

That sort of muddled, multi-faced origin is exactly right for The Glory of the World, a party and a paean to a man who embodied contradiction, who turned his world upside. A monk with an illegitimate son. A devout Catholic contemplative who late in his life took off for Bangkok. A Trappist and a social activist.  And a writer devoted to love and life who died of accidental electrocution.

You get the distinct sense during the play that Merton would have enjoyed all this arguing over his legacy—that the Rorschach test of his life may also hold the key to learning to love one another across our isms and barriers.

Yet for the contemporary audience-goer—especially in New York, where the experimental theatre-goer can see most anything any night of the week—all this revelry and contradiction may come quite naturally. Much theatre exists to force us into face-to-face contact with things that challenge the “natural” order of things.

But the play still manages to be shocking, even to an audience adjusted to misrule.

Before the party arrives, a single man—barefoot and clad in a black T-shirt and pants—comes out onto the stage and sits at a table, back to the audience. A sentence appears on the walls above him, readable to the audience, appearing and disappearing one letter at a time, while everyone sits in complete silence.

Reading descriptions of banal, everyday sounds, the audience becomes aware of the sounds of the room—people coughing and shifting in their seats, unsure of what’s happening.

The actor eventually walks away, but at the end of the play, he returns and faces us, slowly looking around the audience and sometimes closing his eyes, while the words return. They are haunting, especially as he’s on a stage surrounded by the leftover destruction wrought by the party.

At one point, the words appear: “Is nothing sacred?”

And in the next moment: “Is everything sacred?”

We are sitting in the dark, having laughed and winced, hearing our own breathing, when that question is put to us in the silence. The night I was there, two beats after the second question appeared, someone in the audience shouted, “Yes!”

The Glory of the World runs at the Brooklyn Academy of Music through February 6, 2016.