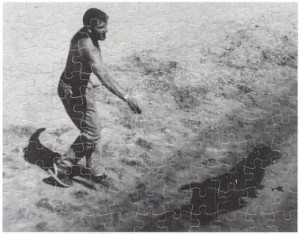 My daughters Lydia and Becca, ages 12 and 10, are thoroughly delighted by the contemporary art collection at the Milwaukee Art Museum. They hurry to the Warhol soup cans and Lichtenstein comics they recognize from art class, a large sculpture made entirely of clear plastic buttons, and plenty of outrageously “simple” pieces they insist they can paint themselves and henceforth make millions of dollars.

During our last visit this December, however, we encountered a work we’d never seen. On the floor sat a large stack of sheets approximately two by three feet in size. Terrified that my kids would touch the art, I half-dove in front of them as a bodyguard of sorts. Then a ponytailed security woman stepped over.

“You may take one if you like,” she said.

Still only partly believing her, my girls and I each lifted a sheet printed with gray scale light seeping through clouds and a small silhouette of a flying bird.

The security guard explained that the artist, Felix Gonzales-Torres, made the untitled piece as a tribute to his partner, Ross Laycock, who died from complications from AIDS in 1991. “It was his way of grieving,” she said, “giving others a chance to carry a piece of Ross’s memory with them.”

I noticed that the artist himself died in 1997. But the stack of sheets continues to be replenished almost two decades later, sending the memory of both men into a limitless future.

The sacredness of the moment stilled me. How did I deserve my own share of love and loss between two people I never knew? And my daughters—would they understand the difference between this work of beauty and other “free stuff,” like Frisbees tossed to them from parade floats and sample bites of frozen pizza at Costco?

We rolled the sheets slowly, gently patting the ends to keep them neat and even, and entered the next gallery. Without rubber bands, we had to hold the papers securely without wrinkling them, allowing the birds to soar peacefully until we got them safely home.

That lasted about five minutes.

As soon as one daughter had to go to the bathroom, so did the other, and I was left juggling three clumsy rolls as I waited outside. When the girls came out, it was unclear which sheet belonged to which girl, and, of course, neither wanted to claim the one already starting to rip at the edges. Then we had to leave the—shall I dare repeat the word that came to our lips—posters on a bench while entering an enclosed installation piece, and I accidentally smashed one with my purse.

The tribute to Ross was gripped in sweaty hands through several centuries of pottery and textiles, knocked on the floor in the lobby cafe, and, eventually, after we trudged back out to the minivan in the underground parking lot, tossed in the back with the laundry detergent I hadn’t taken in from the weekend’s shopping trip.

And the utter depths of our pathetic-ness, which, I’m assuming by now, will surprise no one? When we piled out of the van, distracted by our hats and gloves and excited dogs clawing at the back door, we forgot to bring the art inside.

The wrinkled sheets languished in the car for weeks. I’d see them next to the groceries but tell myself “next time,” since they were so awkward to carry. I’d remember the dark, lonely bird at odd times, like while standing in the shower waiting for the conditioner to work, and feel a stab of guilt, as if I had somehow left a person to freeze to death in the garage. And then I would forget again.

Last weekend, Becca was assigned the chore of cleaning out and vacuuming the car. When I saw the pile of overdue books and stray socks she’d gathered from the backseat, I remembered.

“Did you find those sheets from the museum?”

“Yeah. I threw mine away. I didn’t know where to put it. Lydia grabbed hers.”

“Did you find mine?”

I couldn’t blame Becca, really. She has a room full of stuffed animals and Harry Potter posters. At ten years old, she possesses no understanding yet—thank God—of suffering and loss. And where does one put grief, anyway? What was Gonzalez-Torres envisioning as he printed these reams of sheets, including several other stacks of images in museums across the country?

These days, as I undergo therapy for earlier traumas and process the past through writing, I find little room to hang all the memories among my daily to-do files. I get a flash of my fourth-grade classroom—the desks in two L formations, the young teacher who looked like Olivia Newton-John—then remember I have to reschedule my daughter’s missed orthodontist appointment.

The face of a deceased friend pops up, and I want to stay there for a moment, take in his smile and voice. But the phone rings, or the dog whimpers to be left out, and I’m back to living in the tyrannical moment. How do I hold on to the memory of important people and events, let alone those of a stranger-artist almost twenty years gone?

Where do we put it all?

Because I’m writing this piece, I went to Lydia’s room this morning and rummaged among dirty clothes and dishes until I found the paper under her bed. I had to army-crawl to get it, most likely because the Roomba had shoved it toward the wall.

I unrolled it, or, rather, unbent it. The sheet was now closer to accordion-folded, webbed with creases. But I smoothed the paper out the best I could on her unmade bed and stepped back.

The bird—is it a tern?—doesn’t fly near the corner of the paper, as I remembered it, but closer to the center. And it’s not a solid black silhouette but a dark gray with lighter shades on the wings, as if the feathers are catching the last bits of sun.

I said a prayer for Felix. For Ross. Or, rather, for the ones they left behind 19 and 25 years ago. I looked at the collection of granola bar wrappers on my daughter’s floor—the sight of which usually drives me to a mild rage. And I breathed a prayer of thanks. Those wrappers will be gone soon enough when my daughter leaves for college in a handful of years.

It was a rushed, sure, even forced minute or two of devotion. But it was devotion nonetheless, a holding of memory up to the light.

Maybe Felix would be okay with this. Perhaps, even, it’s just what he wanted.