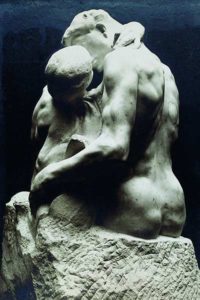 My thirteen-year-old son had seen the Viagra commercials for years, but never understood what they meant, until finally, he asked what Viagra is and does, and I told him. Now he has this new vocabulary that includes the phrase “erectile dysfunction,” and another galaxy of humorous opportunities has opened to him.

He begins to explore the ever-present sexual subtext that exists just beyond child-consciousness. Dear Lord, the sex is everywhere. How many people are having it, this very minute? How many conversations, looks, and touches are about it, even when the word is never mentioned?

Fortunately, he still has much to learn and a lifetime to learn it—or not—which is also maybe an option. There’s a fair chance he won’t pick up on certain realms of sexual metaphor unless someone points them out to him. I don’t know if beyond a certain age, such would be a privation or a precious innocence.

For my own part, sex is the non-sensual monument at the center of nearly everything I do and think and feel and pray. It was the last frontier between childhood and adult life, the primary benchmark between innocence and sin, the portal to motherhood and the ongoing cyclical shadow over my bodily liberty.

Sexuality is still a bit of a bog I wade through regarding every new acquaintance or friendship. And sexual temptations are probably the chief source of any humility I possess, the primary impetus for throwing myself on the mercy of God.

And then there is the flesh and blood doing of it—which, what can I say? It makes the cut. But it does require boundaries, especially since we’re Catholic, and we already have six kids, and you can deduce the rest.

He conceded that such programs might help reduce teen pregnancies by diverting adolescent sexual energy away from coitus, but noted, “The disappearance of prejudice—which is doubtless liberating—must not mean the abolition of the rituals, mysteries, forms, and discretion through which sex became civilized and human.”

He suggests that eroticism relies on acknowledgement of the parameters supplied by religion and politics that keep sex discrete and mysterious, while privately, in good mutual or communal accord, transgressing them, which allows lovers to be, for a time and within artful context, like gods.

Llosa posits the only parties who would benefit from “eroticism’s final death:” “Not the libertarians and the libertines, but the puritans and the churches.”

Here, I disagree. The church, or at least the Catholic Church, doesn’t want sex to be powerless. Practitioners of faith are fast becoming the quiet keepers of Eros, the life instinct, as we preserve also the boundaries supplied by faith and nature. Boundaries can’t remain in a purely functional way, or in the absence of a real God, real consequences, or a body of believers who consider such things meaningful.

Civilization has already minimized the reproductive limitations and consequences of sex. Stripped of its creative energy, sterilized, and protected from possibilities of childbirth and disease, Eros is divorced from Thanatos, the death instinct, and becomes…less interesting.

Jesus help me, what’s put me off on contraception is my association of sterile sex with Enya on the iPod and scented candles, sex festooned in piquant costumes and scenarios. Perhaps this is where sex becomes an expression of culture or art, but without any real skin on the line, it’s a set piece with no transcendent effect.

Chesterton wrote in Orthodoxy that “Catholic doctrine and discipline may be walls; but they are the walls of a playground.” So, too, for marriage. The bonds of fidelity and lifelong partnership, though limiting, provide a harbor in which to experience the glorious freedom of the children of God.

For me, a person of faith, it doesn’t work to think of Jesus as my chaste boyfriend, a placeholder to keep me pure and loyal when I can’t have sex. Purity culture has much in common with masturbatory sex-ed programs.

My heart and soul demand consummation. I was made for it. Courtship must end, which is a deadly prospect and a liberating one.

God expresses both Eros and agape, both the desire to recreate another in one’s own image, and the purified love of self-sacrifice. He allows us to partake of both through relationship with the Holy Spirit, just as Mary, impregnated by the Holy Spirit with the life of the world, is initiated into great suffering, while simultaneously freed from death.

Communion with the Holy Spirit is the most powerful catalyst in the story of my life, and it is at least as sexual as actual sex. Not only is feminine climax a meditative art, meditation is itself a going inward to find the love union, whilst being acted upon externally—in this case, by the Holy Spirit, who is other, but with our fiat, becomes a part of us.

My husband, made potent by the Holy Spirit, must be Christ in the flesh to me. Does he deserve to be treated so? No. Neither do I. It doesn’t matter. This is how we surpass the boundaries of our flesh and become like gods. He must be my Christ. We must consummate the mystical union. And sometimes I’ll go easy. Make a sacrifice of myself. Sometimes he will ravish me, and we’ll have enormous pleasure.

And sometimes, of course, sex is just sex; its metaphorical and spiritual significance passes right over my head.