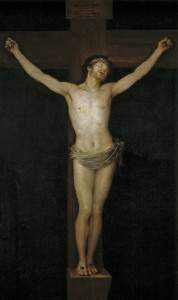 The old age was, at least in the West, the mostly European Christian civilization that lasted more or less from Constantine to Darwin. That thing is dead. We live amongst its fragments and tatters, which is hardly news to anyone roaming this earth in the early decades of the twenty-first century.

One of the interesting things about living in a “between age” is that you have two essential choices on any given day. You can spend your time looking forward to what will come. Or, you can spend the day sifting around in the ruins of what was.

To my mind, some of the most interesting and provocative literature produced in the twentieth century was created in the mood of the latter choice. It is a literature you would not call religious. But you’d be hard pressed to call it completely secular, either.

Let me give you an example.

Jorge Luis Borges wrote a short story in 1970. He gave it the title “The Gospel According to Mark.” The story takes place in the countryside of Argentina in the year 1928.

The central character in the story is a young man named Baltasar Espinosa. Borges wrote, “We may describe him, for now, as one of the common run of young men from Buenos Aires, with nothing more noteworthy about him than an almost unlimited kindness and a capacity for public speaking that had earned him several prizes at the English school in Ramos Mejía.”

The young man has something of a split consciousness, endemic to the age. His father instructs him in “freethinking.” His mother teaches him the Lord’s Prayer.

One summer, Espinosa is invited by a cousin to spend a few months at a ranch in the provinces. He lives with a family by the name of Gutres: a couple and their daughter. The Gutres are provincial folk in every sense of the term, good and bad.

Espinosa finds an old Bible lying around the Gutres ranch. He decides it might be interesting to read passages from the Bible aloud after dinner. The Gutres have no literature in their lives and not much formal religion.

The family is transfixed by the young man’s readings. They look forward all day to the stories from Mark’s Gospel. During the day, Espinosa does work around the ranch and the family becomes quite dependent upon him.

They begin, almost, to worship him. They want him to read from Mark’s Gospel again and again. They start to ask him many questions, especially about the Crucifixion and how it brought about the salvation of mankind.

One day after heavy rains, the members of the Gutres family bend their knees and ask Espinosa to bless them. Then, “they mocked at him, spat at him, and shoved him toward the back part of the house.” That’s where they crucify the young man.

This story is heavy with a biting irony. The Gutres family has completely misunderstood Espinosa’s nighttime reading. They don’t see Mark’s Gospel as a narrative from which we can extract moral principles. They see it as a guidebook.

Since the members of the Gutres family love and revere the young man Baltasar Espinosa, they decide that they must crucify him. In essence, they are merely following his instructions. He showed them, by reading Mark’s Gospel, what to do.

This particular tragedy occurs because of the disjunctions peculiar to Modernity: The young man caught between the freethinking of his father and the piety of his mother; the family out in the provinces that has lost touch with the grounding stories of their own civilization; the misunderstandings and incongruities that crop up when shared context has been lost.

Borges’ story is a brilliant and startling and troubling thought experiment about the sorts of things that can happen when a civilization breaks into fragments. The survivors muck about in the broken pieces, putting them together in odd and unexpected ways. Sometimes, terrible ways.

But there is an even more unnerving way to read Borges’ story. On this reading, the Gutres do exactly what they are supposed to do. Espinosa is, in fact, a kind of Christ figure. Remember that he was described in the beginning of the story as being possessed of an almost “unlimited kindness.”

Borges downplays that description by prefacing it with the comment that Espinosa has “nothing more noteworthy about him” than this kindness. But to have “unlimited kindness” is, in fact, to be extraordinarily noteworthy. According to the Gospel, trying to live in unlimited kindness means to live under the burdens, sacrifices, and joys of the Cross.

Whether you are Jesus Christ or Baltasar Espinosa, the result of living in unlimited kindness is to be misunderstood by the world and then finally destroyed by it.

In a sense, then, Borges’ odd and discomfiting story takes Mark’s Gospel more seriously than millions of sermons delivered in its name. So many of those sermons kill the story of the Gospel, smoothing the shocks and bumps into platitudes that have long ago lost their vitality. Borges’ story, by contrast, electrifies the narrative.

So, in a sense, our fragmented tatter of a civilization provides just as many opportunities to renew sacred literature as any other age. The opportunity for creating sacred literature today is in the fragments, in the broken parts, in the impossible disjunctions. It means walking down a ruined and rubble-filled path the end of which, as Charles Taylor notes, “No one can foresee.”