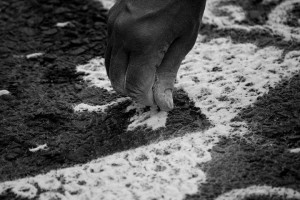 This one’s for Carin Ruff, and by way of answering my niece Kate’s question.

A little more than twenty years ago, I spent a summer traveling around India under the auspices of the Fulbright-Hays program, a summer fellowship grant program for teachers. Over the course of about six weeks, we traveled to some twelve cities, from the very feet of the Himalayas to the Bay of Bengal.

India seems far nearer now than it was then; when our group visited, the country was in the final days of an old-style Socialist economy, and it was before the boom in the country’s tech sector—which had already started—had achieved a generalized reputation abroad.

It was before India became the home of the world’s customer service call centers, and before the ubiquity of the “mobile phone” revolution: I recall a hot afternoon in Chennai (which was then still called Madras) when I had to walk three blocks to a telephone office and pay in cash to wait for an operator to connect me to an international trunk line.

Hinduism was the gateway to the notion of mystical Christianity for me—but, more than the grandeur of the Shore Temple of Mahabalipuram, what sticks out in my memory are the kolam designs in front of the houses of the peasant women living nearby: Every morning before dawn, these women use rice flour or chalk dust to trace elaborate, interlocking, sometimes multicolored designs in their thresholds and courtyards.

Kolam designs are gestures of hospitality and welcome, and according to Wikipedia, are believed to bring good luck via the goddess Laxshmi. Every single day, the combination of foot traffic and rain scatters them away. So every morning, they must be drawn anew—and not just any way, either, but according to the conventions of “interlocking lines and dots” (again, Wikipedia) that govern kolam creation.

It’s that commitment to beautiful uselessness that struck me—we all know mandalas, of course, constructed by what we think of as grave and silent Buddhist monks—but here is the same gesture embedded, daily, in the quotidian mysteries of home and the workaday world. Rather than a gesture of refusal, this one is an embrace.

It is a gesture that is not instrumental, or transactional in nature—although I suppose on some level, petitioning the divine could count as such. But it is certainly not one that is guaranteed. The accounting calculus is elsewhere.

How much of what we do is transactional, it seems—even we “grace alone” folks who do not esteem Jamesian work-efforts: We go to the funeral because we knew the person who died, but also because we want to be seen by the relatives of the person, and ultimately, because we want people to come to our funeral, too.

But what of the gestures that secure nothing for us? I would like to share an example.

A couple of years ago, a young couple at my church and I decided to make a hospital visit to an infirm parishioner who lived in a down-at-the-heels suburb that was far from the church, but closer to where we lived than anyone else in the parish. Neither of us really knew this older man, who had lived for decades alone in this place, without wife or children, and who had come faithfully across town for the Divine Liturgy at the parish, where he had been one of the founders.

He had spent a lifetime working in construction, if I have this correctly, and his family were all back in the Midwest. And now he was apparently dying alone, at Southern Maryland Hospital Center.

The young couple picked me up at my house on a May weeknight just as a giant line of gray thunderclouds crossed over the Capital Beltway and dumped a thunder of drops on the windshield. They had been married barely a year, and they giggled and held hands intermittently as we moved, inchworm-like, through the evening rush hour traffic, as I sat in the backseat wondering what the hell I was doing—a working mother, on a weeknight, driving an hour or more.

Then when we got to the hospital, we found that there was still an hour before the Intensive Care Unit had visiting hours.

No matter—the young couple was game for anything, and we didn’t even think about leaving, but settled in to wait. What for?, I found myself wondering, as we ventured into the basement of a hospital so relatively impoverished that it did not even have much of a cafeteria still open at night beyond a couple of vending machines and Formica tables in a break room.

We talked. I love this couple. But still the hour passed oh so slowly, and I thought of everything else I could be doing—things for my children or husband, the laundry, other forms of self-development and productivity. At last the hour was up and they let us into the locked ward of the ICU.

The man was in his room, his skin olive against the whiteness of the sheets, his mouth open, and his breathing heavy, loud, and labored, rasping. He was in a medically induced coma, the nurse said to us.

The young husband and wife and I all glanced at each other. Then we prayed, nothing spontaneous or timely, but the Trisagion cycle of prayers most foundational to our tradition. We sang the Paschal Hymn—Christ is risen from the dead, trampling down Death by Death—and then we ended, glanced at each other once again, and left, to the sunset and the renewed rain.

This may appear to have been a useless gesture, but to me it feels like the most important thing I did in 2014.

But that’s the thing: These acts are like kolam. And they are meant to be done every day.