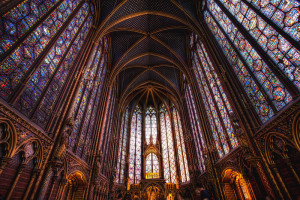 This summer in Paris, on the morning before we flew home, I took my husband to Sainte-Chapelle, the medieval Gothic chapel on the Île de la Cité, right in the heart of Paris, a few streets over from the Notre Dame.

A friend had brought me to Sainte-Chappelle years before. In the few free hours we had following a conference, it was the only thing I saw in the city on that trip. I climbed the stairs from the lower chapel wearily, still jetlagged. But though half the famous windows were covered for construction, the light exploded across my field of vision with a shock I can still feel in my bones when I remember it.

Fifteen stained glass windows from the thirteenth century ring the room, stretching almost from floor to ceiling—not set into the walls so much as forming them. You can taste the rose light, feel it press your skin. It is glossy, thick with history and memory and the breath of millions of visitors.

With my husband in tow on the last day of our trip, I padded up those stairs again, this time wide awake and ready for the light. In the years since I’d been there, the covered half of the room had been restored and the scaffolding removed, revealing the other half. Now I could see all fifteen windows, and I stood in the middle of the room, transfixed.

Fiat lux. Let there be light: The organizing principle of the Gothic cathedral, nowhere more evident than Sainte-Chapelle.

The world is larger inside that cathedral, and I am lit from every side with every color. Creation is reborn, warmed with the light that seems close to the first sunrise. Every sunrise and glowing wintry pink sunset brings me back to that room.

Our winter in New York City has been mostly dry and cold, and so we’ve seen our share of pink sunsets. After one of those a few weeks ago, my husband brought me to the Gagosian Gallery in Chelsea to see the latest collection of photographs from acclaimed artist Gregory Crewdson, who creates staged scenes with figures and a sense of the uncanny.

The exhibit is called Cathedral of the Pines, for a trail in Becket, Massachusetts, on which Crewdson actually shot some of the images in 2013 and 2014. There are thirty-one images, nearly evenly split between indoor and outdoor scenes. They are shot and developed in a way that self-consciously evokes paintings more than photographs, with figures and colors that feel fixed upon the canvas as if laid there carefully with a brush.

In all of them, human figures appear that recall Edward Hopper’s lonely, empty-eyed subjects—along with houses and structures that also recall Hopper, all located in towering forests or near bridges. We’ve caught these figures in a moment in their story that’s so ambiguous we’re not sure what’s going on. Many are in states of undress. And even when they’re in a room together, they are alone.

“It was deep in the forests of Becket, Massachusetts, that I finally felt darkness lift, experienced a reconnection with my artistic process, and moved into a period of renewal and intense creative productivity,” Crewdson writes about creating the series.

Cathedral of the Pines. With Sainte-Chappelle still humming in my mind, the exhibit’s name and images turned me on to the possibilities of light and space—and it’s hard to imagine that they weren’t somewhere in the artist’s mind.

In the interior shots, the lonely figures are placed in domestic spaces with banal and sometimes ugly fixtures, wood-paneled walls with holes cut in them, worn carpets, mismatched furniture. They don’t look happy—they’ve been caught in moments of melancholy reflection, realization, or despair, but with expressions so muted that we fill in the blanks.

Slowly, though, we begin to see that there is something missing in the images. In several, footprints in the snow spotted outside the house lead away. In “Father and Son,” a man lies in bed, and we can see a son reflected in the mirror on the wall, but only in the mirror: Is he there at all?

Sometimes what’s missing is less obvious—a fishing rod, a heavy piece of furniture that left a dent in the shag carpet. In a number of the photographs both indoors and outdoors, people stand nude, often with their clothing piled visibly in the image. What happened here? What or who led them to a state of exposure? It’s not so much Adam and Eve in a state of nature as figures obviously and intentionally disrobed, as if trying to get closer to something in the air.

What hangs about all the figures is a light that doesn’t match the environment. This is especially clear in the interior images, where women and men stand at sinks and sit at tables and sink into easy chairs, smoking, with the lightest hint of a halo, as if the glow is coming from somewhere else, contrasting sharply with their expressions of weariness.

It’s hard not to think of religious iconography, faces lit from within and serious with holiness. But these are lit from beyond—from, presumably, the pines; even in the indoor scenes, small pictures on the walls of the home depict the trees and mountains outside, tiny ironic reflections of the grandeur visible just outside of the windows.

That Crewdson “felt darkness lift” in these forests isn’t obvious from the images—if anything, you can feel the darkness descending on these lonely subjects.

But the light around them recalls the cathedrals—which are, after all, altars at which worshippers remember an absent person they expect to return. The light all around the worshipper in the cathedral, the figure in the midst of the pines, and even the gawking tourist in Sainte-Chapelle—each is a palpable attempt to evoke the warmth of a divine presence, a reality to hope for, a desperate and grasping belief in an end where all will be set right.