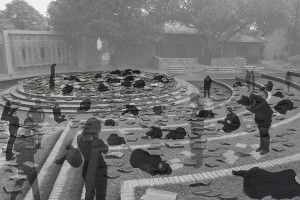 In my role as the curator of three literary guides to prayer for Paraclete Press (At the Still Point, Light Upon Light, and the newly-released Between Midnight and Dawn), I have the coolest job. Not only do I get to read piles of poetry and fiction from across the centuries, but also I interact with dozens of living poets and novelists in various stages of their careers.

Some are so well established (e.g., Chimamanda Ngozi Adichie, John Irving, Li-Young Lee, Katherine Paterson) that I communicate mainly with their publishers, while others I pretend to have “discovered” (e.g., Katherine James and her as-yet-unpublished novel Can You See Anything Now—yes, you can say you “knew her when”).

But then there are those who receive public acclaim on a whole different level, whose place in the spotlight hearkens back to the bardic traditions in which a wordsmith is acknowledged as speaking to and for a people. The closest equivalent today is the poet laureate, of which one is appointed in each of America’s states (minus a handful of outliers, including my own Michigan), as well as on the national level. And while these modern bards aren’t required to “extol the emperor” or memorialize a military conquest, they find themselves on a platform of public discourse in a highly vitriolic political season.

While engaging several poets laureate who contributed to my anthologies, I thought it might be interesting to put some questions to them about their role, particularly as Lent is upon us. Lent in an election year is a strange convergence of themes: On the one hand there’s personal awareness of mortality and sin, expressed in moments of liturgical lament (on such days as Ash Wednesday, Maundy Thursday, and Good Friday); on the other hand there’s a near-constant public barrage of political outrage—everyone blaming everyone else for the country’s problems.

Meanwhile the nation continues to reel from tragedies like the shootings in Charleston and San Bernardino. How does a poet—particularly one interested in spiritual themes of ultimate concern—navigate both private lament and the public discourse of a grieving, fractured community? How does one handle potential expectations that one become a kind of “lamenter-in-chief,” documenting a nation’s events, while at the same time holding one’s political views discretely?

Meet Dick Allen, outgoing Poet Laureate of Connecticut (from 2010-2015), and Amit Majmudar, recently appointed as the first-ever Poet Laureate of Ohio. Dick held his post during the 2012 shootings at Sandy Hook Elementary School in Newtown—upon which his poem “Solace” (reprinted in Light Upon Light) is based.

Amit, meanwhile, steps into his role as not only the first-ever poet laureate of his state but also the first such appointment representing, in his words, “a less-than-one-percent religious and ethnic minority”: He is Indian-American and a practicing Hindu. He’s also a diagnostic nuclear radiologist.

Here is our conversation:

Sarah Arthur: If you could identify one personal experience of grief or lament that in some ways touches everything you write, what would it be?

Amit Majmudar: I can’t, but I think this has to do with the nature of poetry as I conceive of it: That is, I think poetry is, and I want my writing to be, something as various and variable as life. Just as a full and healthy life is not a perpetual fixation on grief, a full and healthy poetic life doesn’t center on this one thing, either. Or on any one thing.

I resist the idea of a single experience or wellspring or impetus or voice or tone for poetry, either my own or anyone else’s or the art generally. I think the Western tradition agrees with this approach. At its center it enshrines these extremely polyphonic books—the plays of Shakespeare for instance, and the many voices of the books of the Bible.

Dick Allen: Like every other human, I’ve lost those close to me—parents, other relatives, friends. Yet what has affected my work and me the most was the Holocaust. Forever in my mind is when, as a post-World War II child, I opened a copy of Life magazine to see the horror of open mass graves at Auschwitz.

That day, I resolved to devote much of my life to confronting such human evil as led to the concentration camps. It so turned out that while others could go into politics, or the military, or medicine or law, what I could do was but write. A consciousness of evil and what confronts and confounds it underlies almost all I write.

SA: How do you navigate the tension between private grief and the public nature of your published writings?

DA: I feel no such tension. William Faulkner, in his Nobel Prize acceptance speech, asked writers to heed “the old verities and truths of the heart, the old universal truths lacking which any story is ephemeral and doomed—love and honor and pity, and pride and compassion and sacrifice.” If the writer does not do this, “his griefs grieve on no universal bones, leaving no scars.”

AM: Private things get masked and remade in the process of taking, or being given, literary form. This holds true even of memoir and “confessional” poems. Because the prospect of publishing—that is, of placing before the public—is almost always desired at some level by the writer, elisions and flattering shifts of perspective and lighting all take place at the production end.

I don’t think this is overly cynical of me to say: I think it is human nature, and also literary necessity. Creative detachment and personal enmeshment are both required to make a good poem or novel or memoir out of uncut unpolished experience. Once that artistic perfection is attained, the embarrassment of revelation vanishes. The only thing a good writer is embarrassed by is bad writing.

Sarah Arthur is the author or editor of eleven books, most recently the anthology Between Midnight and Dawn: A Literary Guide to Prayer for Lent, Holy Week, and Eastertide (Paraclete Press, 2016). www.saraharthur.com.

Dick Allen is the former Poet Laureate of Connecticut and winner of the New Criterion Poetry Prize. His most recent collection is This Shadowy Place (St. Augustine’s Press, 2014).
http://zenpoemszenphotosdickallen.net.