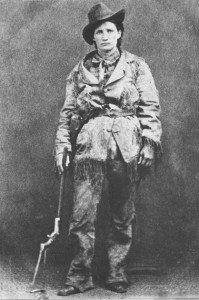 Calamity Jane lumbered around Deadwood in fringed buckskins, spitting, cursing, and waving her whiskey flask in the shadows of the Black Hills. And I want to be more like her.

Guns scare me, of course. Animal skins give me the willies, and more than a sip of hard liquor gets me coughing. Deadwood’s very existence on Sioux land, let alone its rampant gambling, prostitution and murder, screamed lawlessness. But crazy Jane loved. Not with a quiet, corseted, motherly love, but a fierce, table-flipping passion that even she didn’t seem aware of. Which, of course, makes it the best love of all.

It’s hard to separate fact from fiction when it comes to the Old West because often the fiction was the fact. Buffalo Bill Cody’s Wild West, a show he refused to call a show, celebrated the “legend” of the West in real time with sharp shooting, staged robberies, and cowboy/Indian attacks. Calamity Jane joined the production later in life as a storyteller, exaggerating her tales with each performance.

Most historians say it’s hard to know what parts of her autobiographical pamphlet, The Life and Times of Calamity Jane, are true. But there is a general consensus that regardless of whom she shot or saved and when, and if, and whom she married and birthed, she wrestled gender expectations to the ground with her adventurous activities and attire and fought alcoholism to the grave.

And she was generous with her heart. According to Linda Jucovy in Searching for Calamity, “There are stories about her nursing a man who was stabbed and another who was shot, about giving her money and belongings (including, in one case, the shoes off her feet) to anyone she felt needed them more than she did, and about paying a young boy five dollars to give a proper burial to the body of a dog whose remains had been left on a Deadwood street.”

I, at least, choose to believe these tales.

The show Deadwood, which originally ran on HBO from 2004-2006, follows the experiences of many of the legendary and historical figures who ran the South Dakota gold rush town. Jane, played by Robin Weigert, is portrayed as an obscenity-shouting, hard drinking, cross-dressing woman ready to lay down her life for the forgotten ones. She cares for the one surviving child of a massacred Norwegian family with an almost violent fervor. And when smallpox hits the town, she throws herself into their agony quite literally without a thought.

The character Cy Tolliver, the maleficent owner of the Belle Union saloon, orders that Andy Cramed, a man extremely ill with the virus, be taken out in the woods and left for dead. When Jane finds him lying on the ground, delirious and covered with sores, she doesn’t pity him as much as regard him as a partner in the crime of human suffering:

“Don’t apologize to me. I don’t even know ya. Wanna drink of whiskey?”

“Maybe you’d rather have some water. I’ll go get some from the creek. But if you don’t stop apologizing, I’m not gonna get you a goddamn drop. Alright, mister? I’m coming back with some water.”

Jane’s even more drunk than usual, mourning the assassination of her idol Wild Bill Hickok, but she meets Andy’s needs in a way that’s beautifully oblivious, chatting and cussing him up on the patch of dirt that appears to be his deathbed, treating him like any other friend. Those who experience loss, disability, or severe illness often say all they want is to be treated normally. The most loving thing you can do for them is simply sit with them in their pain.

I’ve been thinking about this scene a lot. Would I have the patience to sit with a dying man for hours, a person I’ve never met? The courage to sacrifice my own life in the face of contagious disease? Can I sit with today’s discarded people—whether the sick, homeless, or mentally ill—and see them through their passage in the woods? Jane was ill and weak herself, with nothing to offer but the comfort of her flask, tuneless melodies, and flawed human presence. But she offered, and did not stop.

Recently, my pastor delivered a sermon on James 4, the chapter that reads, “You adulterous people! Do you not know that friendship with the world is enmity with God?” As a younger believer, I would have interpreted “world” as bad words, secular music, drinking, and two-piece bathing suits. If only it were that easy. The world James speaks of is one of pride and covetousness, one that places the self above all else.

Yes, James also talks about the powerful tongue, the sting of hurtful words. And while I may occasionally call my banking system a pain in the ass, I take the name of God seriously and refuse to use it in vain. I can’t even bring myself to text “omg.” I don’t see myself talking like Calamity Jane anytime soon.

But how many more people do we hurt by withholding love? We covet comfort and so ignore the boisterous new neighbors. We worship “safety” and wall off immigrants. We make excuses to refuse apology. While Jane drunkenly mumbled “fucker” in men’s clothing, cramming as many sins as she could into one outrageous moment, she, or at least her story, reflected a lot more Christ than many of the clean-living “whitewashed walls” (Acts 23:3) of the day. Than I.

Recently an editor friend of mine received a note that his journal should not be called “Christian” because it has some swear words in it. “Jesus would not approve of the words and subject matter,” the reader protested. It was a bit of a blow to this committed believer and professor who had just invested many sleepless hours hosting a conference for writers of faith.

I try to picture Jesus flipping through books in order to mark the passages he finds improper, a red pen stuck in his tangled hair. He skips the stories about the drug addict who finds redemption, the poems that cry out for justice for the sexually abused, because he’s stymied by the seven words that cannot be said on television.

“Can’t you just write about family values?” he exclaims, throwing up his hands. “Make it more like the Bible. Safe and squeaky clean.”

I wish Calamity Jane had lived a long, peaceful life. I wish she hadn’t lost her parents and borne the burden of taking five younger siblings out west, by herself in a wagon, at the age of fourteen. And, of course, I wish she hadn’t lived in the unforgiving shadows of whiskey.

But her pictures of simple, nonjudgmental love are like a cup of cool water to my soul. Power made perfect in weakness. A dusty flask dipped in streams of living, gold-flecked water.