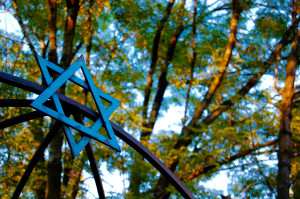 Father Bill offered a set of instructions. “Walk beside me, never on my left, but always on my right.”

“And we’re walking towards Jesus.” He pointed across the church. “Shall we practice?”

We processed up the aisle, an elderly priest and a young, female rabbi. I matched his steps. His brown frock went swish-swish while the long, braided belt knocked against his knees. It was a long path, from the entrance doors of the church up the aisle to the ornate dais. This gave me time to look around. The Stations of the Cross were divided up around the big room, white pedestals with hammered copper sculptures of Jesus during his final moments. It was a sunny morning. The skylights streamed light beams. Every Jesus, big or small, hanging or standing or crouching or sitting, was illuminated. And as if by divine command, there were little specs of glitter dust in each ray of light.

We were alone in the big sanctuary. I wondered if this was what it felt like to be a nun. Quiet, walking towards God, light beams and priests all around. I assumed that my place on Father Bill’s right indicated obedience of some kind.

“We’ll stop here and kneel,” he instructed, “I’ll say a few prayers, and then we’ll get up and walk to the other side of the room. Remember,” he cautioned, his voice soft, “stay on my right.”

I was confused by all the choreography. And nervous. We had a bride and groom to greet at any moment, and I needed to appear composed and confident. But I was worried that during the wedding ceremony I would find myself on Father Bill’s left. And then what? Would I have taken the spiritual place of one of the members of the holy trinity?  Would my presence indicate a desire to usurp their authority?  Would the Christian marriage rituals be ruined?

The Catholic bride had found me through a friend, who told her I was great at weddings. “That’s nice,” I said, when we were on the phone, “but I’m great at Jewish weddings.” The kind of wedding where we stand in the same place, almost the entire time, with little choreography and not many rights or lefts.

She laughed. “I want this for my fiancé. He’s Jewish, and I know it will mean so much to him and his family if you’re there.”

I paused. I told her I’d need a few days to think about it. We’re not allowed to stand beside priests and marry people. We risk expulsion from our rabbinical associations. We risk being shunned by our rabbinic colleagues. We risk getting fired from our jobs that we mostly love. But we also risk confusing the assembled community of witnesses, who, because of our presence, might have the impression that we condone interfaith marriage, or believe that two religions can be successfully blended in one home.

We are ordained as keepers of the faith. It is assumed we will guard ritual and practice and provide entryways and opportunity. Standing beside priests and blessing a couple in a multitude of religions doesn’t exactly honor that guardianship. As a result, co-officiation is a major taboo, and for twelve years—to avoid social and professional ostracism, and because I too had been opposed to co-officiation for many of the obvious reasons—I adhered to the expectations of the rabbinate.

But I was pulled by the bride’s voice and her desire to create something Jewish for her Jewish groom. I wanted to be part of her plan to ensure that Judaism was represented during their marriage rites, even if I had no idea if they would bring Judaism into their home.

She didn’t have to say it, but I also knew she was worried that the groom’s family would be uncomfortable in the church pews, sad perhaps, even if they loved the bride. They’d feel out of place. My job would be to help them feel more comfortable. I wanted to nurture and soothe. I wanted them to know that a leader in the Jewish community cared about them.

Clergy get into trouble when we feel this pull—we have a natural instinct to care for others, and so our governing bodies have ethical guidelines in place so that we don’t overstep boundaries and compromise Judaism, our careers, and our relationships. And yet I found myself calling the bride a few days later to say yes, and to explain the situation and a few rules: I couldn’t have any videography in the church. No tagging me in Facebook photos. I would arrive, perform the ceremony alongside the priest, and then take leave.

“You won’t join us at the reception?” she asked.

“No,” I responded. “Not even the first glass of wine.”

“Who will help us do the Jewish dance?” she asked.

“His family will know what to do, I’m certain of it.”

If I said no, and the next rabbi said no, and all the rabbis after me said no to this young couple, all those no’s would translate to un-love and un-faith and un-God and un-everything. And I’d hate to think I chose to be a rabbi only to say no to people who come and ask me to perform rituals that I might be disinclined to perform, but that if I just stretched a little bit, maybe the way Jesus got stretched on that cross, then we could make Judaism a little bit more available to those in need. Catholics included.

Image above is by Jamie Mitchell and licensed by Creative Commons.

Danielle Leshaw is the Rabbi and Executive Director of Hillel at Ohio University in Athens, Ohio. She’s been published in The New York Times, Tablet Magazine, The Jewish Daily Forward, Mutha, Moment Magazine, is a Puschart Prize nominee, and is a two-time recipient of the Ohio Arts Council prize, the leading state grant for writers and artists. To see more of her writing, visit www.DanielleLeshaw.com. She’s also on twitter (far too frequently) at @RabbiDanielle.