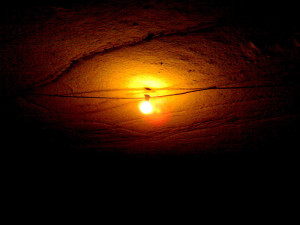 How do you know if it’s a poem?

Maybe it’s an old-fashioned phone book, the white pages with everything you need to call (or recall) a distant cousin, a local star, a first kiss.

Maybe it’s pre-op, the nurse anesthetist, a tree of life, trying to comfort you. Oh lazy kabbalist, your left eye dull, no divine emanation to be found there, not even when your daughter, holding your hand while fluid drips into your vein, looks deeply, lovingly to draw forth the hidden light.

The last dark poem you loved, the poem you wanted to love you back and live with you under a bridge: how did you know it was a poem and not a prescription for despair?

It’s been so long since you visited Uncle A for breakfast, the elegant table, a grapefruit half glistening with sugar crystals before you. How is your Jewish detective novel coming along, you ask him? Are you disappointed with heaven, or is it hell or somewhere in between? I don’t know the day of your yahrzeit, you tell him, or I would say Kaddish for you, you lie.

A lie, that’s good. That must be a poem.

The secret of God’s unpronounceable name: Who knows it? If it’s you and you reveal it, are you a poet, and is the revelation a poem?

Maybe it’s a poem only if outlives its feelings. Like orange rinds, coffee grounds.

If I were to designate a bathroom just for you, a place where you would be safe, free to pray or play in a human body for a few minutes, would you, locked in with the smell of life, be a poem?

The holy hush of ancient sacrifice. Which is the poem, the sacrifice, the hush, the holiness, or the words describing the act?

Do you need a calendar to tell you when to turn to verse?

Maybe prose is the supreme lyric, the horizontal song, the democratic way to fight intolerance.

Doctor Poet’s orders: take a heroic couplet twice a day. If in forty-eight hours your fever doesn’t break or if you break out in a rash, call a teacher tacking a bright alphabet to a bulletin board in August, a week before the monsters return. Have her arrange the letters to spell your cure.

On Facebook, status update from the ghost-dog. Where in the world is it now? Is it waiting for you to decompose, waiting to gnaw on the beloved’s bones?

It baffles you. It must be a poem.

What was broken before, is broken still: the world that lives in a poem.

And the kettle drum, the bassoon.
Your brother waiting for the first pitch.
What you believe in for a few lines.
Then it’s over. That’s how you know
it’s a poem, a real poem. The rest
is marketing, public relations. Selling
you what you need to live now
as if there were no yesterday, no tomorrow.

Image produced above is by in transition, licensed by Creative Commons.