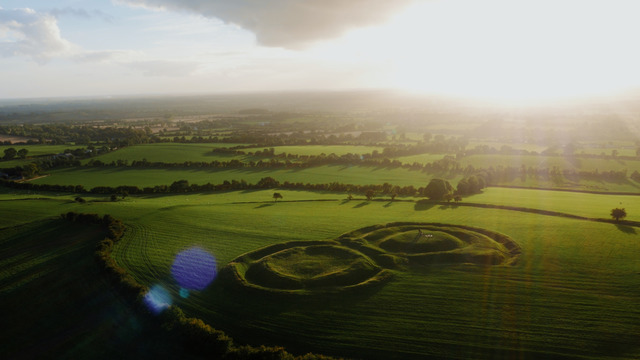 A few summers ago, my husband Tom and I were in Dublin for a week, and one day, we took a tour bus to two ancient holy places—thin places, the Celts would have called them: spots where heaven and earth are very close to one another, where the ordinary distance between the two collapses.

When I was an evangelical teenager, I thought the idea of thin places was sort of cool, another way to describe that feeling I got when I sat on the beach during vacation and saw an especially vibrant sunset, or stood on top of a mountain and spun slowly to take in the vista. The world was transformed in a moment of extraordinary beauty, and so was I, for a little while.

I felt close to God, closer than I felt singing hymns or listening to sermons. Church, in its very weekly-ness, wasn’t extraordinary like that. I’d never been one of those “on fire for Jesus” types, like my friends who raised their hands in worship, but when I felt that spark, I thought maybe for a while I was like them.

But a decade after those days, on our Dublin morning, there was no rosy sunrise. It was June, but chilly, and we wore long sleeves and pants and jackets. Tom and I yawned and clutched coffee cups. We climbed aboard the tour bus at a stop in front of a government building just north of the O’Connell Street Bridge and headed out of town, bound for the ancient sacred spots.

In the New York Times in March 2012, Eric Weiner, author of a book called Man Seeks God: My Flirtations with the Divine, wrote about his thin places. “Thin places relax us, yes,” he says, “but they also transform us—or, more accurately, unmask us. In thin places, we become our more essential selves.”

Weiner’s essential self is unmasked in an eccentric set of locations. Among them he counts Hong Kong International Airport, a bar in Tokyo, a Sikh temple in New Delhi, Jerusalem (the whole place), and Powell’s, the famous bookstore in Portland, Oregon. “You don’t plan a trip to a thin place; you stumble upon one,” exhorts Weiner. But you can do some things to game the system:

For starters, have no expectations. Nothing gets in the way of a genuine experience more than expectations, which explains why so many “spiritual journeys” disappoint. And don’t count on guidebooks—or even friends—to pinpoint your thin places. To some extent, thinness, like beauty, is in the eye of the beholder. Or to put it another way: One person’s thin place is another’s thick one.

Medieval Christians believed that everything in the created order is sacred, a gift from God that we offer back to him. Some things are more sacred than others because the world is broken and things aren’t perfect, but in the holiest of sacraments, like the Eucharist, the world to come—heaven—breaks through to earth for a little while.

In class recently, attempting to explain this concept to my students, I said that this view holds that things in the world are somehow more than just what they appear to be—that reality is bigger and more than what it looks like on the surface.

“Like when you have a good meal with friends,” I said, “and the sum of the food and the drink and the conversation adds up to—well, more, somehow—than each of those things separately. And you feel holy and grateful.”

In the Eucharist (at least in most traditions) Christ is present, if not actually physically, at least mystically, in a way that is somehow more than in other places. And then we take him into ourselves as an act of worship. Even though the low-church evangelicalism of my youth resists this interpretation, referring to it as just the family meal of Christians, a place to remember Jesus’ sacrifice—despite that, when I think of taking communion in the church where I grew up, I remember a holy hush. It was serious business. When we celebrated communion, it was not an ordinary Sunday.

An hour outside Dublin, we parked and disembarked, headed on foot to the Hill of Tara—an archaeological complex, most of which is still buried under grass.

According to tradition, it is the seat of the High King of Ireland. Historians are endlessly fascinated with the Hill, arguing over whether it was in fact the High King’s seat, or more of a place where ancient sacrifices were made, both of which sound like something straight out of an Ursula Le Guin novel to me. There’s a number of ring-forts and tombs, and a stone that would scream at any King-to-be who failed to pass a series of tests proving his fitness for the royal position.

It was cloudy when we reached the Hill, and I had worn good sneakers, assuming that “hill” was a euphemism for mountain. But no: it was barely a euphemism for hill. It was more of a low, very wide grassy mound, bumpy in odd places because of all that’s still buried beneath, and hard to walk across, since the soft grass obscured some of the lumpier bits.

Our guide told us that on a clear day you can see the entire country from the Hill. I thought that sounded impossible, like claiming you can stand in the middle of a soccer field in suburban Long Island and see all of New York City when the weather’s good enough. I suspected it was a myth invented by bored tour guides, since the weather is never clear enough in Ireland to test it out.

We took a few pictures and walked around a little, and I tried to imagine what it was like a thousand years earlier. But all I could see was the grey clouds and the modern buildings a few ridges away.

We re-boarded the bus at the Hill and headed for Newgrange. I napped while the bus wound its way toward the next stop; as we approached the destination, Tom shook me awake and pointed to a mound of rocks on the hillside. “That’s where we’re headed,” he said.

A short walk and an informational video later, we were standing in front of the Neolithic mound—“older than the pyramids,” Tom whispered in my ear as we approached.

I was impressed by its size and preservation, until the guide told us that this was actually kind of a reconstruction; an archaeologist, after extensive research, was carefully rebuilding the mound, which had been buried and trampled a bit since it was constructed by a mysterious forgotten people around 3200 BC. Without that reconstruction, it would just be a heap of rocks, albeit one with a well-preserved interior space. And we were brought inside, a few at a time.