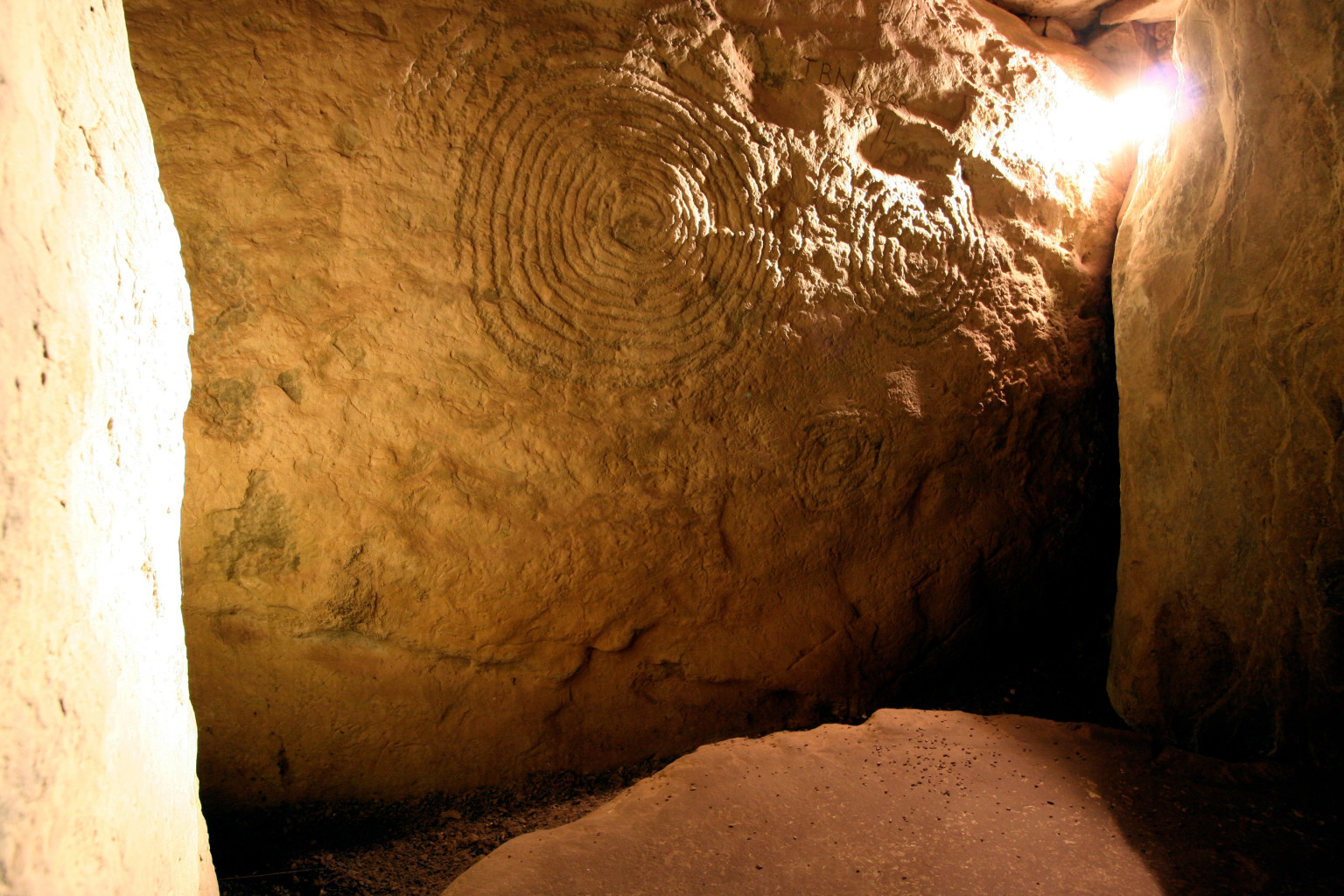 In the rocky cave-like interior at Newgrange, the air felt damp in my nostrils. It smelled of dirt. The passage was narrow, but it opened into a slightly wider room where a number of us could gather.

“We don’t know what they did here,” the guide told us. “All we know is that for seventeen minutes a year, at the winter solstice, the light shines in through that little opening above the door”—he pointed to a small rectangular opening—“and illuminates this little room.”

He told us you can enter a lottery to get tickets to be in there for those seventeen minutes per year, but so that we could see what it would be like, they’d shine a flashlight in through the hole, mimicking the sun’s movement.

A flashlight shone in, and for a few brief moments, the chamber was flooded with light. I looked at the walls around me: plain white rock, cold to the touch, a handful of nicks and scratches here and there left by tourists in the past. What did they do in here in seventeen minutes per year? I wondered. I waited for a sense of awe to break over me, but all I did was squint when the beam hit me.

After it was over, we squeezed out and started back for the visitor’s center. As we picked our way back down the gravelly path, I heard others behind me marveling over the experience. I blew hot air on my palms and wondered where I could get a hot cup of coffee.

I suppose Weiner would say that for me, the Hill of Tara and Newgrange were thick, grey, and unremarkable because I violated all of his rules for experiencing The Divine. I had some expectations; at minimum, I expected the Hill of Tara to be a little more hilly. I assumed a Neolithic tomb would have some dead bodies in it. And I got there not by wandering, but because a Lonely Planet guidebook and my husband led me.

History is often mundane, dusty, and far less transporting to the average person than a ruby-red sunrise. Uncovering the everyday thin places is dry, hard work: stacking stones on top of each other, braving blisters and fingernail dirt and mildew, tripping over lumps in the ground. And sometimes you get there, and after all that trekking and stacking, they’re still thick.

The truth, I think, is that if I, mere visitor, was to have a “flirtation with the Divine” on the Hill or Newgrange—it would sort of be cheating. All I did was get on a plane for six hours and a bus for another hour or so. I didn’t really even know what we were going to see when I boarded the bus. I was, at best, mildly interested.

At my church these days, we celebrate the Eucharist every week. Sometimes I help set up and clean up the table. Members of the church bake the bread and take turns bringing it, so sometimes it’s sourdough; sometimes it’s whole wheat; once it had raisins in it. Occasionally someone makes a delicious challah. We add a big bottle of port wine.

Before service we slice the loaf halfway to make it easy for our pastor to rip it in half later in the service, and we pour the wine into a crystal decanter. After it’s all said and done and taken, we clean out the cups and give the leftover bread to the children, who are always clamoring for it.

I know what I believe, though the older I get, the more willing I am to admit that often, I barely believe any of it. Yet one thing I cling to is this: somewhere in between pre-slicing and wiping out the bread plate, there is a thin place. This mundane bread and inexpensive wine, gifts of God, become an offering back to him.

In our ritual, we lift the wine and the bread, like a sacrifice, and then we eat it. We eat God, a little, somehow.

But it’s just bread and wine. Though I know how sacred this is, it still feels almost banal. So, although I come away from the table with a heart brimming with joy sometimes, more often I walk away preoccupied, already thinking of the week ahead.

But I choose to believe—I have to believe—that I have, right there, experienced a thin place. I have received the gift of God and swallowed it, and now, it is part of me, whether or not I was paying attention.

Lately, I’m finding my belief surfaces in places that are more and more mundane. I’m still struck by exceptional beauty—seeing the mountains as I fly into Los Angeles, eating a crisp late summer meal of baguette and brie and apples while I sit below the Eiffel Tower, discovering wild waves breaking against the cliff coasts of Whidbey Island, reveling in the crash and flash of a storm rolling in over the New Mexican desert.

But the tight joy I experience then is ringed with sadness. I know that I might return to those places, but I’ll never experience that particular flash of wonder again. In the midst of a weekend with friends or a holiday, I already feel the loss that will come when it’s over. These are moments of transcendent beauty—but not, for me, thin places.

Where my world gets thin is in the banal repetition of the weekly Eucharist. And this fact teaches me to seek belief in my real life, the one that wears me out: roll out of bed too early, go running, shower, ride the subway to work, grade hundreds of essays, teach classes, answer emails, edit articles, try to write, try to pray, fail, mess up, collapse on the couch, collapse into bed, rinse and repeat, rinse and repeat.

Salvation is exceptional, but I am also being saved every day. I am saved in the interstitial moments, the ones spliced in with the ordinary repetitive boring stuff.

I believe best in flashes: the dear one across the table from me at a pub; the eyes of a student who’s listening intently to my lecture; the cup of coffee, the light falling across the path, the smile of someone I love, the pillow I rest my head on at night.

My doubt falls away, and I see God, a little, there, and I think God sees me too.