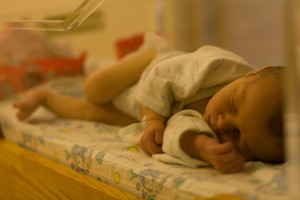 Every year, when a specific national obstetrics and gynecology conference (or is it pediatrics?) comes to the Washington Convention Center, the traffic is snarled for blocks along New York Avenue, and the sidewalks thronged thickly with pedestrians. Its scale is such that it seems, in this one local’s perspective, to be outranked by the annual meeting of the American Israel Public Affairs Committee—only without the haze of whirling blue lights from cruisers and snipers atop the roofs nearby.

I don’t have to drive by it now, but many were the days that my car inched forward infinitesimally, as I tried not to swear under my breath. And always across the street from the convention center, on the sidewalk in front of the old Carnegie Library, were a clutch of protesters holding signs bearing the legend, “Circumcision Decreases Sensation!”

And at those moments, I was immediately thankful that my children—younger then—were not in the car and I did not have to explain the terms of the debate. Frankly, before that I hadn’t even known there was a debate.

Although I had very limited experience with the subject matter at hand (Ha!)—a virginal, if hypocritical, singlehood in which I was kind of a tease—I had been duly instructed in the notion of circumcision by no one less than my Mississippi mother, who noted its virtues as a sign, in her view, of civilization.

She then proceeded to tell me that my brothers had been circumcised at King’s Daughters Hospital by one Dr. Corbin upon their births. “A Jewish doctor,” she noted, in the same approving tone that Archie and Edith Bunker always referred to Dr. Shapiro on All in the Family.

In my memory, the recollection also gets wrapped up with Dr. Corbin’s other contribution to the Langston family, which involved my brother John’s childhood asthma, and Dr. Corbin arriving for a house call and demanding that my mother “get that Pine Sol,” which she used to mop the floors, “out of the house immediately!”

In any case, I never thought about any of this again after 1984 or so, not until circumcision suddenly became a debated practice, and in some quarters of the public imagination, a bodily violation akin to rape or a war crime. I had lived in England for a year in the late 1980s, where the practice is supposedly less common, but I was not exposed, as it were, to any evidence. Later, though, there were studies indicating that circumcision reduces, marginally, the prospect of AIDS infection.

I’ve long been an admirer of writer Andrew Sullivan, who has, perhaps more than anyone in the United States, been a proponent of discontinuing the practice. I considered his opinion way outside the mainstream, especially when my husband, who is progressive on many things, was pretty darn mainstream on this one:

“Who wants to look at a snake in a raincoat?”

On the very morning of Election Day 2000, on what would eventually yield the constitutional bloodbath of Bush v. Gore, I attended at 7:00 a.m. the bris of my dear high school friend’s firstborn, and saw my friend’s rabbi father gently sop sweet wine on his finger and drip it into the baby’s mouth after the mohel had finished his task.

In any event, it did not occur to me to do otherwise when my son was born in 2004. The procedure was performed the day after he was born, right in my hospital room, by my own Iranian Jewish obstetrician, as I stood, blowsy and unkempt, in my bare feet on the linoleum floor. And that was that.

Without even thinking about it, I had married culture and tradition in my head and assumed the congruence of the practice with my own faith and dogma. Funny, how the ground can shift around your feet, though, in the process of living a life. At least on this one issue, it seems, I had suddenly fallen on the wrong side of history.

The surprise and recognition hit me when, reading the Bible in my bed one night before sleep, I came upon Philippians 3:2:

“Watch out for those dogs, those evildoers, those mutilators of the flesh.”

How many times had I skated past that verse in reading? Perhaps thousands. Lay aside, for a moment, the apparent anti-Semitism of the Apostle Paul’s words (he was, of course, an adolescent in his own faith then, trying to live down his pharisaical youth). And also lay aside the somewhat tamer translations, the ones that translate the verse more or less as does the New American Standard version, in which I soaked myself in my Calvinist youth:

But mutilators! I had somehow assumed that the practice of circumcision was as much Christian as it was Jewish, and that it was only Europeans and Portlandia-type atheists, moralistic Utopian hectorers, who objected to its widespread usage.

The notion that the Apostle Paul in his humor and sentiments might be closer to, say, Markos Moulitsas, or the editorial board of The Nation magazine, is still taking some getting used to.

The Gospel may be eternally the same, but it’s eternally new, too.

Image above is by Bridget Coila, licensed by Creative Commons.