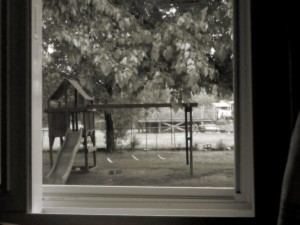 Early one recent morning, I’m still half-asleep. The cat lies curled up between Craig and me, and when my leg moves against her, she snarls.

“Hey, now, little one,” he says, bending his face down to her and scratching her softly behind the neck. “That’s not the way to act, is it?”

In my sleepy state, I hear him talking to a child, our child. “You would’ve made such a good father,” I think as I fall back to sleep, drowsy logic catching on my use of the conditional.

A year ago, when we went to our first session of church-mandated premarital counseling, the therapist advised us to discuss the two most-cited sources of marital discord: money and children—“or child-rearing,” she qualified, glancing at the information sheet.

“Do either of you have children from a previous relationship?” We shook our heads. “Are you two thinking about having children?” She glanced at the form again, at the space in which I’d written my age, and quickly added, “either your own or adopting?”

Earlier this year, a few months after our wedding, Craig and I attended a baptism. The priest had just asked the parents why they’d brought their babies to the altar. “To be accepted into the body of Christ,” they answered.

I choked up. Partly because of the struggle the parents went through to bring those babies into the world; also because the ancient sacrament never fails to move me. As many times as I’d heard the Rite of Baptism performed from the Book of Common Prayer, that Saturday, I was listening for the first time—to words not from the BCP but from a blue pamphlet handed out beforehand in this Catholic parish run by the Salesians.

Later, on our walk home, Craig said, “I wish we’d met ten years earlier, especially on a day like today.”

I knew what he meant. A day when we’d witnessed babies being baptized. If we’d met ten years earlier, we probably would’ve been able to have children of our own, watched trickles of holy water run down their soft scalps as they were accepted into the body of Christ.

Those days have passed us by. I no longer try to pretend otherwise. But occasionally, as at that baptism, I find myself facing what feels less like acceptance and more like a choice not to think too much about it.

Every night for months, I’ve pushed a small green-yellow tablet through its blister. Yes, I’m fifty, but as the tough-voiced receptionist at my gynecologist’s office told me before I went on the low-dose birth-control pill, “If you still get your period, you can get pregnant.”

The advice was straight out of seventh-grade sex education but I’d wanted to believe otherwise.

“What are you doing for birth control?” she asked.

Her voice got even more businesslike. “Well, first thing you do, is come in and take a pregnancy test.”

“When was your last period?”

Silence, and I heard my voice through her ears. Did I really sound so irresponsible, so in denial? I’ve always considered myself responsible and no-nonsense on matters of contraception, not someone to take a chance. So what was going on here?

I was almost the same age as the Oldest Woman to Give Birth listed in my 1971 edition of the Guinness Book of World Records. (Now, of course, we’d have to add a footnote—to give birth to a baby conceived with her own eggs and fertilized and gestated in her own womb.) I’d met the man I would marry. And I was imagining myself in maternity wear, the colors to paint a nursery, what we’d do about kindergarten.

I’d assumed that the odds of conceiving were nil—but of course they weren’t. Small, but not nil. And suddenly, that tiny percentage bloomed a myriad of possibilities, both giddy and troubling.

What if I did conceive, after all—at my age, well, what then? I couldn’t cite the exact odds on chromosomal abnormalities in babies born to women over forty-five, but I had a general idea they didn’t fall in my favor.

And then what? Some decisions I never wanted to have to make. And yet, by not taking any precautions, I had made a decision, hadn’t I? And, later, by going on the pill, I made another.

We, I should say. I didn’t make those decisions alone. One night, we went back and forth:

“I can barely run with my bad hip. Will I be able to play catch with my kid when I’m sixty-five?”

“Do you like Elizabeth Ellen as a girl’s name?”

“I’ll be seventy-seven when he’s twenty-one.”

We’ve accepted the fact we won’t have children, either our own or adopted. We’re OK with it. The topic didn’t take up a whole lot of counseling, premarital or otherwise. But every day, one way or another, we mourn our childlessness. Not always consciously, and not always strongly. Sometimes it’s relief at having flexibility in our schedules, more time for each other. But whenever we pass babies on the street, we catch each other’s eyes.

And other times, we just squeeze hands.

This post was originally published on June 15, 2012 with the title “In Another Life.”

Image above is by David K., licensed by Creative Commons.

Lindsey Crittenden is the author of The Water Will Hold You: A Skeptic Learns to Pray, and The View from Below: Stories. Her essays, short fiction, and articles have appeared in the New York Times, the San Francisco Chronicle, Image, Bellingham Review, The Best American Spiritual Writing, and other publications. She lives in San Francisco, where she teaches writing at UC Berkeley Extension and The Grotto.