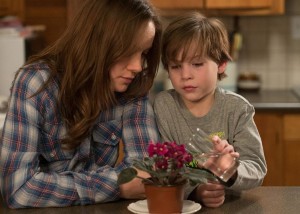 The most obvious analysis of Emma Donoghue’s Room, one of last year’s most heralded films, is on the basis of what it says about imagination.

In the film version of the novel, five-year-old Jack is provided a means by which to live his life through images, crafts, pictures, and stories. That would not be so extraordinary, nor his exceptional character so marked, if it were not for the fact that he has lived his entire existence closed up inside a small shed.

Jack’s mother, who was abducted seven years before by a sexual predator, is his co-prisoner in a world no larger than twelve feet square. But she has made the most of every inch.

A feat of maternal determination makes all of her efforts for him dual-purposed: she has him do exercises with her to stay physically strong, but also to provide him with some concept of distance and space; she has him read aloud from a book to give him an education, but also so that he can access a type of freedom that is otherwise denied; she has him mark his height upon a wall to gauge his growth, but also to give him something to look forward to—a time in which he will outgrow the room.

For the flip side of wit and fancy is the ability to distinguish what is actual from what is abstracted. That skill is no less key to the boy’s humanness, nor to his survival, as the film makes clear.

The difficulty of the mother’s task in helping Jack grasp reality should be ironic, considering the stark horror of their circumstances; if anything, reality would seem all too clear. And yet, upon reflection, it also appears that the woman’s talent for giving the boy a mind that can escape his circumstances is the very thing that works against his groundedness.

Of course, she knows what it is like outside the room, but he cannot fathom it.

The real world she describes to him is as foreign as the concept of color is to the blind, or the sense of sound to the deaf.

Words are themselves only icons for reality, and however vividly she tries to communicate what the outside is like, she is confronted with the gap that only experience can provide. And experience is the one thing she cannot give with regard to the world beyond the room’s walls.

She is also hindered by the television that her captor provides for them. She has always told Jack that the flickering pictures he sees there are not “real” in the way that she is, and he is, and the bed, plant, and table are. But when it becomes important for him to know the difference, and that there is a concrete counterpart for all that shimmers on his Platonic cave’s wall, he grows angry at the leap he is asked to cross.

For what does he know of trees except the ones that aren’t real on TV? What has he known of dogs and giants and the thousand imagined things he’s heard of, except those that appear in his brain, cast by the stories he’s been told?

He is not even certain as to the reality of the man who comes into the room every night to sleep with his mother.

Jack is put into a louvered wardrobe for the night, and when the predator—his father—uses a code to unlock the door, all he can see is part of a man through the slats. The figure seems to flicker insubstantiality like the images that make their way onto the screen through bad reception.

But when the predator loses his job, and the power is turned off in the room, the woman realizes that their dependence on the man cannot be born any longer. They could starve or freeze if something happens to him, or even to his ability to pay for what he provides.

So she hatches a plan, but it depends on Jack’s ability to grasp what reality is.

Without spoiling the plot, the means that she employs to make her son comprehend the difference between image and material is a masterful achievement. For Jack, like all of us, has to know that the real is greater than his experience—that there is a world beyond the room he lives in, and a life greater than even his imagination can depict.