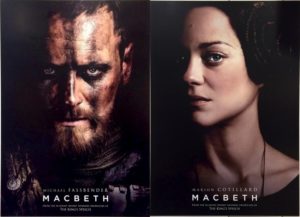 In Justin Kurzel’s Macbeth, the writers frame the story in such a way that the common motivations are nested within, or are born from, a new one: the story opens upon a Scottish heath—damp, cold, and windblown—where the Thane of Glamis (Michael Fassbender) and his Lady (Marion Cotillard) stand at the graveside of their young child.

The boy has succumbed to some sort of pox, and the grief the parents bear is depicted so that the pain is the kind of blunt, brutal type—the emotional equivalent of a limb cropped away with a pair of dull shears. From now on, the life of “going on” will be as tedious as the life they have just come through, to borrow a line from later in the play.

Of course, this is not in Shakespeare’s work itself, but the writers and director have taken artistic license from a much-debated line spoken by Lady Macbeth when she is encouraging her husband to commit regicide:

I have given suck, and know
How tender ’tis to love the babe that milks me.
I would, while it was smiling in my face,
Have plucked my nipple from his boneless gums
And dashed the brains out, had I so sworn as you
Have done to this.
(Act I scene VII 55-59)

Mere rhetoric or no, scholars have debated whether the couple have—or have had—children, as none appear in the play. But as the action continues, Macbeth is jealous for his own issue, a fact that motivates his murder of Banquo and his attempted murder of Banquo’s son, Fleance, whom the witches have promised the crown of Scotland instead Macbeth’s heirs. A crown without a lineal heir is a barren crown, stoking the flames of his bloody ambition even higher.

So it would seem a fair reading of the play that: 1) Lady Macbeth has had at least one child; and 2) Macbeth has no heir at the time the action takes place.

Further, in the new film version, Macbeth is fresh from this grief when the weird sisters come to tempt him. Weary from battle fatigue—and depleted from the loss of his child—he is doubly susceptible to the strange news of his future. His long-held desire for a greater estate, tempered by his principles, can more easily fly out to evil ends in a psyche so rocked by exhaustion and grief.

Likewise, couched in this injury, Lady Macbeth is responsive to her sorrow in a perverse way: she will amend the profound loss with a profound gain: bereaved of one heir, the next shall have the crown.

Kurzel and his writers take this incentive—an ambition for a child to be in recompense for the loss of a child that was—into each scene of interplay between the couple. When Lady Macbeth speaks her immortal words of appalling savagery (above), she does so while in the midst of inciting her husband’s passion, seducing him body and soul; as they writhe in intercourse against a tabletop, they germinate the seed of their next heir born in the bloody plot of King Duncan’s death.

Is it a contradiction, to be consumed so utterly with the grief of a child’s loss that a mother uses the willing murder of that child as a measure of her fealty to a sworn oath? Or is it the height of metaphysical conceits, to compare the sacred depth of the mother-child bond to the depth of Lady Macbeth’s passion for the crown?

To win her husband to her plan—she must dry up the milk of human kindness that sways him; here, in this film, the chasm of their shared child-loss is the rhetorical means by which she drives home her plot.

The rest of the well-acted acted film—eerie and enchanted in its feel, respectful if at times curious in its execution—is shadowed by the loss of the Macbeth heir. The King is haunted by a young lad, slain in battle, who seems son-like to the hero; his spectral nature, throat slit and wide-eyed, devastates the man whenever he appears.

And the Queen, in her famous sleepwalking scene, has gone mad not only from remorse, but also from the mother’s sorrow she has borne. The writers give her a stunning audience for her soliloquy, which explains much of her reason, while not forgiving any of her purpose.

Never in the annals of literature have the avenues of evil been so greatly mapped as in Shakespeare’s work. God ponders the heart, the Proverb says, and in this rendition of the great man’s work, the heart gives God much to consider.