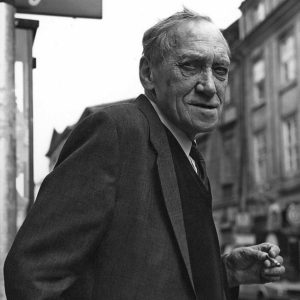 The following is an excerpt from Meis’s new book Dead People, published June 24 by Zero Books.

Leszek Kolakowski died July 17, 2009. He was a philosopher, a man of letters, historian of ideas. He lived the twentieth century life. It sucked. But like many a Pole, he made the best of a bad situation. The opening lines of the Polish National Anthem are, after all, “Poland has not yet perished.” Poles know that everything will turn out for the worst. It always does.

Kolakowski grew up during the Nazi occupation of Poland and came of age when the Nazis were exchanged for the Soviets. Liberation, in Poland, is the name for a short period of chaos between oppressors. Kolakowski did his best to think with the times. He started out a Marxist—not a ridiculous position for a young anti-fascist to take in those days. It was not, however, a position that any self-respecting Eastern European could hold past the mid-fifties. Kolakowski had some self-respect.

That’s where it gets interesting. Never an either/or sort of fellow, Kolakowski opted for nuance. There were things about the socialist mindset that he liked. He also considered himself fundamentally conservative. It’s a tricky position, a perfect place from which to be misunderstood by everyone, on every side. For better or worse, Kolakowski was too smart to care. He wrote a unique essay that tried to make sense of this precarious intellectual standpoint. It is short, bold, and brilliant. He called it “Conservative/Liberal/Socialist.”

It’s impossible to be a conservative/liberal/socialist. Except that Kolakowski did it. His argument is so simple and so obvious that it has never really caught on. Smart people tend to like complications. Only truly brilliant people like Kolakowski are able to stop being so damn fancy and get back to simplicity.

Kolakowski’s essay is a model of concision. Its three central propositions can be summed up with the following:

First, Kolakowski is a Conservative because there is “no happy ending in human history,” and “we would do well to expect the worst.” This also comes from the Pole in him. That good ol’ Enlightenment idea that we will improve man through better institutions strikes him as dubious at best. Usually, we screw things up. So, better to back off than to give ammunition to those who would make of society a giant corrective Gulag. And there is always some brilliant monster out there perfectly happy to do just that.

Second, Kolakowski is a Liberal because he believes that the State has a role. If nothing else, it guarantees a base level of security. This base level of security provides an arena in which people can compete for goods and services and generally go about the business of being human. It ain’t grand, but it works, more or less. Much human misery will still exist but, after all, “to make people happy is not the function of the State.”

Third, Kolakowski is a Socialist because he doesn’t see massive social inequality as a good thing simply because it exists. Don’t be so conservative that you end up justifying every shitty way that people get over on one another as the natural order of things. Or as Kolakowski nicely puts it, “The kind of conservative anthropological pessimism which led to the astonishing belief that a progressive income tax was an inhuman abomination is just as suspect as the kind of historical optimism on which the Gulag Archipelago was based.” Social mechanisms that create for a more level playing field can be very nice indeed. It is not impossible for us to be nice to each other sometimes.

Having made these three points, Kolakowski finishes with this:

So far as I can see, this set of regulative ideas is not self-contradictory. And therefore it is possible to be a conservative-liberal-socialist. This is equivalent to saying that those three particular designations are no longer mutually exclusive options.

Clean, laconic, sane. Every time I read the essay I’m reminded of the fact that it is wise. A wise man passed from this earth a few years ago. Of course, he’d have been the first to agree that no one will understand or care.

Dead People, written by Morgan Meis and his wife Stefany Anne Goldberg, is a book of eulogies, written for an eclectic assortment of famous and interesting people who died in recent years. The book covers twenty-eight dead people in all, including intellectuals like Susan Sontag, Christopher Hitchens and Eric Hobsbawn; musicians like Sun Ra, MCA (Beastie Boys) and Kurt Cobain; writers like David Foster Wallace, John Updike and Tom Clancy; artists like Thomas Kinkade and Robert Rauschenberg; and controversial political figures like Osama bin Laden and Mikhail Kalashnikov. Published by Zero Books, it is also available from Amazon.