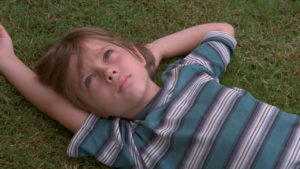 The hardest part of watching Boyhood for me wasn’t the film itself but going back to the main menu. You’ve just been immersed in this family’s life for twelve years, and now suddenly you see select moments of that life assembled together in a collage of stills as that soft, wistful song, “Hero,” plays:

And the emotion finally hits me. The visceral sensation of time having passed. How much you miss, and yet how much becomes a part of you, nonetheless.

Linklater’s films are neither of these for me. I don’t want to have the kind of life he depicts or even, to a great extent, to live in the same world he believes in. Yet, I want to spend time with them, and that’s why I’m convinced there’s something incarnational in his imagination.

I mean “incarnational” in James Smith’s sense of situating us in our finite, corporeal, created bodies, and, more, helping us experience that situatedness as a good.

Boyhood—along with his trilogy Before Sunrise, Before Sunset, and Before Midnight—makes us experience time like no other film I’ve seen.

And I’m putting Linklater up against filmmakers like Malick and Jim Jarmusch who do time well. Malick shows us time as a swirling fluid that enwraps us, a festival time that is ever-present. Jarmusch shows us time as a medium for world-building, a background for boredom, or a spring to wind to increase tension.

Linklater shows us time as the substratum of our lives. That’s why I appreciate his films for moments rather than stories or characters. Sure, Jesse and Celine are cute in Before Sunrise, but I think of it as a film about how two people somehow “click” and the mysterious and magical way that intimacy develops.

Similarly I’m not especially invested in whether Mason in Boyhood stays with his girlfriend or goes to school for photography—or even if he maintains decent relationships with his parents. The film only asks that I abide with these characters for some period of time, recognizing each person’s attempt to hold his or her life together and be basically decent.

There is some real drama in the movie, especially when Mason’s first stepdad becomes an increasingly violent alcoholic. But these moments fade into episodes in the subtler but more powerful drama of time itself, as we watch, sometimes almost imperceptibly, the year-by-year jumps.

Hairstyles and clothes change. There’s new music. Lines slowly form on the faces of Ethan Hawke and Patricia Arquette. And Mason, of course, turns, sometimes strikingly, from a young boy of six into a young man of eighteen.

Time-lapse shows us time, too, but in a mechanically accelerated form. Boyhood shows us time more in memories, little snatches of events, sometimes trivial ones, that make up the actual stuff of our conscious experience.

Linklater’s gift to us is to put us in touch with this imperceptible but essential flow of experience. When I see the Boyhood menu screen collage, I mentally replace all those movie stills with memories of my own life—my firstborn in the hospital nursery, my wife and I walking the dunes on Lake Michigan, a flat stretch of road I’ve seen so often in Indiana.

Just before Mason leaves home for college, he cluelessly rejects his mother’s attempt to connect with him.

She’s visibly disappointed, and then she breaks down along the lines of: This is the worst day of my life. You’re leaving, and you don’t even care. You grow up, get married, have kids, get divorced, get a degree, then your kids all leave you, and you know what’s next? It’s my fucking funeral! I just thought there would be more.

That last thought is so sad to me. I get it, but only in terms of other movies. Other movies offer us escapist fantasies of life being far more exciting than it usually is. Other movies try to convince us that we’re okay because we spent $12.50 and a couple hours to be entertained.

But Boyhood’s whole point is that there doesn’t have to be more for there to be real value. The mother’s frustration runs against the grain of the argument of the whole film. Maybe it’s a testament to Linklater’s artistry that he doesn’t offer a rebuttal in the film but lets the whole film serve as one.

We as viewers become advocates for Linklater’s gospel of time in opposition to one of his own characters. By the film’s end we believe in the redemption of time, in the grace of moments moving through us—and moving through us, significantly, in community with others.

One of Linklater’s most memorable scenes is simply of Jesse and Celine in a listening booth playing Kate Bloom’s “Come Here.” They’re in close quarters, so as they listen, they look around awkwardly, look at each other, maybe smile, look away. At one point Jesse seems about to kiss Celine, but turns away when he doesn’t see the right look on her face.

The camera just sits there, forcing us to spend that awkward but charged moment with them. It’s mesmerizing.

It can be so hard to be “present” to life. That’s why I need incarnational art like this, art that can connect me to reality. It’s how God speaks to me. It’s how beauty saves me.

Image above is a still from Boyhood, used in conjunction with this review.