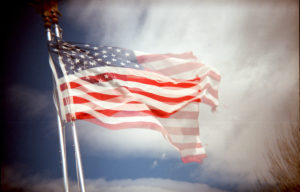 The following appears as the editorial statement in Image issue 89.

Q. Would you mind if I asked you some questions about the current political situation, given the upcoming presidential election and turmoil in Europe?

A. I do mind, as a matter of fact. I have nothing to say about such matters. They’re far too complex. Not to mention depressing. And crazy-making. Besides, I left politics behind years ago to focus on what I’ve got at least a few credentials to talk about. Who are you, anyway?

Q. I’m the part of you that thinks you’re copping out by refusing to tackle political issues, preferring to swan about in your palace of art.

A. That’s a little harsh. As an editor I’ve published a lot of work that takes on serious issues, from poverty and race to immigration and the conflicts in the Middle East.

Q. Perhaps. I’ll even grant that you were an early critic of the culture wars. You’ve poked your head outside the gates from time to time. But come on, take a stand. It’s nuts out there.

A. Nuts is the default condition of humanity. Still, you don’t know what you’re asking. This is hard for me. I’ve been a recovering political junkie for decades. I started watching the nightly news when I was six. I was reading the New York Times well before I hit puberty. As a child in New York I used to beg my father to let me go to the United Nations to watch boring public hearings because it was the closest I could get to witnessing politics at first hand. My first job out of college was at National Review, when Reagan came to power. I could have worked in the Reagan White House. I could have been a guy wearing a bow tie and shouting at people on Fox News.

Q. But you walked away from all that.

A. Yes, and I hurt a few people I cared about and incurred a good deal of guilt and self-questioning. Part of me—I guess I’m talking about you now—whispers in my ear that leaving that world was more like a failure of nerve, like a minor league star who gets to the majors and chokes. On the other hand, I had also witnessed the unbridled arrogance, mendacity, greed, and heartlessness of those in pursuit of power (both masters and sycophants) and it disgusted me. Between that experience and the way literature trained me to see ambiguity, I came to question the ideological certainties I had grown up with. I felt betrayed by my first love. Do you see why I find this hard?

A. No. I stand by that. As they say, it’s a thing. We live in an era dominated by ideology—rigid, abstract systems of thought imposed on reality. (See Robert Musil’s hyper-relevant novel The Man Without Qualities for a chilling insight into this—or Dostoevsky, for that matter.) Ideology makes every aspect of human life subject to what Simone Weil calls “the empire of force.” Aristotle was correct: human beings are by nature political. But politics is the process of debating and adjudicating meanings that largely emerge from other sources: culture, art, religion, customs, and traditions.

Q. Is that what you mean when you say that “culture is upstream from politics”?

A. I’m not in love with that phrase but it conveys a point. So yes, when words like “life,” “choice,” “rights,” and so on are cut off from their concrete sources in human experience they become abstract and oppressive.

Q. You’ve said all this before. Don’t you have anything new to add?

A. The utopian aspect of ideology has so infected our politics that we know no other form of rhetoric than that of the unlimited. With enough technology, know-how, money, political will, what have you, we can make everything infinitely better. When is the last time you heard a candidate for office say that there are inherent limits, trade-offs, and compromises needed to maintain a civil society that’s still in touch with reality? No, there are always more landscapes to frack, always more Wall Street bankers to shake down to make everyone comfortably well off. When’s the last time you heard a policy wonk say that politics is inherently tragic, that it frequently involves the conflict of two goods rather than ideology’s black and white scenarios?

Q. I don’t think tragedy is a concept that has much political traction.

A. Well, how about this: politics is largely the art of escape.

A. Yes. One of the central aims of politics is the avoidance of violence. Think of Sir Thomas More’s words to his daughter about his conflict with Henry VIII in A Man for All Seasons:

God made the angels to show Him splendor, as He made animals for innocence and plants for their simplicity. But Man He made to serve Him wittily, in the tangle of his mind. If He suffers us to come to such a case that there is no escaping, then we may stand to our tackle as best we can, and, yes, Meg, then we can clamor like champions, if we have the spittle for it. But it’s God’s part, not our own, to bring ourselves to such a pass. Our natural business lies in escaping.

A. On the contrary, it’s a form of love—of peace-making. It is an admission that power is not the last word. It’s a call to sacrifice and to trust.

Q. Now you’re waxing mystical. Just answer me this: are you still a conservative?

A. Yes. No. Maybe. Look, the older I get the more I see truth on both sides of the political fence. And don’t say I’m getting soft, because I’m crankier than ever. Conservatives over the last half century have been catastrophically wrong about such central issues as civil rights, the environment, and the consequences of playing world policeman by intervening with inexcusable cultural and historical insensitivity in the affairs of other nations. They’ve lied to themselves about the effect capitalism has on the values they tout as sacred: community, tradition, mediating institutions. Capitalism has been the great universal solvent that has broken bonds that offer people meaning and solidarity.

Q. So you’re a liberal now.

A. No. Yes. I don’t know. Liberals have been catastrophically wrong about the ability of the state to solve human problems; they’ve forgotten the principle of subsidiarity, the idea that “matters ought to be handled by the smallest, lowest, or least centralized competent authority.” Liberals have largely bought into capitalism as well, just in a different way. They are so invested in expressive individualism that they are in danger of becoming oppressors of any minority that doesn’t agree with their definition of human flourishing. In many ways they’re the new Puritans, which is ironic, given the moralistic antics of fundamentalist Christians over the past half century.

Q. Aren’t these problems one reason why populism is on the rise?

A. Of course, but the populist demagogues pander to the same cult of the “unlimited”—unlimited American might or unlimited social engineering—so in the end the real division isn’t between elites and populists. Listen, so much of the worst in political life stems from the fear of loss—we fear losing our security, our identity, our comforts. We fear the Other and close ranks. As I said before, we have no public language for sacrifice and trust and accommodation, only victory and defeat. We’ve lost the ability to imagine the lives of others.

Q. So that’s why you think art is important.

A. In the Washington Post Leon Wieseltier has just spoken to this:

Ethical principles are most commonly ascribed to the operations of reason, but we need to remind ourselves of the role of the imagination in moral action. Without the imagination, we would act only against wrongs that we ourselves have endured. We would be prisoners of our experience—which is to say, the experience of people less lucky than ourselves would be incomprehensible to us…. [T]he old dichotomy between art and ethics, between the beautiful and the good, is not all we need to know about the place of art in life. Art, high and low, may play an indispensable role in the formation of virtue. One of the ways in which it does so is by picturing pain.

Q. Now there’s a hot item for a party platform.

A. Who’s the cynic now? The imagination is central to a healthy political life. Without the ways artists, filmmakers, and others depicted the dangers of nuclear destruction, we wouldn’t have backed off from the brink of Mutually Assured Destruction. The same thing is happening now with global warming. But at a deeper level art takes us inside the humanity of the Other—and hence what we have in common. Art reminds us of the ambiguity of our motivations and the unexpected consequences of our actions. It tempers our expectations, helps us to live within our limitations and accept them with grace. Art also helps connect us to our past, to the history that we Americans at least keep thinking we can leave behind in our new order of the ages.

Q. You may have been right to walk away from politics.

A. I thought you’d eventually come around.

Q. So who are you going to vote for in the US presidential election? And should Britain have left the European Union?

A. It’s been great talking with you. Don’t lose hope. T.S. Eliot once said there are no lost causes because there are no gained causes. We have to remain outraged by injustice, tireless in our fight for justice, and yet find some sort of peace along the way—or we’ll either go mad or tear each other to pieces. I admit that this sort of peace may be the variety that “passes all understanding.” But I believe we’ve been offered that peace and that it’s a very different thing from complacency. It’s the very ground of our being, the foundation upon which we stand as we fight. We have to learn how to live in the “in-between”—between the City of Man and the City of God, between is and ought. It’s a vexing, messy, anxious place to inhabit, but it’s our home. Without it, we’re homeless and unmoored. To quote Eliot again, we have to be “still and still moving.”

Image above by Pat Hawks, used with permission under a Creative Commons license.