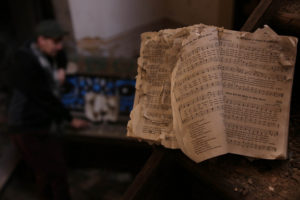 In a world in which it seems that just about everything seems to be complained about online—bitch, bitch, bitch, moan, moan, moan—ad infinitum, here’s a little beef I’d like to proffer, that I don’t recall having seen anywhere yet:

Mind you, I’m not complaining about the notion of grace itself, God’s unmerited favor given in the gift of his son to save us from our sins—the distinctive Christian soteriology. It is not, therefore, the theological concept I doubt—though as an Eastern Orthodox Christian, I’m probably a bigger fan of the book of James than a lot of my Protestant brethren.

I don’t even have an issue with the hymn’s composer, John Newton, that poor former British slave trader, who was haunted by the dehumanizing work he had pursued, though not enough to leave it for decades. It was good for him to repent, and write against slavery. I am glad he found forgiveness, despite the horror he perpetuated. (I believe that forgiveness can, indeed, be received. Even for horrendous evils.)

It’s the hymn that’s the problem.

Or, rather, what the hymn has become: For all my life, “Amazing Grace” has been a kind of self-proclaimed identity anthem of the putative “America as Christian Nation.” Even in the increasingly secular now, the fastest way to conjure up the notion of “Christianity” is for somebody, somewhere, to launch into the plaintive singsong of “Amazing Grace.”

It’s right up there with the twenty-third Psalm, John 3:16, and 1 Corinthians 13 (for the bonus round) in the annals of Christian Stuff People Actually Know.

“Amazing Grace” is a cultural trope we all know, especially those of us descended from Anglo-Saxon roots. The redneck version is the beauty queen with mascara running down her cheeks.

And there’s a certain kind of WASP—or aspirational WASP—in the South who always wants to have “Amazing Grace” blasted away on whingeing bagpipes at his or her funeral. Rich white liberals from the Mississippi Delta, on the other hand, want a black blues singer to sing it for them—perhaps at a Gospel brunch.

The song is equally at home being sung with “This Land is Your Land,” or Lee Greenwood’s “God Bless the U.S.A.”

Hell, it doesn’t even have to represent Christianity, for that matter—just things that are vaguely “spiritual.” “Amazing Grace” is the default choice for public funerals in film clips on the 11 o’clock news, sports extravaganzas, and educational testimonies by those who have beaten the odds to have achieved something, despite all.

It is apparently secular enough, in this day and age, that nobody thinks of it as a violation of the Separation of Church and State.

Clearly, “Amazing Grace” is working for a lot of people. So how come it is driving me crazy?

What it is, I think, is the way that the hymn’s creedal specificity—its solemn recognition of the gravity of unmerited salvation—has in the American scene been transmogrified into a big fat “get out of jail free” card, robbed of its content: We have been so frigging blessed we are going to be smug about it.

It’s a way of immanentizing the eschaton without even attempting the work of it.

Jesus may have “done it all,” but that doesn’t let the American people off the hook, exempting them from doing anything.

Said another way, it’s the same old appeal to John Winthrop’s call for America to be a “city on the hill”—never mind the fact that the dictum is a actually a warning, not showy praise.

If we need a secular anthem, a balm for the vicissitudes of public life, then I vote we appeal to Brother Bob Marley and select “Three Little Birds”—a far greater comfort in my book—or maybe even “You Can’t Always Get What You Want.” Which, you may recall, was itself a funeral anthem in the 1983 film The Big Chill.

If we are talking about something Christian, the annals of Christian hymnography contain a wealth of untold treasures across all of the traditions, so why we stick with the hymnographic equivalent of Boston’s “More Than a Feeling”—which somewhere, at every possible moment, is playing on Classic Rock radio—is beyond me.

I can only think of one thing that is almost as self-congratulatory and bad, a hymn in the Catholic tradition called “On Eagles’ Wings” that sounds as bad as if you mixed Jim Croce with Dion and the Belmonts.

And yet, the spiritual consolation provided by these awful hymns is nonetheless real. And you don’t have to remind me of Jesus’s words—his yoke is easy and the burden light.

Maybe we can take “Amazing Grace” and wash it off with acid first, so that we once again experience the shock of it, anew.

Image above by Paul Sableman, used with permission under a Creative Commons license.