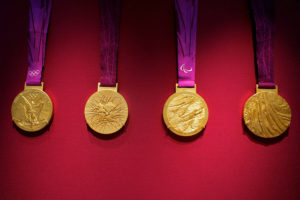 Here I sit, watching the Olympics again; it hooks me every time. I always say I like the winter ones better because there aren’t so many sports to keep track of, but when I start watching the summer ones, they suck me in too. In the winter, the downhill racing and the extreme sports I can’t remember the name of (what do you call the thing where they fly down a slope and do flips in the air?) grab my attention.

In the summer, I like the swimming and the diving and the track and the gymnastics and the volleyball and pretty much whatever else is on at any given time. The other day I watched something that involved a net and a ball but was like nothing else that I’ve even seen.

I would never watch some of these sports outside of this context, but every couple of years, I do.

I even begin to know the names of the stars in a particular field, following their rivalries and personal stories. Once the games are over, I’ll probably forget the whole business. Nevertheless, I’m a groupie for the time being.

As a connoisseur of the Olympic athlete, I can make some observations: gymnasts, by and large, seem intensely sad, worried, inconsolable people. There is a joylessness to them that can almost ruin the beauty of what they do, consumed as they are with their raw score. They don’t even seem to be all that happy when they win. Exceptions exist—and I think the popularity of the gymnasts who can break that mold is proportionately higher.

Swimmers, on the other hand, are a wild and gleeful lot. I used to run around with some competitive swimmers and found them to be party-goers who could shame the best of them and pranksters on the most juvenile of levels. They’re also the most likely to know the words to “The Star Spangled Banner.”

Runners can fool you. You’d think they were more like gymnasts in their demeanor if judged at the beginning of a race—all frowns and stares and manic movements. But afterwards, they’re as content in their victories as hogs in a wallow. They have the most mysterious lives outside the games too; they’re the most likely to be professionals in the sport (if you don’t count basketball and tennis and that kind of thing—which is hardly fair), but whoever heard of a professional meet and how do you go to one even if you have?

For the longest time, I envied those who got to stand on the podium, medal clad and glory bound. The celebrity they gained as a national hero for triumphing in their sport was something anyone would aspire to achieve. But now that I know about the kind of single-minded focus and complete sacrifice required of such people, I don’t know if I’d want their success (luckily I was never talented enough in any sport to find out).

Of course, this could be said of any number of accomplishments. Actors, musicians, and artists are famous for putting everything into their art.

I once had a man tell me, proudly, that he was a better writer than he was a father or husband. I didn’t know what to say to that, because though I knew he meant that he follows in a long line of men who put their artistic desire above their personal life, I couldn’t congratulate him. It may be that he could not have been as good as he was had he shared any of the time and effort that went into his work; perhaps it may be that the effect his work has had in the world would recommend the wisdom of such an exclusionary life. But what were the opinions of his wife and children?

I think of the Spartans, whose lives of martial service overwhelmed every aspect of their culture. Their great warriors are unparalleled to this day; there was no middle ground to their devotion. Boys were taken from home early, starved, beaten, and trained into fighting machines. Embarking upon battle, they were to return victorious, carrying their shields, or dead and carried upon the shields of their surviving comrades: “With this or on this,” said the Spartan mothers, as they presented their son’s with the shields. The whole family was in on the business.

At the Battle of Thermopylae, where the 300 warriors of Sparta, vastly outnumbered, died in service of their ideal, the following phrase is said to have memorialized their tomb:

Go tell the Spartans
stranger passing by
that here, obedient to their laws, we lie.

There are always those who will pay the ultimate price for a solitary objective; the question is whether the objective is metaphysically significant enough to warrant such a cost. Perhaps; perhaps not; but the interrogative must be answered by any who play the game.

Image above by Paul Hudson, used with permission under a Creative Commons license.