This interview originally appeared as a web-exclusive feature for Image issue 63. 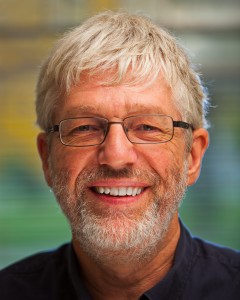 John Terpstra has been in church since before he was born. “I have heard everything there is to say about the place, for and against; both its necessity and its redundancy. Have felt it all, in my bones,” he writes.

Issue 63 of Image includes his essay about church, titled “Skin Boat: Acts of Faith and Other Navigations.” Part of a book-length work of the same name now out from Gaspereau Press, the essay interweaves images from Terpstra’s experiences as a poet, woodworker, and lifelong pew-sitter, as well as language from spirituals, the Old Testament, Old English literature, and conversations about church with his wife, friends, and neighbors.

I asked him about the nonfiction he’s been writing lately, and about how this book came to be written.

Mary Kenagy Mitchell for Image: You write both poetry and nonfiction, and you’ve said that at different times in your life, one muse or the other will get the upper hand. What are the things that nonfiction allows you to do that poetry doesn’t, and vice versa?

John Terpstra: I came to nonfiction after having published several books of poetry, and the impulse behind that first work was largely a poetic one: a particular landscape was holding me in thrall and it became an inner necessity to pursue and investigate it. But the landscape did not become a subject that I then researched in a typical nonfiction fashion—although I did that too. It began as and remained primarily a matter of spirit and heart.

The nonfiction was really only an extension of the poetry in terms of style as well. More than one listener has commented at my public readings that they cannot tell if I am reading one or the other, and in some ways I myself make no distinction between the two. It’s writing, and it is in my voice.

Having said that, what I enjoy about nonfiction is the larger canvas, the longer thread that I can follow as it winds itself who knows where. It also gives me more of an excuse to stay home in the morning, because it feels more like work, plain and simple. And its rewards are often more immediate. I can almost be guaranteed to move a few inches forward on a nonfiction project if I spend a few hours with it, even if the next day I find myself moving a few or more inches back. In writing poetry there are no such guarantees.

Nonfiction also comes with a built-in incentive: more people read it than read poetry. It has more currency than poetry. For a writer, this translates into the possibility of a larger audience.

What poetry brings to the table, on the other hand, is an existential immediacy. I am thinking of public readings when I say this. They are the forum for poetry that I am most comfortable with, what I most often write for, and where the poetic spirit shines with a singular brightness.

Image: Your essay in the new issue of Image includes many disparate strands, but reads as something fluid and seamless. How did this piece find its structure?

JT: If the essay in the new issue of Image reads fluidly and feels seamless to the reader, I am hugely gratified. Isn’t this what every writer wishes to accomplish, to make the finished piece seem inevitable, as though it simply issued forth?

Part of the fun of the kind of writing that I’m engaged in, which is made up of many short pieces, is that it almost feels like a kind of harvest, like plucking fruit from a tree. In the initial phases of what became Skin Boat, I wrote whatever came to mind, whatever appeared next on the imaginative horizon, whatever the previous bit of writing suggested. It was a case of allowing the intuition to have its hand, and of trusting its next step, however unusual or ludicrous that step might appear, and trying not to impose a direction on the writing. This did not necessarily come naturally to me. I prefer to know where I’m going.

I use the word “fun” advisedly. The process was and is fun when it isn’t tipping my fruit ladder, or tying me into knots. Much work goes into any finished piece of art, and much went into the shaping of the many individual parts of this book, into the shaping of the book itself. Its basic structure, however, remains for me, a testament to how a person can indeed trust their intuition.

Image: In the essay, you touch on your work as a carpenter, and the parallels between making, say, a bureau and making a poem. Has woodworking made you a different kind of poet than you’d be otherwise? Does being a poet influence how you work with wood?

JT: Woodworking offers an even better guarantee than nonfiction writing that if you spend a few hours at it you will have something tangible to show for your efforts.

Woodworking allows me to move, with my body, and to do something, with my hands. My hands enjoy their motor skills, the physical manipulation, the working with material and tools (hand or electric), shaping and putting things together. At times it seems like a kind of conjuring. I wave my arms around, and something that did not previously exist in the world now does. On a good day, the work is satisfying physically, intellectually, and spiritually, though it must be added that much drudgery accompanies any woodworking project, as well as ear-damaging noise and lung-clogging sawdust.

It makes me a poet who wants to be involved in the daily commerce of the world. I have generally resisted making a parallel between woodworking and writing poetry or prose, simply because it seems too cute by half, but both do involve a shaping and putting-together of parts that do not look alike and do not necessarily appear as though together they will make a whole.

Image: In this essay, and in other work of yours that I’ve read, your wife is an important figure, someone you’re constantly in conversation with, but she remains mysterious and in the background. It’s clear that she’s smart, but mostly her personality is implied rather than stated. Is she involved in your writing process at any point?

JT: In writing The Boys, which was a book about her family, I gave my wife veto power over whatever I wrote. That was the closest involvement she has had in the process in a long time. We figured out years ago that if she reads and comments directly on my writing it puts us into a relation with each other that feels neither comfortable nor natural to us, and so we don’t do it.

At the same time, and in other ways, she is so deeply involved as to be inseparable from the writing. We experience many of the same things, and we talk about them; we share life together and much of my writing emerges from this life. I try to make meaning from all the disparate elements that are before me. It’s inevitable, I suppose, that she becomes a character in that making. Ultimately in this process, it makes no difference who either of us are as individuals, even as it makes all the difference in the world.

I do not tell personal stories for their own sake. I use my own, and her experience in order to gain entry and open into something bigger. It’s my mode. I use these elements because that is what’s given to me to write. I may sometimes wish this were otherwise, but she, I, and many of those closest to us have all had to reconcile ourselves to the fact that we may very likely turn up on the pages that I produce. We’re all at the same party.

Image: How do you know when a piece of writing is finished?

JT: It seems to me that it is easier to make sure, or be sure, that a poem is completely finished than a piece of prose. I can usually tell that a poem is done when I write yet another draft and no words are crossed out or changed, or when I read it aloud to an audience and no word jars in my ears or causes me to cringe inwardly.

The process is a bit dicier with prose. There came a point in the writing and later editing of Skin Boat where I realized that the changes I was making to the text were actually upsetting the work as a whole, and making subtle changes to the overall tone. I was fiddling around with something which, for better or worse, was done.

That’s the catch: the book was done, and I would have to live with whatever imperfections I perceived it might still have. My nonfiction writing is, in a sense, continuous from one book to the next, and I think that perhaps I had already, without knowing it, begun the next book. At that point I understood, again, why someone has said that a book is not so much finished as abandoned.

John Terpstra is the author of eight books of poetry, most recently Two or Three Guitars: Selected Poems. His books of nonfiction include: Falling into Place; The Boys, or Waiting for the Electrician’s Daughter; and the forthcoming Skin Boat: Acts of Faith and Other Navigations, from which the essay printed here was taken. All are published by Gaspereau Press. He lives in Hamilton, Ontario, where he works as a writer, carpenter, and cabinetmaker.