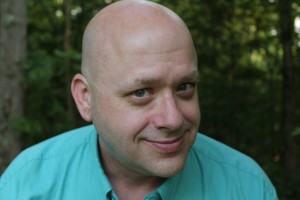 Mary Kenagy Mitchell for Image: You have a novel titled Dogs of God, and in your new story in Image, “The World, the Flesh, and the Devil,” a feral dog is one of the two main characters. What do dogs have to teach us?

Pinckney Benedict: Dogs give us an excellent metaphor for our own relationship to God: We can see, from our human perspective, how limited their understanding is. And sometimes they make terrible blunders—which we could prevent them from making, if they would listen to us—because they have relatively short horizons. And sometimes they do astonishingly well, by our lights, on very little information and with no moral boundaries.

We’re something like that—magnified to the nth degree, of course—in relation to God. The way I love my dog, even though he’s a spastic moron who eats things that no one or nothing should eat, and then he comes home and vomits on my carpet: that, multiplied infinitely, is how God sees me and also how he loves me. So I can be aware of how limited and shameful I am, and not want to simply burst into flames with humiliation. What I want for my dog is what God wants for me, times one billion.

Image: The story takes more than one unexpected turn. Can you talk a little about the process of writing it? How much did you know about what would happen when you started writing? Which pieces came into your mind first? How did the thing take shape?

PB: The story combines a number of elements I’ve wanted to write about for a long time. Like most of my stories, it’s a hodgepodge of bits that have become stuck in my psyche one way or another and that need to work themselves out. I’m a magpie and a great believer in the “ecstasy of influence”: that we all recycle, and we can recycle most effectively those things that obsess us and fill us with a delight (though it’s often uneasy delight). Typically, I start with one image that’s important to me and it leads to other images, many of them quite unanticipated.

The stained-glass window is the first image I started with, and it is real: I became obsessed with it as a boy in a an extremely strict single-sex prep school very far from my home in West Virginia, and not a day passes that I don’t think of it. I will never understand it fully, will never fathom the depth of its attraction for me. I wrote the passage about the birds of paradise first, and even made a short film using it as the narration, and the stained-glass window provided the visuals.

I’m also quite an aviation buff, particularly military aviation; and when I was preparing this story, I’d been having long conversations with an older friend who was a Phantom pilot in Vietnam, which is where a lot of those details came from. I also spent a lot of time on a sophisticated flight simulator, learning to fly the Phantom, less because it was necessary to the fiction than because it was a blast.

The “gray dogs” are the Appalachian version of the antagonists in a Kipling story (one of the Mowgli tales) I’ve long loved called “Red Dog.” There are large packs of feral hounds that stalk the mountains where I grew up, so they’re not too far-fetched, I don’t think.

And I’ve wanted for some time to write—and will write again—about the leprosarium. I don’t know that there was such a one in the Appalachians, but there used to be—and not so very long ago, as the last one closed less than a generation past—a network of deeply isolated leprosaria (if that’s the correct plural) in rural areas of the US. They were run much like minimum-security prisons, and people—once diagnosed—spent their entire lives within the walls.

Finally, the “silver man” is another nod to Kipling. When I knew I wanted to have a leper—or perhaps the ghost of a leper—in my story, I thought of the best fictional leper I know, and that’s the Silver Man from Kipling’s “Mark of the Beast.”

Wow! That’s a lot of stuff. The story is maybe a bit overpopulated, but I’d rather make that error than have it be too quiet.

Image: This story seems like a really good illustration of the theory that fiction writers write stories because they want to sort through things that can’t be sorted through in any other form. In other words, this couldn’t have been an essay. What kind of mental sorting led to this?

PB: I’ve maybe touched on this a little bit above. I can’t say in what way precisely all of these images are related. I can only say that, for me, quite powerfully and organically, one of them led straight into the next. When I’m writing, this sort of succession of images and events usually seems inevitable. I am puzzled by the world, though not much troubled by it, generally speaking.

The forest—the vegetable kingdom—awes me without frightening me. It doesn’t care in the least about me, and I love that. It doesn’t want me to do anything. It doesn’t even know I exist. I wanted to show a fellow who was entirely out of his element encountering the sorts of things that I encounter on a frequent basis. I wanted to see with fresh eyes things that I love and enjoy and am thrilled by.

Image: You succeed in getting us to stay with you through a couple of really wild turns, and for me that was part of the joy and wonder of reading the story. When you make a big leap—say, move us into the consciousness of a dog, or, have a supernatural being appear and change the course of the action—you risk that we won’t be able to suspend our disbelief and you’ll lose us. When you were working, were you conscious of that risk? Of doing things to help us stay with you?

PB: I’m glad you were able to stay with the story. Probably not everybody will be as generous in their reading as you have been. Principally, what I try to do in all my work, both the more “realist” stories and stories that incorporate elements of the impossible, is to stay in scene at almost all times, and deeply embedded in the consciousness of the protagonist: to make the elements of the story as specific and detailed as they can be, to make you as the reader able to (even unable not to, if I can manage it) see them on the mind’s stage, or movie screen.

If you experience these elements intensely enough in your own imagination, if you “see” them, your intellect will—this is my theory, at least—be powerless to convince you that they cannot possibly exist, that these events could not possibly occur.

That’s the principal advice I give my students: Write in scene, with as little summary and interpretation as possible. Give the reader an experience, any kind of experience. Immerse the reader in the rich detail of the world. In that way, any world you create will become real. The reader makes it so. The reader becomes implicated in the creation of the world, complicit with the writer. It’s the best sort of bond with audience that a writer can hope for, but it demands a great deal of trust on both sides.

Image: The title, “The World, the Flesh, and the Devil,” sounds like part of an old folk saying or hymn. How does it connect to the events of the story?

PB: It’s a phrase from Colossians that defines the three principal enemies of the spirit; secular events and interests, the unregenerate body, and (of course) Satan. It seemed to me when I finished the story that it had touched on all of these elements—though I’m not as clear on them as Paul is (or Martin Luther, for instance). I really like the world (much of it) and am also partial to the flesh; and the “devil” of the story is the great voice of the forest, the thing that we hear calling and that terrifies us and to which we are nonetheless inexorably drawn. I’m probably a heretic. Don’t tell anybody.

Image: In the penultimate moments of the story, you go to great lengths to show us the strangeness of God, and how God can speak to us. This happens in a way that is totally bizarre but also feels true and organic to the story. Does this story have a theology?

PB: The story’s theology, such as it, is precisely what you outline: that God is exceedingly strange (or that we are strange but so self-absorbed that we take God’s nature for strangeness) and that he didn’t stop speaking to men centuries ago. That the assumptions we tend to make—about the world, about ourselves, and about the “supernatural” (which is entirely natural)—are utterly wrong, and probably wronger the more convinced of them we conceive ourselves to be.

Image: Your MySpace page says you want “to be the other Chekhov.” Why is that?

PB: I’ve contributed an essay on witchcraft (my own encounters with witchcraft, feminine beauty as magic) to an anthology just put out by New American Press (edited by Okla Elliott and Kyle Minor) entitled The Other Chekhov. The volume consists of stories, each with an introductory piece by a contemporary writer, that—as opposed to the stories of the subtle and the quotidian, for which he is mostly known and of which, of course, he is the absolute master—showcase the bizarre, the violent (including a shark attack!), and the supernatural. That’s the “other Chekhov” I’d like to be: the one who wrote those wild stories.

Pinckney Benedict has published three collections of short fiction and a novel. His stories have appeared in magazines including Esquire, Zoetrope: All-Story, StoryQuarterly, and Ontario Review and been anthologized in the O. Henry Award series, New Stories from the South, the Pushcart Prize series, and the Oxford Book of American Short Stories. He serves as a professor in the English Department at Southern Illinois University in Carbondale, Illinois.

Mary Kenagy Mitchell is the managing editor of Image.