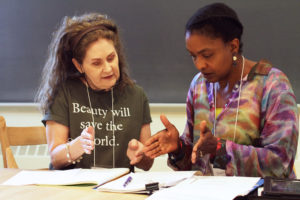 This story has many beginnings.

It begins with the great state of Ohio where I’d made my home for eight years. We lived in Columbus, and on late nights my husband and I would walk its city streets during summers so thick you could wade through them, cicada choruses surging like electric currents through the air, and we would talk at length about how I both dreaded and longed for the day we might leave.

It begins with the persistent loneliness that can make up the writing life, often paired with persistent doubt.

It begins with what I had dubbed the Season of Closed Doors, a season that seemed to go on and on, almost laughably—a sobering reminder that when you choose something, you are choosing it at the exclusion of all else and that the possibilities were never as endless as they seemed. Or with my fantasies about a writing mentor, or the feeling that I was finally in the right project, one that might someday, actually, concretely, become a real first “book.”

Or perhaps it best begins with Greg Wolfe’s phone call one April afternoon when he extended the offer of the pinch-me-I-must-be-dreaming Milton Fellowship, and I took it.

During a reading she gave last summer at the SPU MFA’s residency, Lauren Winner explained that a true gift, by definition, is something that cannot be replicated or reciprocated by the receiver of the gift. If that is the case, the Milton Fellowship is one of the truest gifts I’ve ever received.

As we enter into this culturally mandated season of thankfulness and gift giving, the complicated practice of giving and receiving is readily apparent. It is difficult to give without expectation of how the gift will be received or used; it is difficult to receive without an attempt at reciprocation in order to keep things balanced—similar to I’ll get the check next time.

Too often, we want to be in control, and the whole experience can become a carefully calculated transaction rather than something resembling altruism, or grace.

I’ve never been good at receiving gifts because I tend to feel that I’m at the mercy of the giver. Like when my father gave me an enormous sequined peacock pillowcase that I’ll never know what to do with.

The greater the gift, the more I feel as though I’m on the hook, and with the Milton Fellowship, in some ways I was. I wrote daily. I re-envisioned my project. I produced new essays and revised old ones, and tried to be a better teacher with each class I taught. I will prove that their investment was not in vain, I told myself. (Notice my vocabulary there: investment.)

Despite my infant daughter and meeting her needs—she was one month old when the fellowship began—despite the fact that I knew I would write more pages that would be discarded than ones I would keep, I was determined to prove I was worthy of such a gift. I thought this was possible.

However, as the year progressed, it became clear that I was simply at the mercy of the Fellowship. It was too great and true a gift, one in which the most appropriate response was to submit—to continue to work, yes, but to work while knowing this was something I could never reciprocate. What I received would always far outweigh anything I created.

I simultaneously was and wasn’t worthy—therein lay the beauty of the arrangement. And then I began to see how this act of giving and receiving reveals something about my fundamental resistance to grace and the edges of a grace so radical I’m still only learning to imagine it.

While I was out walking last week, I pushed the stroller carrying my sleeping daughter over the crest of a hill. I was breathing hard, enjoying the feel of cold on my face, when I observed a mirror image of two figures bundled against the wind inching toward us on the same stretch of sidewalk. They, too, were on a walk.

As we approached one another, I saw that it was an elderly woman who was pushing a much more elderly woman laden with blankets. They were moving slowly as leaves skittered across our path, and the woman being pushed appeared to be particularly brittle. Rather than passing them up close, my impulse was to cut across the street prematurely, because it felt too metaphorical for my taste—as though in the blink of a season, my elderly daughter would soon be pushing my brittle self through the blustery afternoon because I could not enter it on my own.

But if there is anything I’m sure of, it’s that we need each other’s gifts more than we think we do, however imperfect the giving and receiving may be, and we need to encounter each other’s visions more often than we seek them out, particularly when we feel we’ve reached the end of possibilities.

Now I work for SPU’s MFA program and my office is tucked into the small but mighty Image house—they will not be rid of me yet!—with its teeming stacks of books and a staff so smart, motivated, and creative that I feel buoyed simply by their presence.

The work done by the Image team creates innumerable gifts. It is a gifting enterprise. There are the obvious gifts of the journal, the Glen, the fellowships, this blog, and so on. But Image offers another gift intrinsic to all the others. Over the past year, I’ve heard people refer to Image as one of the first spaces that allowed them to share the work that they were most passionate about, but more importantly, to connect with others wrestling with their faith through art and vice versa.

In other words, Image—by the hand of its faithful staff and meaningful vision—has created opportunities for interdependence. In a culture that seems obsessed with the ruse of independence, this is a profound, true gift. And it is one without end.

Camellia Freeman was Image’s 2015-16 Milton Fellow, and is now the Program Coordinator of the Seattle Pacific University Low-Residency MFA in Creative Writing. She received her MFA in Creative Writing from the Ohio State University, and her work has appeared in Crazyhorse, Image, Indiana Review, and elsewhere. She is a recipient of Ohio Arts Council Individual Excellence Award and OAC summer residency in Provincetown, MA.