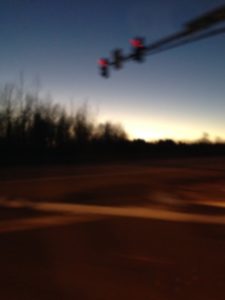 When I visit my family in northern Minnesota, I find myself on the same roads I’ve known—back and forth—since I was a child. Often I ride with others because I can’t orient, even in my small town and the outskirts made of barely-there townships and roads that veer only toward themselves. I think of small pathways on Midway Road, and I look for the town hall, for the church, for the dilapidated gray house with scorch marks at the roof. The churning root beer float of the St. Louis River to the south.

I gave up my car last year, though I still love the way the air and light changes on a drive, the way that movement and change of scene feels like prayer. Like close prayer, as if God is in the ditch or the jack pines, a new side of God available when you move a certain way or enter a different terrain.

I cry on cars and trains and planes, travel giving my soul a chance to slosh its drink and overflow. Being between home and a destination—in a between-place—unleashes the fear I have of myself or my home changing so much that we’re unable to find or recognize one another. I fear the same thing about God, that one day I’ll not be able to locate him. It’s a fear that drives me to look for him, map him, everywhere and with urgency.

At dusk: a shadow and a sadness. I ride down Midway, road so elongated that I don’t notice the cliffs—basalt, granite, eons—until someone points them out. The air is quiet and full. All that forest. Lives lived behind the trees before space was something to be conserved, used up, and houses grew nearer to the road. Before driveways became efficient and less a chance to consider your journey, your endpoint. In the afternoon, you’ll stop for the same train at three different crossings.

As children and teens, my sister and cousins and I drove down Midway to the mall, to the great lake. We didn’t go very many places. We were scared all the time; people we loved were in danger, and there was nothing for children to do except to go away, away, and then toward, toward.

Home was desired and dreaded. Sometimes you can’t separate your ghosts from your descending shadows, your lavender air. We were scared all the time. Sometimes, fear is a presence that visits, strange comfort. Good company. Sometimes fear is an invocation: God to a ditch, God to the jack pines. We drove and made ghosts of ourselves all down Midway Road, looked out the windows for signs.

An old legend: you’ll dream vividly if you sleep where you can hear a train. It sounds true, doesn’t it, a piece of truth in it? One summer, I lived in a house where six people had died, and I dreamed every night all night, and I didn’t know if I dreamed because of ghosts, or because trains in the river valley passed by, or because the trains came from the east, where my home was, and I knew by their mourning that trains and homes are always changing shape.

I heard the train on its way to the paper mill every night as a child; it taught me to be sad, to know that sadness could be a presence that visits rather than a cloud arising from within. Sadness is a road, driven over and over, always unchanged and never the same.

The 113 elders who had to leave the tuberculosis sanatorium turned nursing home when it closed in 2002. Leaving the woods is a kind of ghost-making. Something stays behind to remember you to the space or to yourself should you return.

The language created by the eight homesteading families—four Finnish, four Swedish—in Midway Township, as they took words from their countries and molded them to how the new air and earth asked them to converse.

The Anishinaabe who hunted the deer that leap into the road; the Dakota who were the first to notice the good air cupped by the hills. A settler looks at something over and over as she moves through, a world that she’s obliterated. A settler strains at all the things she will never see.

I take photos out the window as my aunt drives. It’s late afternoon at the end of November and becoming very dark. The sky was gray all day, but now that both snow and dark are falling with their burned and glittering smells, pink and tangerine hem the edges.

I like this more than anything: what’s seen through the window of a moving car. The space between vision and glass and between glass and ditch and what’s beyond. It feels like I can see more or see through, when I watch the illusion of moving world.

When you drive, the eyes move rapidly as they misinterpret your too-quick movement as the world going headlong, and they struggle to keep up. But the brain thankfully removes the motion blur of streaking lines connecting birch after spruce after pine and bleeding them into the sun, into the black of earth we can capture in photos.

Snow against the windshield, snow deep-ended from invisible horizon as if we’re lying under a funnel of it. Snow receding and charging and simply suspended in all trajectories at once.

The photos show what my brain won’t allow my eyes, connections between poplar and sky and ditch and succumbing-to-ditch shoulder and asphalt worn bare into gravel into brilliant horizontal cascade. The image changes too fast as I look through the window, and my camera catches it morphing through time and neighbor.

There are no moments, only composites of moments, everything forming layers atop itself. I think I know a place so well that it takes some bad photos to remind me that I am cupped by hills and ghosts and gods and God; held be journeys many times over and heartsickness and all the things I think I see.