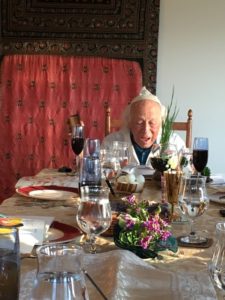 I am writing this essay on the fortieth anniversary of my father’s death, so my immediate thought about Martin Luther King, Jr. this morning is of those four precious small children left fatherless on April 4, 1968.

There are two things I’m thinking about fathers: The nimbus of their influence continues to fall across your life, no matter how early they’re taken from you. Whether it’s shimmering or shadowy depends upon them.

When those fathers are departed, you have to go in search elsewhere for substitutes to replace them. There’s an ancient tradition of spiritual/intellectual fatherhood: Socrates taught Plato, and Plato taught Aristotle, goes the saying.

And this is where I have to jump in to say this: There was not much said about Martin Luther King, Jr. when I was growing up in Mississippi in the 1970s and 80s. It’s hard to explain this to people outside the South, but this was true even among folks who were racial moderates, like my parents, who supported public school desegregation but were otherwise limited by their time and place.

Of course, whole volumes of history regarding the Civil Rights movement were just not mentioned among white people when I was growing up—even when they took place in near walking distance from where we lived. All I recall was my mother’s mention that a country church was “where the Freedom Riders” stopped for the night, and that my oldest sister—already, things were changing—had asked to be driven out to see them arrive.

It would be later that I would learn about the courage of Dr. King, the careful layers of political organization it took to steer the movement for the long haul, and the triumph of King’s faith over many, maybe most, Americans’ faithful doubt.

It would be later that I would hear the emphasis of some of my fellow Southerners on the FBI revelations about Dr. King’s personal life, as if those indiscretions undercut his achievements. (What, after all, did they think about King David?)

It wasn’t until I acquired a new intellectual “father” of my own that I was able to begin to bridge the sad disjunction between what I’d been taught about my history and region, and the levels of unspoken suffering behind it. And what, as a person of faith, one can do in response.

Rabbi Everett Eugene Gendler was the school rabbi of the boarding school I went north in ninth grade to attend. And he was not merely what we would now call “progressive”—he had been deeply involved in the Civil Rights and peace movements, and would continue to be so. He’d lived with Rosa Parks and other activists on a peace commune in Monteagle, Tennessee. He would become famous for his efforts in helping to steer distinctly Jewish movements in environmentalism, and later, gay rights.

Later, once I’d turned to liturgical Christianity and mysticism—along with an interest in labor rights—he told me that Dorothy Day herself had written him a note congratulating him on his first child.

He was the kind of person that the Town Fathers in my hometown (but not my father) would have likely called a “troublemaker”—like Martin Luther King himself. He had been appointed in part to rectify the school’s history of quotas for Jewish students—so he knew something about breaking down barriers.

And I came to know him closely, over my four years at the school: He taught my Nonwestern Religions class in tenth grade, and because he would not hold class on the every-other-Saturday that they were scheduled, he brought breakfast to the early morning Thursday makeup classes we had when the rest of the school would sleep in.

Saturday was Shabbat, after all, and his stubbornness on this point impressed me—who had already imbibed the importance of Biblical obedience.

His daughter became a good friend of mine, and even came to spend a week in Yazoo City with me in the summer of 1984. The first Passover Seder I ever attended, with real cups of wine, was sponsored by the Jewish Student Union in a building that had once been a fraternity house in the Poppy Bush era.

Never mind that I was an evangelical Christian, or politically pretty conservative in those days: Rabbi Gendler could disagree, but he never demeaned. And it helped, as well, that he clearly didn’t care what you thought of him. He was going to bust through the world in his brown poncho and crocheted burnt orange yarmulke radiating joy.

I learned from him first what I later learned about Martin Luther King, Jr.: the value of sheer, calm persistence in moving forward in the spiritual task—even if the intermediate outcome would be, as it was for Martin, to end in disaster. And that faithfulness to the spiritual task was always the basis of effective social action.

I learned from them both the value of ongoingness.

It did not and does not matter that there are seriously different theologies between us—and our solidarity in some things does not mean that differences do not exist. In a real and authentic way, though, we are on the same team—the “Tikkun Olam team” if I can take that particularly Jewish concept of repairing the earth to be my own, as well.

Not long ago, his grandson was required to visit a religious service of a religion not his own, and Rabbi Gendler, his daughter, and grandson all came to the Orthodox Divine Liturgy with me.

What a blessing it was to stand with this spiritual father, long after my own parents had died, and to experience, once again, the mystery and gift of unexpected kin—an unexpected inheritance.

The above image is by Caroline Langston and used with permission.