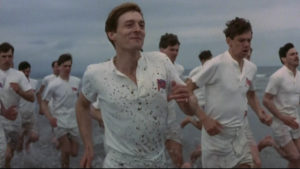 So, why Chariots of Fire?

Why is that what I chose for tonight’s movie? Netflix is recommending all kinds of recent, highly rated titles. Why revisit this old DVD?

Two hours earlier, I’d taken the car, planning to drive north to a waterfront park to work on my novel. I planned to walk along the beach and watch the sun’s long surrender while ideas filled my head. Then I’d veer into the nearest café or pub to scribble down scenes while they were fresh.

A strange way to spend a Sunday afternoon? Perhaps.

For me, it’s as automatic as it was for my father and grandfather to watch Sunday afternoon football, as it is for you to do what comes most naturally, and be what feels most like yourself. Filling pages with story—it’s what I’ve done every weekend since I was seven. When I don’t, I feel like I’m holding my breath.

What is that for you? Maybe running, parenting, or knitting. Maybe you read, hike, fish, or cook.

Just a mile from home, a tremendous fatigue settled over me. I slowed to a stop at a traffic light, turned off the radio. Silence. The light turned green, the road was open, and I may as well have been staring at a brick wall. I couldn’t bear the thought of going forward. The weariness I usually felt after four hours of filling pages with prose—I felt before.

A few minutes later, I was home. And my wife Anne was surprised.

“I couldn’t do it,” I heard myself say. “I got almost halfway there and then…” I fumbled for words.

One word hovered like a bumblebee in front of me—burnout. I shooed it away. My love for writing is never going to burn out. I’ve sworn that to teachers, friends, students, and family. I must write every day, or I don’t feel like myself, I’ve told them.

Anne looked at me for a long time, and said, “Well, what do you want to do?”

Of course, I climbed the stairs to the movie shelves. My fingertips, skimming the spines of DVDs, stopped on Chariots of Fire.

Our film library is like a travel journal of my life since high school, but Chariots of Fire dates back further than that. I was eleven when this movie changed my world. I watched it so often I knew every edit like every beat of a favorite song. Eventually, I absorbed it, and have carried every moment more vividly than memories made since.

As Anne and I relaxed, we heard that familiar, laser-tone metronome that begins one of the most over-played melodies in history. Memories stirred, as if I’d parked my car across the street from a childhood home.

I wrote in Through a Screen Darkly about the community in which I grew up: how it taught me to fear the world, how it treated movies as one of the world’s most corrupting influences. I wrote about how Chariots of Fire turned those people into moviegoers.

We celebrated a film that spotlighted a man who was:

It played like some kind of evangelical fantasy. Oh, how Christians love to see a Christian win.

Not much has changed. Look how common it is for Christian entertainment to feature people who, when they learn to pray or finally commit to Jesus, suddenly win football championships, save their marriages, succeed in parenting, and defeat armies on the battlefield. Look at Tebow-mania.

Never mind that for many of us—for me, anyway—the life of faith becomes not easier but steeper, not a life of dreams come true, but a more difficult challenge of trusting God through one seemingly meaningless calamity after another.

Jesus hasn’t introduced me to a life of surprising successes. Of all of the scenes in the life of my role model, it’s “Let this cup pass from me” that feels most familiar.

And isn’t that just what he promised? Haven’t we been challenged to take up our cross to count it all joy as we experience trials?

Perhaps tales of victorious believers please Christians because we feel that God is glorified. But I often get the feeling there’s more to it. I remember feeling a certain high after watching Chariots of Fire. I feel it in the popularity of Facing the Giants.

We like to feel that we’re on the winning team, and that we have, at least for a moment, impressed the scornful world. I felt that myself and in my community as Chariots of Fire became a hit. The movie made the faithful cool. “How do you like us now, world?”

And when Chariots won Best Picture at the Oscars? It was better than Christmas.

What is more—I was ecstatic to have found a movie that I could enjoy and discuss without guilt or apology. I got goose bumps when pastors mentioned it in sermons. Watching this safe movie became as common an event for Christian youth as games of air hockey and plates of Domino’s Pizza. And yet, Chariots never failed to inspire me. I even spent a summer vacation at the beach reading the movie novelization.

But by the time I entered college, it wasn’t the running races that captivated me. I’d begun to get tired of sports-movie conventions. Instead, subtler threads began to shine. In time, the movie would give me permission to pursue my desire for writing.

And now—two decades after college—it’s becoming something more. As my journal goes unopened and my desire to write runs dry, the movie reverberates like a tuning fork.

I think I know what’s gone wrong in my head and heart.

This post originally appeared on Good Letters on May 17, 2012.

Jeffrey Overstreet is an award-winning film critic, the author of a moviegoing memoir (Through a Screen Darkly), a novelist (Auralia's Colors, Raven's Ladder), and he serves as the senior film critic for Christianity Today. He teaches writing classes and fiction workshops at Seattle Pacific University, and film studies courses for Northwest University and Houston Baptist University. Visit him at LookingCloser.org.