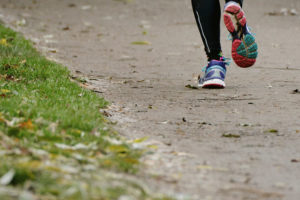 Midway along the journey of our life I woke to find myself in a dark wood,
for I had wandered off from the straight path…

And the reason I had wandered off from the straight path, Brothers and Sisters, was because—for the first time in my forty-eight years on this weary earth, I started doing something I sworn up and down I’d never take up:

I have started running.

I can’t even begin to imagine the level of cognitive dissonance that this revelation must be inducing in my longtime friends. Even before there were European-style oval black-and-white bumper stickers that said “0.0,” with the tiny legend below “I Don’t Run,” there were the “26.0,” “13.5” and heaven forbid, “70.0” European-style oval black-and-white bumper stickers that smarty-pants athletic overachievers put on their Suburus.

And I scorned them all. I not only didn’t run; I was The Anti-Runner.

From infancy to middle age, I was an advocate of cars, air conditioning, and general immobility. Why was this? you ask.

Say what you will about today’s spineless “everybody gets a trophy” youth sports culture, but I would have delighted by such a thing in 1978 (the year that my fourth grade P.E. teacher in public school paddled me for talking in class, in front of about 100 other kids).

In 1978, if you were not at least passably athletic, you were in for it. I was awkward and clumsy, and I was always, always, always picked last for kickball.

A few years later, a satanic football coach and P.E. teacher insisted that I, who had never run anywhere before in my life, was required to run around the football field three times, and no matter how hard I begged at the end of each go-round, insisted I still had to finish. I still remember the Mississippi heat rising visibly in the air, the inside of my nose and throat turned dry and dusty, and when I finally finished the third lap, I’d stumble off the field and vomit.

Only there was no occupational therapy in 1978. And certainly not a nice little boutique outfit that caters to upper-middle class parents anxiously trying to ameliorate physical and emotional deficits. You can complain all you want to about “helicopter parents,” but all of that schoolyard angst did nothing to make me stronger or more resilient, and only made me hide from athletics for the next thirty-something years.

In boarding school, I fulfilled athletics requirements through yoga and community service, and in the meantime, walked around the campus in stiletto heels that would further wreak havoc on my feet.

In college, I became an epic walker, but was too gun shy to participate in any kind of pickup game or other show of external effort, for fear of looking (and acting) stupid. Instead I was the sarcastic person on the sidelines, or the one who went to get the beer.

So imagine my surprise when, on a tepidly sunny Saturday last fall, I laced up the one pair of cheapo athletic shoes—I still called them “tennis” shoes—I owned, did some stretches, put the dog on the leash, and went out and ran a mile and a half.

The next day I got up and did it again.

It wasn’t supposed to be this way, I swear! Running, it had always seemed to me, was religion for people who didn’t have any religion (ditto yoga)—mostly because I had always associated the sport with seeing people out running on Sunday mornings when I was heading off to church in dress and heels. (I know, I know, you can feel the self-righteousness dripping off me.)

Running had its own parallel religious expressions: asceticism, festival (what else are marathons, anyway?), physical ecstasy. So I naturally found it dubious.

In the process of being judgmental, though, I’d forgotten one of the ancient intrinsic beliefs of Eastern Christianity—which is that the body is not merely the container of the soul.

There is no Mind/Body dichotomy, and we are not merely spirits waiting to fly away—which is why Eastern Christianity looks askance at permanent body modifications, and frowns on cremation. The soul is enfleshed, and the body itself is good.

We therefore must care for it.

But I wasn’t thinking about theology or philosophy on the Saturday afternoon I laced up the shoes and ran down the hill, my black lab/border collie yanking on the leash, suddenly freed to chase the squirrels.

It was really my body talking instead, insisting on moving. The dog and I rounded the corner, a few blocks, back around, and up again. I noticed the leaves of the trees against the white expanse of sky on the streets in the newer part of town. There was sweat on my forehead. The dog almost knocked me over.

“But I don’t want to be a runner!” I wrote to my friend Joey in Houston, over email.

“I guess if you run, you are already one,” he wrote back, sardonically.

That, of course, was only the beginning of the struggle, which I’ll write about in my next post.

Above image by Patrik Nygren, edited and used with permission under a Creative Commons license.