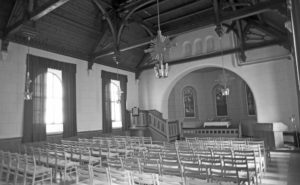 Pastor David—strong, sincere, and confident in his pressed shirt and polished shoes—greets me in the doorway. “This place,” he pauses, looking me in the eye, “is an altar.”

He seems genuinely glad to have an American in attendance, but I am in an entirely different sort of mood.

I’m in Kampala attempting to conduct research on the history of Christianity and medicine, but a staff strike has closed the libraries and archives for most of my trip. And the foreign, bureaucratic process that I hoped would result in a government office’s stamp of approval felt like trying to walk through an M.C. Escher drawing.

Though it is a short trip, I am depressed and lonely. I miss my wife and daughters. But the real problem is not the research or the strike or the distance.

The real problem is that I have been among people for whom faith matters, and not just in the sense of really believing things, but in the sense that they know they wouldn’t be alive—in a strictly biological sense—without it. For them, it is vital, in every sense of that word.

This vitality makes me aware of an absence: What do I have? Do I even believe in God anymore? Does it matter?

As I step into Pastor David’s altar, near the top of the Mulago Hospital complex, I hardly feel prayerful. I take a seat in a folding chair under the fluorescent lights, hoping that my staring at the floor will be taken for piety.

But I am here for research, hoping to find something to extract, analyze, dissect.

Mumbled prayers and hummed praise choruses waft around me as others enter, the smoke from burning trash beside the building passing through on a light breeze. I imagined this would be all that would take place — it was just a prayer service for the renovations at government hospital, whose grounds we were meeting on, after all.

Then come the fifteen-inch speakers, the electric keyboard, and bass — later than Pastor David had hoped, but that is not a problem. He grabs a microphone and addresses the fifteen of us in the small room.

“The world is confusing,” he proclaims. He tells us of a story he just read on Facebook about how Rick Warren, who wrote The Purpose-Driven Life, just converted to Islam and goes by the name of “Mohammad Hussein Warren.” Pastor David can’t believe it; his book had meant a lot to him in college. “But, you see, the world is confusing.”

Then he invites us to begin praying. The music starts softly. The bassist moves in and out of the right key for the first couple of songs. The keyboard’s electronic drumbeat keeps steady time, which is interrupted by the less predictable clanging of welders forging metal hospital bed frames across the street. Stray goats graze and bleat.

The musicians sing, but others are already becoming lost in prayer. The man across the folding table from me, his eyes closed, begins insistently and grows despondent: “Lord, we claim your promises!” He is crying within a few minutes.

The man to my left growls out praises and pushes out his demands of God from somewhere deep in his gut: “You alone are God!” A woman behind me pleads with God in desperate whispers that pierce through the sound.

But the sound swells and swirls — the goats, the welding, the prayers, the cries, the praises, the beats, and the voices and the bass and crackling of the fire and a man is pacing and beating his chest and someone else is kneeling and openly weeping and someone else is doubled onto a table, arms outstretched, and at some point I guess I stand up and I am swaying back and forth with my hands out and I say: “Yes, God!”

The music rises, the electronic beat becomes more insistent. The bass player is with the keyboardist now. There are four vocalists, the choruses repetitive. And then there’s Pastor David. I peek at him every few minutes. I see him give silent, subtle directions to the musicians: always more, louder. The music accompanies him. He could command a stadium, and he overwhelms the twenty-by-forty clapboard canteen. He shouts into the microphone, endlessly, “Come, Holy Spirit!” His pressed purple shirt is blotted with sweat.

Another thirty minutes, maybe forty. Prayers race around me. I’m now floating in voice, in language itself. I open my eyes for a second as bodies wilt and stomp and pace and punch. The music grows louder, louder. The goats, the welders drowned out.

I stand there, swaying dizzily, suspended in that intimate and beautiful moment. Tears run down my face as I dissolve into the prayers.

It was excessive. And that’s the point. The hospital is a place of constraints—even the subsidized, programmed fees can be prohibitively expensive for many Ugandans—but here is abundance.

Here, in stereo, is confidence and power that fills the worn-out canteen and spills out its windows. The Spirit travels on the sound, cascading down the hill, splashing through the concrete vents in the colonial-era wards.

Tonight, those inside them would know that there was more than enough to go around.

Jason Bruner lives with his wife and two daughters in Tempe, Arizona, where he teaches religious studies at Arizona State University.

Above image by Trondheim Byarkiv, via the Municipal Archives of Trondheim, used with permission under a Creative Commons license.