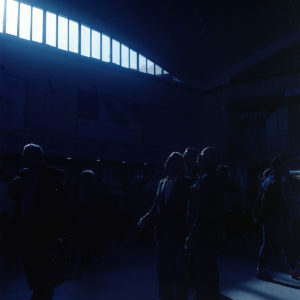 Why is it that we so often gain courage or cowardice to do bad from other members of a group, but seldom the courage to do good? Why is it that the herd instinct kicks in mostly when the object is to tear something to shreds, like beasts? Or when we’re put in fear by a despot and cannot dare to be different from the rest of the craven lot who cower in the shadows, too terrified to stare him down? But when it comes to doing good, it is rarely the case that such a thing is done by cooperative effort.

Only mass catastrophes seem to prove the exception, and even then it is not so much the altruism of the crowd that proves influential as the jarring circumstances that jolt us into a selfless mode. More often than not, the good person must stand alone; the bad always has company.

Sadly, it is not particularly shocking that the American university campus, in increasingly numerous instances, has perverted one of its essential purposes—to provide a free exchange of thought and a civil place for debate. Instead of honoring the constitutive American right of free speech, however unsavory that speech may be in its particular iteration, we now have barbarous crowds who rampage over anything with which they disagree. The “heckler’s veto” has ended all discussion, as those who scream the loudest and shout the hardest foreclose any chance of civil discourse.

The old American saw of “disputing with every inch of one’s being what the other says, but defending with every inch of one’s being his right to say it,” has been tossed in favor of a closed-eared virulence that will not permit any dialogue at all unless it meets an accepted checklist. Those who stray outside the box are denounced with vile labels and parodied in Animal Farm fashion. And let it be said that this point crosses all political spectrums, as free speech is the bedrock of civilization; when Bill Maher, Chris Matthews, and Cornel West decry such a phenomenon alongside Anne Coulter, Robert George, and Mark Steyn, something is amiss.

The mob practices the violent fascism of the totalitarian as they ironically denounce their opponents as “fascists.” Vandalism, fires, and promised threats are the least of it. Berkeley, Claremont McKenna, and Middlebury College administrations, cowardly as they come, apologize to the mobs for not having “listened” fully to their concerns about invited personages that the rioters find so objectionable. This creates the dynamic that the more fires that you set, the more you get your way. The whole idea of tenure was put in place so that academicians could speak their minds without fear of repercussion, and yet the academy has for some time now sided with the censors.

It may be that many of the thugs are imported from outside the schools—professional agitators who roam about the country to stir up violence, funded in some shadowy way that the press does not find interesting enough to look into. But there are enough students and faculty members alike who foment this kind of behavior, the latter to their great shame.

A professor at Middlebury College, Allison Stanger, politically opposed to invited speaker Charles Murray’s position, was asked to debate him. Two sides to an issue being discussed, vigorously but obligingly, is what has set this countries’ schools apart. But in a supreme irony, Stanger was accosted along with the speaker when she tried to insist upon the invitee’s right to deliver his talk. She was physically battered and suffered a concussion for the attempt.

Most tellingly, she said that people she had worked with for years had joined up with the mob surrounding her. The crowd wouldn’t look her in the eye as their voices screamed her down. “They dehumanized me,” she said—people she had known intimately were swept up in the wave. An individual can lose all sense of himself when lost in a frenzy, and he doesn’t have to be a boy from Lord of the Flies to do it, either.

In fact, I doubt many of the people causing this violence would do so alone. The “lone wolf” of the present day terrorist attack scenario is rarer than it seems. For people are markedly worse when they act together; it takes little encouragement to join their wills to that of the crowd. When blood is in the water, the area darkens with figures whose mimetic desire—in the classic sense of that term—is stoked not so much for a taste of the blood, but for a piece of the killing. They are not hungry, but since everyone else seems to be, they have to join in.

The crowd is also good for other bad things, quite the opposite from savagery. The same group that was all tooth and claw can turn into a hiding place, a cloak that each pulls over the other to shelter in, to escape from whatever threatens. People use a crowd to become invisible so that they are not called upon to act, or singled out for not acting, or found out for having acted. Thus, there is a horrible dual-sided treachery to crowds.

The lesson seems to be that we can prove poisonous to each other when we gather in numbers, infecting our fellows with our ill will and our fear. But as that oldest of dialogue explains, when it comes time for the final accounting, there is only room for one in the dock. That there were two bites out of the apple does not excuse either Adam or Eve. Blame-shifting does not carry any weight in the end. The crowd will not be there to stiffen the spine nor to provide a means of escape. In the words of the old poet:

The sins that ye do by two and two, ye must pay for, one by one.

Aboveimage by Zaytsev Artem, used with permission under a Creative Commons License.