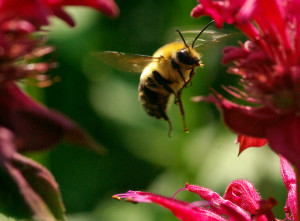 I love this poem for its exuberance. The fat bee, “big as a blackberry,” bumping heavily against the pane. The impossibility of an acorn’s power. The very idea of “infant waterfalls.” Each vivid, particular thing of beauty from the natural world that Friman presents to us bears itself simply and humbly—yet appears remarkable when dressed in Friman’s carefully chosen verbs. There are few poems about happiness that demand my attention in quite this way (Malena Morling’s “Happiness” is one), and I think the secret is in those verbs and images, how they strike against the page like bells. I also love how the quiet, hopeful little word “happy” is tucked away in the middle of the poem, as if the speaker is a little embarrassed to even mention this desire, so certain that the ability to be happy should just come naturally. Should not even be thought of as an ability, in fact, but ought to be her way of being in the world. “To wake/ each day having to slog through scales.” Is there any better description of what it means to be human? So much a part of the natural world, and altogether something else, too.

“The Key” by Alice Friman

The thing about nature is
it doesn’t need coaching. Fire
flares true, first strike out of a match.
Infant waterfalls sing like experts.
Acorns squeeze out oaks, each leaf
a born breather. Even Darwin’s mutations.
Paragons. Every one a prima donna,
a first fiddle.
_____________So is it not strange—
child of nature that I am—to wake
each day having to slog through scales?
Today, I’m practicing happy.
First step—the smile.
I’ve whitened my teeth, massaged all
facial muscles, rouged up, and positioned
myself in front of the mirror.

Suddenly a bee, big as a blackberry,
bumbles against my window, knocking
for attention. Rolling in azalea cups all morning,
she weaves in slow motion then hovers
like a helicopter, humming
to herself. The key, C major.
No black notes, no sharps, no flats.
Only naturals—the fan of her own wings,
the bliss of her own buzz.

She doesn’t practice.
She doesn’t have to. She knows.
To make honey, you follow the dance.

Alice Friman’s new collection is Vinculum (Louisiana State). Her last two books are The Book of the Rotten Daughter (BkMk) and Zoo (Arkansas). New work appears in Georgia Review, Boulevard, New Letters, and the 2012 Pushcart Prize anthology. She is poet-in-residence at Georgia College & State University in Milledgeville. Her podcasts, Ask Alice, can be seen at Alice Friman at Georgia College.

Above image by Ano Lobb, used with Permission under a Creative Commons License.