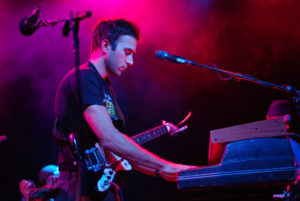 When Dante finally sees Beatrice near the end of the Purgatorio, he quotes Virgil’s Aeneid in the presence of his guide, Virgil himself. “I know the signs of that ancient flame,” he exclaims, transforming Dido’s doomed hailing of Aeneas into a renewed celebration of Beatrice as Beatitude, as icon of God instead of fetishized lost love-object.

But when he turns to look for Virgil, Virgil is gone.

I remember reading the Purgatorio for the first time one summer at Jesus College, Cambridge. I spent most of those months either sitting on a bench by the river reading Dante or walking around town listening to Sufjan Stevens. The two blurred together; the finger picked outro to Stevens’ 2010 album, The Age of Adz, felt especially like Dante to me: longing-drenched, somehow beckoning beyond itself. Stevens has always had the trick of transcendence.

The more I listened, the more I heard Adz as an Inferno for 2010. Vague romantic obsession and fear of death abound; Stevens’ “impossible soul” is felt as some kind of ghost in a machine, cause for anxiety rather than for celebration. “I’m suffering in touching ordinary bodies,” he confesses.

A synth and vocoder-ridden fracas complete with f-bombs and an air of alternating flippancy and despair, Adz is not the most likely beginning to the twenty-first century’s first Christian epic. But for me, that’s just what it became: an Inferno for the end times, tailor-made for an era in which books like Rod Dreher’s The Benedict Option announce the onset of a new Dark Ages.

Dante came at the end of what we now call the Middle Ages; Stevens comes at a time when the end times have become a journalistic commonplace. The apocalyptic warnings of the Inferno hardly measure up to the portentous heave of the title track, “Age of Adz.”

Stevens’ 2015 follow-up Carrie & Lowell reminded me again of Dante, its wistful indie-folk reminiscent of the Augustinian, desire-drenched melancholy of the Purgatorio. Throughout the album, Stevens struggles to purge a crushing sense of abandonment at the hands of his recently deceased mother Carrie, and of a lover, “John.”

He does not manage to shunt these struggles to the side or even to transcend them in any simple sense: the Purgatory of Carrie is a place where, in Stevens’ words, “history speaks,” and he doesn’t always like what he hears. He finds, by the album’s end, not easy answers but Christ—the Christ who warns us, as one song puts it that, “there is no shade in the shadow of the cross.”

As a student of medieval literature, I began to wonder whether these albums represented some intentional design around Dante’s Commedia, something like the way the Coen Brothers’ O Brother, Where Art Thou? loosely follows Homer’s Odyssey. I could not hear the words of “Carrie and Lowell”—“I will bow down / (Dido’s lament) / Lord of the ancient waters”—without thinking of Dante’s own invocation of Dido: “I know the signs of that ancient flame.”

Neither could I help noticing that Stevens’ just-released Planetarium (June 9, 2017), like Dante’s Paradiso, moves through the planetary spheres, nor that Planetarium opener “Neptune” celebrates “some great white rose,” summoning up the image with which the Paradiso concludes. The ends of Adz and of Carrie even bend toward the sonic palettes of Carrie and Planetarium, recalling Dante’s own practice of concatenating the chapters of his trilogy.

Though he has expressed interest in composing a kind of Wagnerian “complete work”—“I want the song to contain the universe, and the universe to be contained in the song”—it seems unlikely that Stevens himself had any such consciously grand designs. But even if he did not, what I can’t help but hear as an Adz–Carrie–Planetarium trilogy may still represent a Divine Comedy for what Stevens has called a “post-God society”: a roadmap of our characteristic failures, and of the purgation required to locate in ourselves—in a society without God—our own persistent, ineradicable desire for him.

The suggestion that behind every one of our desires is a desire for God is an old Augustinian idea, an idea almost unintelligible to most of us today (Christians included). But it is an idea Stevens breathes into life again, an idea encapsulated beautifully in the defining lines of “John My Beloved”: “Jesus, I need you, be near me / Come save me from fossils that fall on my head.” It is hard to listen without sharing somewhat in that longing.

This is the meaning, to my mind, of the final lines of the three album cycle—at the end of Planetarium closer “Mercury”: “Carrier, friend / Where do you run?” The longing for Stevens’ mother Carrie and the longing for a lover, the “friend” of Carrie’s “John My Beloved,” are also longings for Christ.

The realization of Christ’s closeness in and through those deprivations is the only possible non-reductive answer to those unrequited desires. If there is “no shade in the shadow of the cross,” there is no easy consolation outside of this identification of Carrie as “carrier” and John as “friend.”

Taken as ends in themselves, these love-objects drag the album cycle’s singer deeper and deeper into self-effacing suffering; taken as signs, as “carriers” on the way to Christ, they become life-giving again. As T.S. Eliot wrote, quoting Julian of Norwich, he is the “ground of our beseeching.”

A recent pope said that all proofs of the church reduce finally to the works of art she has produced and the saints she has fostered. The trio of albums I cannot resist characterizing as a kind of electronic-folk Divine Comedy is one of those works of art, those strange efflorescences of Christian life, which bear, even now, the signs of that ancient flame.

A Kentucky native, Adam Horn is a PhD Student studying Medieval English Literature at Columbia University in New York City. He has published writing for the Norton Annotated Peter Pan and Mic.com, and writes songs for his Brooklyn-based folk band, Rookin. He first studied Dante under Robin Kirkpatrick at Cambridge University.