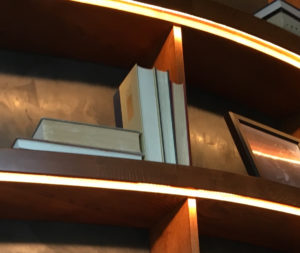 The picture you see to the left is of a bookshelf in a local Starbucks. This is no regular Starbucks, but the fancy kind you find in big cities, where they have long bars at which people can sit upon artisan-crafted stools and have artisan-made coffee served to them in pottery out of Bunsen and beaker-type contraptions, likely forged by artisans.

When did that word become such a big thing anyway? “Artisan”? It seems meant as one of those virtue-signaling terms that implies that the maker and the purchaser enjoy better quality stuff than the everyday Styrofoam slob who doesn’t care about free-ranging and fair-trading. Even McDonald’s now makes sandwiches on “artisan” bread—and they’re pretty darn good sandwiches too (McDonald’s doesn’t really look like itself anymore, which has thrown me for a loop, I’m here to tell you. But I’ll leave that for another day).

Just in case it’s not clear, all the books on this shelf are facing backwards. The spines have been turned to the wall as though the volumes were a bunch of bad children that had to be punished. It’s not possible to go up and pull one of them down to see if it’s a real book or not, as I want to do. The shelves are against a wall lined with artisan-wrought tables at which people sit, drinking their artisanal drinks, their own faces made up in the backlight of one type of screen or another as they telecommute and Snapchat.

Now, the truth is, books have always been used as décor. Whole sets of encyclopedias, leather-bound classics, and even law reporters have been employed to bring a certain je ne sais quoi to the shelves of homes and offices. Nobody is being fooled and nobody is really intending to fool; the books are used for the effect only, adding their part to a collage of erudition along with trays of beach glass, busts of Pericles, and globes so dated that Czechoslovakia still sprawls its way across Eastern Europe, and Beijing is still spelled “Peking.” I’ve even seen places that bring off a type of trompe l’oeil effect by using a veneer of book spines, made rather like a sheet of Lego, to attach against the wall as a faux bookcase.

But this thing here—with the books turned around so that the blank pages are used to achieve the result? This is something new. Before, the impression was always achieved by way of the spine, the part that conveyed meaning—the title and the author, etc. Now, in this use, the book is employed explicitly for the textless side, the blank edges that—when together—form sets of beige blocks aligned for their geometric contribution and nothing more.

In another way, the books here are like those baskets full of wicker balls that they put on the coffee table in extended stay suites and apartment lobbies. In both instances, the familiar things are reduced to their basic shapes, their constituent outlines. No more is needed or wanted from them, certainly not a reference, however fake, to an ages-old established culture. There is no pretense of using the book qua book in this place, not even as artifact. Instead, it is has become a convenient, culture-free abstract shape. In the open-globe world of the coffeehouse interchange, books—which have always pointed not only to a particular topic, subject, and set of ideas, but also to an ethos and structure of principles to which they relate—have been “repurposed” as wallpaper.

I haven’t noticed this phenomenon in other establishments yet—it may be that it’s all around me and I just haven’t been paying attention—but it’s not without irony that such a thing is happening in the great multi-cultural salon of our times, the Starbucks drinking palace. For reading goes on all over the place in these locales, but from screens of course—phones, laptops, tablets and whatever else can be pixelated. So this milestone in interior decoration should not necessarily lead to a commensurate bemoaning of a loss in literacy (though some have questioned, with reason, whether literacy as we have always understand it is not in fact becoming reduced rather than enhanced in the digital age).

Instead, the cautionary alarum is in the nature of one that questions this modern tendency to abstract even that which has been so foundational to cultures. This is the globalizing tendency to scrub things clean of meaning, of ideas and concepts that take a stand, that form a shape, that point in one direction instead of all. A book without a spine excludes no one—not on the level of either intellect or taste—but then a book without a spine is rather unlike a book at all.

Just like a man without a spine is…well, you get the idea. I don’t have to write a book about it.

Above image by A.G. Harmon and used with permission.