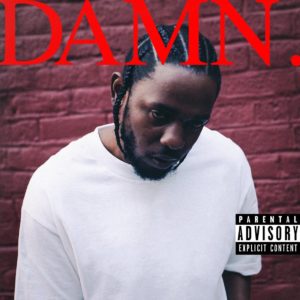 It occurs to me each time I listen to Kendrick Lamar’s new album, Damn: The award winning and much celebrated rapper laments over and over that he feels like nobody’s praying for him. It’s his greatest fear.

I’m not sure you can listen casually to a Lamar album. Each song demands attention to every word. Each song puts you on edge: Which of Lamar’s personas or characters will speak next? At the sound of Lamar’s anxious voice, we become anxious for some resolution.  It is no time to relax. Too much is at stake. He bends the past, with all of its scars and regrets, and the future, with all of its hopes and fears, into the present. The moment of decision is always at hand.

Lamar guides us along his wayfaring path where confronting his fearfulness shapes a fearsome faith. He shepherds us, trying to “find a way to make it on this earth.” You could say that “Kung Fu Kenny”—Lamar’s new persona—recognizes and seizes life’s opportune moments when he is threatened from both within and without. The problem is Damn provides no easy way.

“Fear” is the single word that reverberates across the entire album, if not Lamar’s entire career. The first verse reveals Lamar at seven-years-old, receiving persistent threats to get his “ass beat” for any misstep. At seventeen, Lamar panics at the likelihood that he could be killed by gangs or police. At twenty-seven, Lamar suffers the anxiety of being a successful Black American. In his fear of losing everything and going back to the way things were, Lamar wonders if Job’s plight will be his.

Lamar reminds us of God’s wrath against sin, but just as many moments offer a different view about the beginning of wisdom. Fear of God is seeing our inability to know and control everything. The wisdom of accepting these limits, even as we strive, animates Lamar’s music. In his voice and storytelling, he expresses the whole of the human experience—including the wondrous, but often frightening mystery that attends mortality and finitude.

In the final verse, Lamar is blunt about what afflicts him now:

I try to distinguish the lines between Lamar’s personas; between the voices of his past, present, and future selves; between his self which is tempted by lust, and his self which longs for love. The lines remain but are more difficult than ever to determine.

This is true of each song. It’s also true of how Lamar pairs some songs: “Humble” follows “Pride”; “Love” follows “Lust.” The album’s end returns to the beginning.

The past and future circle to one another and meet in the present moment. In a cyclical manner, we are continually faced with decisions that each day shape who we’ve been into who we are becoming, decisions that also shape the lives of others.

Kung fu originally involves any study or practice that requires energy and patience to complete. Lamar’s voice indicates the discipline of self-defense and spiritual growth. If what defines Kung Fu Kenny is the spiritual practice of seizing the opportune moment, then it may have been inspired by just such a moment between Lamar’s father and his label’s CEO, Anthony “Top Dawg” Tiffith. Lamar tells the story on the album’s final track, “Duckworth,” which is Lamar’s family name.

Long before he would meet Lamar, Top Dawg planned to rob a KFC where Lamar’s father, “Ducky,” worked. Unaware of this threat, Ducky often showed generosity to Tiffith, regularly giving him an extra biscuit or chicken. Tiffith decided not to commit the robbery.

About this encounter, Lamar beckons, “Pay attention, that one decision changed both of their lives.” We must see that this moment is more than a point in a chronology.

You take two strangers, and put ‘em in random predicaments
Give ‘em a soul, so they can make their own choices and live with it
Twenty years later, them same strangers, you make ’em meet again
Inside recording studios where they reapin’ their benefits
Then you start remindin’ them about that chicken incident
Whoever thought the greatest rapper would be from coincidence?
Because if Anthony killed Ducky, Top Dawg could be servin’ life
While I grew up without a father and die in a gunfight.

The album’s end returns us to the beginning, but we’ve been given a special sense of each moment in between.

Say that Ducky’s graciousness to Tiffith and Tiffith’s decision to undo his planned robbery together formed a propitious moment. It was even something like a prayer—intentional or not—because it was belief embodied that now, or later, the decision would find its way.

Say that this moment remains—collects with a bunch of other moments, both before and since that one, to now form an album. When we listen to the album it reminds us that we must resign ourselves to the fear of losing our lives. Yet, by this resignation our lives might be returned to us because the human creature may not have it all under control, but all is given. Damn!

Say this essay is a prayer: That Kung Fu Kenny and his formidable following will now and forever seize the opportune moment.