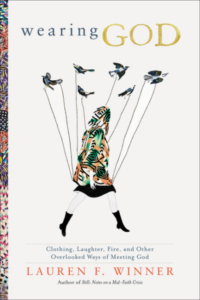 Each chapter of Lauren F. Winner’s book, Wearing God: Clothing, Laughter, Fire, and Other Overlooked Ways of Meeting God (HarperOne), explores a single biblical image of God through a mix of exegesis, cultural history, and personal essay. I asked Winner about her new book, her love of history, her punctuation, and the politics of writing about the Bible.

Mary Kenagy Mitchell for Image: Could you talk about what you think makes a good history book, the kind you like to read?

Lauren Winner: I’m interested in histories of daily life, of ordinary people, and less in the history of ideas. Though even as I say that, I see a false dichotomy.

I have just read an amazing study of women in nineteenth-century southern households, Thavolia Glymph’s Out of the House of Bondage. There, the history of daily life is absolutely inseparable from politics, from ideas about (as well as practices of) slavery, freedom, and power. As Glymph puts it, to talk about freedom in the postbellum south is to talk about wages and political participation, but it is also to talk about:

Virginia Newman’s idea of freedom: “a blue guinea with yaler spots.” This was Newman’s first “bought dress,” and it represented, for her, control over her “whole life” and, concomitantly, the diminished control white people had over it.

There you have it: state power, consumerism, ideas, and what I’ve unhelpfully glossed “daily life” all rolled into one—and rolled into one in such a way as to diagnose the political work that my own depoliticizing language of “daily life” actually does. I am interested in books that draw, or expose, connections between the daily and the political, the kitchen and the state, the object and the idea.

Image: Wearing God might be your most political book. Was that a surprise? I’m thinking, for instance, of the section in the chapter on bread where you write about the advent of white, factory-baked bread in American households, and why it had such appeal—a story which, you write, is “entwined with our national history of shaming immigrants and shaming women.”

LW: I’m interested in the history of the church in the United States: how Christians see and respond to major events. When I write about the history of the white bread loaf, that’s partially a story about people engaging in the early twentieth-century sanitation movement—and it’s also a story to do with larger national discourses about immigrants and women and women’s work. I’m interested in how Christians qua Christians and churches engage those questions.

In writing the book, I noticed that every chapter does make some kind of political or ethical turn, usually near the end. There was some intentionality about that. The Bible doesn’t have anything to say about America per se, but it’s of course a deeply political text. It’s interested in how power is and might be arranged.

It’s hard to imagine a faithful reading of the scriptures that doesn’t pay some attention to that. I don’t think that’s the only thing to pay attention to, but the arrangement of power is a register that seems to me to be almost always at play. How could it be otherwise? One of the questions on the table when we read the Bible could always be, what ethical invitation is being issued here?

Image: I’d like to ask you about punctuation. In Image we typically hew to the Chicago Manual of Style, which means we prefer lowercase pronouns for God and Jesus, but you argued for capitalized pronouns, which you use in the book. Could you talk a little about why?

LW: This has always been my practice, and I’ve always had to argue for it. In magazines one often loses the argument. The bottom line for me is that it’s good to have linguistic markers of the way that God is different from us and therefore requires strange speech. I have some formation in this from Judaism, where there’s a practice of writing “G-d,” to avoid fully spelling out God’s name. That’s done for a different reason than capitalizing God’s pronouns, but it’s another orthographical marker of God’s difference.

I assume the history is monarchical. Capital letters tend to signal importance. But saying that, I realize I don’t really know the history of capitalizing God pronouns. Something new to research!

In this case, the whole book is about language for God, and the vast majority is about using ordinary language to try to say something about God. But there needs to be recognition that God requires unusual speech, and when I write about Jesus, the capitalized He’s and Him’s and Himself’s are a reminder of that.

Image: What are your hopes for the new book, now that it’s done?

LW: I think it’s my richest and most interesting book, and I hope it finds its people. Usually in these pre-publication weeks, I feel like what I’ve written is absolute dreck and should be buried in the garden or in a cave or in a trashcan—but this book, I must say, I just love. It’s not perfect, of course, but I think it is engaging and spiritually provocative.

I did struggle to write it. I rewrote two chapters top to bottom after the copy edit. And there are two paragraphs in the first chapter that I rewrote something like eighty-eight times, and then rewrote completely again at the eleventh hour. I finally landed on what the paragraphs wanted to be, and I think they’re great. It was only when I had finished the book that I realized that.

To some extent, with all my other books, even my one academic book, there was a feeling of trying to fit myself into some shape, of writing to make myself different, or writing as disguise. Wearing God is the first time I haven’t felt that way. I haven’t felt like I wrote it to try to change myself. Ironically, of course it did change me—it gave me a deeper relationship with God. The book feels like it fits me the way a well-fitting dress fits, and there’s a pleasure in that.

Lauren Winner is an ordained Episcopal priest and the author of Girl Meets God, Real Sex, Mudhouse Sabbath, and Still, which won the Christianity Today Book Award in Spirituality. She teaches at Duke Divinity School in Durham North Carolina, and is a faculty mentor for Seattle Pacific University’s Low-Residency MFA in Creative Writing. Her articles have appeared in the New York Times Book Review, The Washington Post, The Wall Street Journal, Books & Culture, and other periodicals.