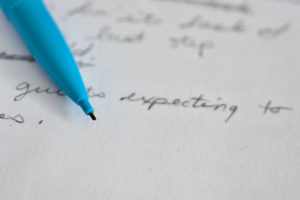 When a former MFA professor asked me to come to her class and speak on revision, I immediately said yes. Not only was she a writer and an academic that I respected, there had been an ongoing, semi-inside, joke between me and some of my MFA cohort members about my desire to be acknowledged by this particular mentor.

And then—naturally, no big deal, so whatever—we’d become friends. I sent those same guys an e-mail with the subject Friendship Update and we all laughed.

The invitation came in January, a solid five months before I’d stand in a room of other writers and talk about revising book-length manuscripts. The length of advance notice seemed like an extravagance. Or at least, enough time that I wouldn’t need to immediately begin preparations.

And in the back of my head, a quiet voice reminded me that I was basically a pro on this topic. I’d revised enough book pages to choke a cow. Or at the very least, enough to feel comfortable putting the presentation on the backburner until, say, a month before I was to make the drive two hours north.

At the time, I didn’t know I would be stuck in the mud of my own revision, struggling with a book that is not only the best thing I’ve ever written, but also carries an immense amount of personal meaning. The other novels I’ve published are by no means lesser. But this one’s been rattling around inside me for fifteen years. It’s ambitious from a craft perspective, but also from a place of my own investment with the story.

For the first time, I felt like I was risking something and it was simultaneously exhilarating and terrifying.

All that to say: I was really, really worried. I wasn’t sure I’d be able to do the idea, the characters—any of the book—justice. Every revision was nothing but spinning wheels. Doubt began to peek over my shoulder, snickering as it is prone to do.

Suddenly it was a week before the speaking event, which happened to also be a week before I was supposed to send this new revision to my editor. And because I was a professional, I did what any person would do.

I freaked the hell out.

What could I possibly teach anybody about revision? Like so much of writing, revision is impossible to explain. There were some tricks I’d picked up along the way, but each was personal and hard won. They felt like a duct tape and cardboard window way of putting a book together.

Sitting there trying to prep a two-hour lecture, I couldn’t even go philosophical, drawing correlations between revising and life. At best, revision makes me a worse version of myself, completely unable to accomplish even the most meaningless task. In the latest five-week bender, I didn’t pay half my utilities, forgot to take my son to a track meet, and basically stopped being involved in any of our family’s dinner preparation or cleanup. The true low point came when I took some heartburn medication with a 5-Hour Energy shot and called it multitasking.

I’m pretty sure this isn’t why I had been invited.

Of course, I know what they wanted: tips and tricks. Reasons to keep moving forward. Permission, perhaps. One of the first things I learned about writing is: it kind of sucks. It’s democratic in that way. There isn’t a single writer I know who doesn’t have a seriously existential story about their craft. So, the question of how to make this easier, or better, is honest.

I just didn’t have the answer.

When I arrived at the retreat center, it was empty and—with the blessing of the site manager—I went exploring. Toward the back of the building was a small chapel that, unsurprisingly, was locked. I peeked through the windows and didn’t see much. A few benches. A simple font presumably filled with water.

It was for the best; I only had an hour to focus my thoughts. I went back to the common area and opened my laptop, hoping the rambling notes and random thoughts would’ve mysteriously transformed into two hours of gold.

It wasn’t long before the group entered, spiking my anxiety. Before dinner, which I was already planning on working through, they went to visit the chapel. I followed them, hoping to meet a few people before I spoke (and if I’m being honest, to expedite a connection; it’s much harder to boo somebody off a stage when you’ve laughed with them).

We entered the chapel quietly, removing our shoes before entering a set of doors I hadn’t seen in my initial investigation. These led to the inner chamber of the chapel, which focused on a simple labyrinth drawn in a circle of sand at the center of the room. As we sat around the circle, in quiet reflection, I felt my body begin to relax.

I have never been a good contemplative. I’m much too enamored by the idol of answers, of certainty. But in that moment—when I could do nothing but give up—I, perhaps for the first time, understood the theological idea of assurance. No, strike that. I didn’t understand it. I felt it—an inner peace I knew and trusted, even though more times than not I’m certain it no longer exists in my life.

The struggle with revision, of course, is naming something that is ultimately mysterious. It is impossible to tell another writer how their process will unfold. How they will join the ranks of writers throughout time who have stumbled and stumbled until they fall into a collection of words that somehow make sense.

It is always a matter of trust. Because even though we’ve been to the mountaintop before, we’ve forgotten. We no longer trust the small voice inside us that consistently assures us that we’re not frauds, that we haven’t tricked an entire industry into publishing our books.

The lecture went fine. We laughed. A few points were even written down. And at the end, I was confident that I’d poked a few holes into the dark curtain that hangs over all writers. We could now see a little better with this new pinprick of hope.

More importantly—because now you are invested and surely are waiting for an update—after I finished speaking, the professor asked me if I wanted to join her and some of the other students on the patio to drink cheap wine and fight the Minnesota mosquitoes.

I won’t bore you with the specific details, but know that Project Friendship has made some major strides.

Above image by Bruce Guenter, used with permission under a Creative Commons License.