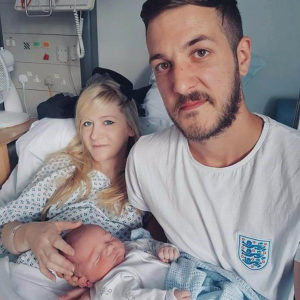 Charlie Gard, the English child you see here, will likely die—indeed, by the time this is published, he may have already died. Charlie has Mitochondrial DNA Depletion Syndrome, which in short means that through some catastrophic chain of rare events, his bodily functions are failing him. No cure has been found for this disease.

Still, Charlie’s parents want to expend every effort on their infant son. They and others have raised millions to do so through various fundraising sites. There are hospitals that have offered to take him on—a one in a million chance at a treatment in America—and the Pope and the U.S. President have offered to aid the parents’ efforts. All know that Charlie has little chance, but want to try anyhow.

But to the world’s amazement, it seems the parents are not going to be given that chance. Through some Dickensian brew of law and situational ethics, an English Hospital, Great Ormond Street, as well as judges—someone named “Mr. Justice Francis” of the “European High Court”—and politicians—London Mayor Boris Johnson, among others, get to say whether it’s time to give up on Charlie’s treatment. And they, not Charlie’s mother and father, have decreed not only that Charlie must be let die, but also that they have the authority to say so.

Somehow, it doesn’t matter how much his parents are willing to do, or how much others are willing to “waste” on a hopeless case. If it’s hopeless, resources are better spent elsewhere, the masters opine—albeit with brows knitted in distress, with grim smiles of understanding at how heartbreaking their decision is “for all concerned.” They assure us their hearts are heavy.

Stunned, Charlie’s parents have asked that he be at the very least allowed to come home to die.

But for an even more unfathomable reason, the Gards are only answered with another patronizing smile, and perhaps a squeeze of the arm, a pat on the head. The government-run hospital has again said no. The Gards apparently didn’t realize that when they brought their child into the English healthcare system, they had lost all right to him.

Indeed, for that matter, this event shows us that no English parent really has a right to his child, in good health or not; the temporary custody of the young is only tolerated by the state, who owns them de facto. This truth will be revealed and exerted if the youth begins to drain state resources. Then the courts will say, without blush, that the state owns them de jure.

If it were not so horrible, the hypocrisy of the state’s position would be laughable. As writer Nicholas Frankovich has pointed out, “If parental rights are said to be sacrosanct when parents want to end the life of their child but not when they fight to preserve it, the principle is not really parental rights, is it?”

It’s not that Charlie’s case is seemingly hopeless that makes the point; that fact only confuses the issue. The point is that these people are assuming the right to do it at all; they have determined when hope should die. And if they assume that authority, and are countenanced in it, why can’t they draw the line elsewhere?

Spare me the slippery slope objection. Slopes are slippery, and we only find out how much after we have plummeted to the bottom.

Think about that, all who so adore the state and its bureaucracies; think about that all those who bow to the technocrats and actuaries, who would cede freedom and dignity to whomever clutches a clipboard tightest and to the many who have jobs they can’t be voted out of; these people say they have more right to this child than do his parents, even when it comes to deciding where he dies.

This is the kind of tight-grinned smugness that always knows what is best—much better than you do—much better than you ever could—because it has the expertise; the office; the degrees. Most of all, it has the power, which it wrests little by little, more and more. That is the easiest way to do it; Toqueville knew this was the creeping power of the state, and its subtlety was its most dangerous aspect:

Thus, after taking each individual by turns in its powerful hands and kneading him as it likes, the sovereign extends its arms over society as a whole; it covers its surface with a network of small, complicated, painstaking, uniform rules through which the most original minds and the most vigorous souls cannot clear a way to surpass the crowd; it does not break wills, but it softens them, bends them, and directs them; it rarely forces one to act, but it constantly opposes itself to one’s acting; it does not destroy, it prevents things from being born; it does not tyrannize, it hinders, compromises, enervates, extinguishes, dazes, and finally reduces each nation to being nothing more than a herd of timid and industrious animals of which the government is the shepherd.

If that is not a centuries-old forecast of exactly what is going on here, there is no such thing as intellectual honesty. And the tragedy is ours, even more than it is that of Charlie’s or his parents’. We allow this, clucking our tongues along with those who smile with so much “care” and “concern,” even smiling with a goodly portion of it ourselves.

Better to trust a child to his parents—whether they be nobles or knaves—just as it is better to keep power and freedom as close to the individual as possible, though he be a noble or a knave. Far better than to cede such power to those in “authority,” who are no more noble, and no less knaves, by virtue of their office, but whose exercise of authority so inevitably leads to cases such as that of little Charlie Gard.

Above image by PA:Press Association.