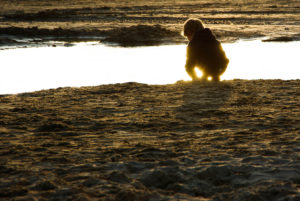 It’s barely even summer and already, in our house it is the Summer of the Guys.

Our son is thirteen now, and in the last few months, the world has opened to him: he and his two best neighborhood friends start planning the day almost as soon as it has started.

Freed to stay at home alone while his younger sister is at camp, he can ride his bike to tennis clinic at the community pool, then pedal back to join the guys for an afternoon of critical dissection of the late 1990s/early 2000s television canon: Frasier, The Office, Everybody Loves Raymond. (Yes, there’s a parent around.)

They flop across floors and sofas, legs sunburned and mosquito-bitten, then turn on a dime, deciding to head down to the neighborhood creek for a hike or off on a bike ride up the steep hill where our troubled local hospital looms, underfunded and un-reimbursed, its helicopter pad beacons flashing white, red, and green.

“He neither toils nor spins,” I once heard tell of a Mississippi Delta lady’s quip about her son, and I look at these boys and I often recall that anecdote. I study them with an almost anthropological interest, and it strikes me that masculinity is something precious and we do not treasure it enough.

That’s not to negate the value of movements to enable others to speak up in their own voices—I, too, was once a girl whose opinions were discounted, and I still, as a woman, get interrupted. I am also well aware that boys of color have never had the freedom and agency to move, seamlessly and with joyous entitlement, through the world. But they ought to be able to, as well—and on my watch, they will.

I just look at the guys splayed across my living room furniture, and my heart catches. I see them as vulnerable and full of grace, and I want with all my will to hear them, and help them.

Just a couple of weeks ago, our town tragically lost one of its finest young sons, and we are going to be a long time mourning him.

He was the youngest child of the family, and had the kind of parents—nuanced, sensitive, faithfully religious but with a sense of humor, too—that anybody would envy. He came to my children’s Montessori school in upper elementary after being homeschooled, and he was happily contrarian and sui generis.

My husband taught a music class as his school co-op job then, and this boy was one of his most enthusiastic students. For the final school performance—which was to take place in a 1920s Catholic church overseen by a strict Argentine order of monks—my husband coached this boy through the Jimi Hendrix rendition of “The Star Spangled Banner,” and when the day arrived, the sound bent the airwaves in the dusty Gothic-style basilica, and curled back the curtains that hung over the old-style confessionals.

My husband continued to teach him a little bit of electric guitar, and occasionally they would get together and “just jam,” but otherwise, this young man went on growing up the way that young people do in a closely-knit neighborhood—seen out of the corner of the eye, or greeted by us at the pool and Mass and holiday fireworks.

Except that this boy had a reputation for the intensity of his kindness, his compassion. He radiated with the glow from the adoration a youngest child typically gets (I know—I’m one myself), but he was never self-seeking, never entitled. After he died, I learned that he would sleep out on the family’s deck on Christmas in solidarity with the homeless.

He went to high school, and then before we knew it, was headed off to college. He grew tall, and his hair got long. He came to be so handsome that I, a middle-aged matron, had to avert my eyes.

I learned that he died when one of my best neighborhood friends called me at work in tears to relay the news, and then the day—the week—fractured even for those of us who were on the periphery of his life, joined only through school, church, and the sidewalks that are our neighborhood’s lifeblood.

My son had already heard the news that day—at the 7-11, where he had ridden on his bike with his friends. My husband was off working in California, and so taking a child on each side, I walked to the outdoor statue of the Blessed Mother at my husband’s parish down the street, and laid three roses at her feet.

The wake was the following Sunday evening, at a nearby funeral home. It was a hot summer night, and the air conditioning strained to cover the scent of bodies, air freshener, and below that, the smell of long-ago cigarettes buried in the plaster walls and carpets. I was plunged deeply into recollection of my own losses, though I cried at how my children—of their own accord—stood stoically in the formal clothes that they had insisted on wearing.

Hundreds of people were there: It took us a full hour and forty-five minutes for our little family to wind through the receiving line that snaked through all the funeral home’s strange set-like parlors. All the neighbors were there; all the boys and girls. White and black in equal measure. I gave a hug twice to a neighbor, at two places on the line an hour apart, when we caught each other by eye and both got close to tears.

At last we arrived to give his parents a hug—I was humbled, for their greeting was personal beyond what I would have ever expected. And then we were at the open casket, and I kneeled, and prayed. Around me, others just sat. It was as close a vision to eternity as I have ever seen.

Bless the parents. Bless this boy.

Above image by Steven Powell, used with permission under a Creative Commons License.