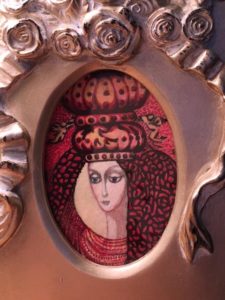 Before a metastasizing cancer had fully whittled away her quality of life, my mother left me, on a cold November morning. I found her slumped over the bathtub in my New Hampshire home, just steps away from the guest room where she often slept. I did not rush to her rescue, or to move her from the odd position she was in. Though I said “Mom?” I knew she was dead.

At the hospital, what I remember were my mother’s coral painted toes sticking out of the end of the sheet that lay on top of her. We had just had pedicures together a few days before. Coral was also her favorite lipstick color. The perfect color to set off her summer tans and complement her pale blue eyes.

When I was a child, she’d had an oversized mohair sweater this color that I’d often wrapped around myself, attracted to its fuzzy softness and warmth and the faint scent of her perfume. Now, though I wanted to fall onto the gurney, lie next to her, bury my head into her breast and hold onto her, I merely patted her cold papery-skinned hand.

A light touch. My final good-bye.

A few months later, in early spring, I was in New York on a business trip. Grief still played around the edges of my subconscious, in its shadow forms: sleeplessness, anxiety, outbursts of anger, lying hidden in the folds of my comforter on weekends for endless hours. I did not feel connected, then, to any faith that might have eased this wrestling with grief.

During an afternoon of free time, I started walking up Fifth Avenue, planning to meander over to Madison Avenue, where I would end up at Bloomingdales, my personal mecca. Instead, I found myself drawn up the stairs and through the massive bronze doors of the chapel of St Patrick’s Cathedral.

I had not been into a church in years for the purpose of worship. Not even for my mother’s funeral. Though a Catholic by baptism, she had not wanted a church funeral or burial. Abiding by her wishes, we had her cremated. The service had been simple. We hired a “rent-a-reverend” who brought a guitar. As he sang “Let It Be” off-key, I wept.

After the ceremony, my five siblings and I each left with a small heart shaped urn. None of them wanted the big urn, so I took that too. I would keep as much of her as possible.

As I walked by the marble basin filled with holy water just inside St. Patrick’s doors, I dipped my finger in. The water was cool and evoked a memory of the childhood church I had disavowed when I was fourteen—the year my mother left the church after our priest told her to flush her birth control pills down the toilet.

I crossed myself, dabbing the water to forehead, heart, left then right shoulder, making the sign of the cross. As a lapsed Catholic, I had no business playing out this ritual. I hoped the water would not burn a hole in my skin.

I turned from the basin, and joined the tourists and pilgrims. Through the hubbub of shuffling feet, cameras clicking, whispers of the devout, crying babies, a familiar, comforting scent from childhood wafted over me: incense mingling with the smoke from burning votive candles. I scanned the faces in the crowd, both in the aisles and in the pews, for recognition that a sinner had entered, but no eyes met mine.

The gothic arches above the long nave drew my attention upward. Streaks of muted light fell from stained-glass windows. Huge pendulum ceiling lamps radiated warm gold. I felt held by the vastness of the space.

I stepped slowly down the left aisle, passing side altars, each built for the worship of a different Catholic religious figure. Soon, I came upon a familiar image. Sitting on the mantle of one of the side altars was a large framed painting of a solemn dark-skinned Madonna, her son on her lap.

The shrine was dedicated to the Polish icon, Our Lady of Czestochowa. I had never seen this image in a public place, but I knew her from my Polish Babcia’s pastels, charcoals, and watercolors. This dark-skinned Madonna was a favorite portrait subject of my devout Polish grandmother.

One precious keepsake of Babcia’s, a small leather bound Polish Bible, somehow ended up with me when she died. I was cleaning out the drawer where I’d shoved it unthinkingly years ago, and found one of her Madonna paintings tucked inside: a tiny oval shaped watercolor. After finding just the right frame for this overlooked heirloom, I placed it on my bedside table, where it provided an inexplicable comfort.

This was surely the same Madonna I now beheld.

I knelt for a long time at the hassock in front of the image, feeling unexpectedly at home doing so. This mother had drawn me to her, first out of the heart of an unwanted Bible, now here to kneel before her in this grand gothic cathedral. As I gazed up, I felt her power infuse the space around me and in me with her blessing and her grace. I lowered my head, closed my eyes and the words of her prayer came back to me with clarity and ease.

I repeated the prayer several times, as I would have done as a child, in penance. I felt her protection, a whisper of condolence and of comforting. All that my own mother had given me throughout my life. So different was this humble embodiment of grace from the reprimanding priest who had chased my mother from her religion, with me in tow. This blessed Madonna seemed at that moment to be a doorway back not only to a mother’s embrace, but perhaps back to faith.

When I finally rose to leave for my other pilgrimage, the one to Bloomingdale’s, both mothers accompanied me.

Ann Weikers lives with her husband and two dogs in New Hampshire. She is a lawyer who recently left a corporate career and is currently a candidate for an MFA in Writing from Vermont College of Fine Arts.

Image by the author’s grandmother, Zofia Krasnowiecki, courtesy of the author.